As of five days ago, the NFA awarded to the private sector the rights to import 660,000 metric tons out of the 860,000 metric tons of rice to be imported for the year, this despite news reports of sacks of rice rotting in NFA warehouses. And rice traders who import the rice would even be exempted from paying taxes.

Who’s not surprised that there’s rice smuggling in the National Food Authority (NFA)? The employees of the NFA and the rice price monitoring group Bantay Bigas, that’s who.

According to Bantay Bigas, the rice smuggling at the NFA is actually “legalized practice,” and that the privatization of the food agency is to blame.

Roman Sanchez, President of the NFA Employees Association (NFA-EA) and member of Bantay Bigas, said that the privatization of the NFA has made the agency more prone to corruption. He said that because of the private sector-financed importation (PSF) policy , rice smuggling has become legal. The group calls the PSF smuggling because commercial traders are allowed to import rice without paying taxes.

Earlier last week, media was furnished with a copy of the audit report prepared by a three-member team hired by the NFA. The reports said that the implementation of the PSF importation from 2008 to 2010 resulted in massive losses for the government. It said that from 2008 to 2010, the NFA allowed commercial rice traders to import a total of 1.4 million metric tons (MT). The NFA also asked the Fiscal Incentives Regulatory Board, on behalf of the traders, a tax exemption worth P20 billion (US$46,511 million).

Bantay Bigas has launched “Brigada Kaldero”, a series of protest actions against continued increases in the prices of rice and other food items, as well as oil products. The group said that farmers don’t need dole-outs and demand that the government implement the National Food Authority’s mandate to ensure the country’s food security.(Photo courtesy of Bantay Bigas / bulatlat.com)

Under the PSF scheme rice traders are allowed to import rice duty and tax free. If they deliver earlier than the agreed upon schedule, the NFA even gives rice traders rebates. The traders then sells the rice they import to the public but with permits and licenses from the NFA. And they get to keep their profits from the sale. This is supposedly part of the government’s “commitment to develop the marketing and entrepreneurial capabilities of the private sector, primarily the farmer organizations.” However, only rice traders have the capital to finance rice importation.

As of five days ago, the NFA awarded to the private sector the rights to import 660,000 metric tons out of the 860,000 metric tons of rice to be imported for the year, this despite news reports of sacks of rice rotting in NFA warehouses. The rights to import were given to 66 post-qualified bidders after the NFA held a third and final rebid of 206,052 MT that were not initially awarded because of some issues. The 660,000 MT comprises 23 percent of the total rice imports for 2011.

“Farmers already suffer from the low prices rice traders pay them for their produce. Because the NFA colludes with rice traders by excusing them from paying import duties, the government becomes a direct party to the attacks against the welfare of farmers,” Sanchez said.

Bantay Bigas spokesperson Lita Mariano in the meantime said it was unjust that the government allows private traders to import rice tax-free and in effect forego tens of billions of pesos in tariff revenues.

“Rice traders don’t have to pay import taxes but the NFA is forced to shoulder lost income and incur debts.

“Who shoulders all the losses of the NFA? Taxpayers and consumers. Rice prices continue to go up, the government continues to impose the expanded value-added tax law. Private traders on the other hand are assured of their profits,” said Mariano.

The NFA continues to be under fire for other anomalies. Recently, the Commission on Audit (CoA) released a report on how the NFA lost P100 billion (US23.259 million) in a span of 10 years. According to the CoA, the loss was because of the NFA’s policy of massive rice importation, buying high, selling low and storing for long periods.

The Kilusang Magbubukid ng Pilipinas (KMP-SMR) said that the money lost in taxes and income could have been used to augment the dire want of agricultural services to farmers. Based on the CoA report, from 2000 to 2009, the NFA’s net losses amounted to P100.921 billion while it received P33.748 billion (US$78. 484 million) in subsidy. The CoA said the agency’s massive losses happened despite government subsidies and that the NFA’s sale of rice and collection of fees were not enough for its operations. The NFA was compelled to resort to borrowings to finance operations and pay obligations.

Pedro Arnado, chairperson of KMP – SMR, said that the NFA committed a crime against the Filipino people by losing the P100 billion.

“Millions of Filipinos continue to starve because of poverty, but the NFA squandered its funds. The officials of the NFA has no right to say that it incurred losses in the process of implementing its mandate to help farmers. This couldn’t be farther from the truth — the NFA is responsible for the massive rice importation which practically killed the local rice industry. This further deepened the sinkhole farmers have fallen into because of the government’s lack of support and subsidy,” he said. “The NFA and the Aquino government should not use farmers to cover for institutionalized corruption.” 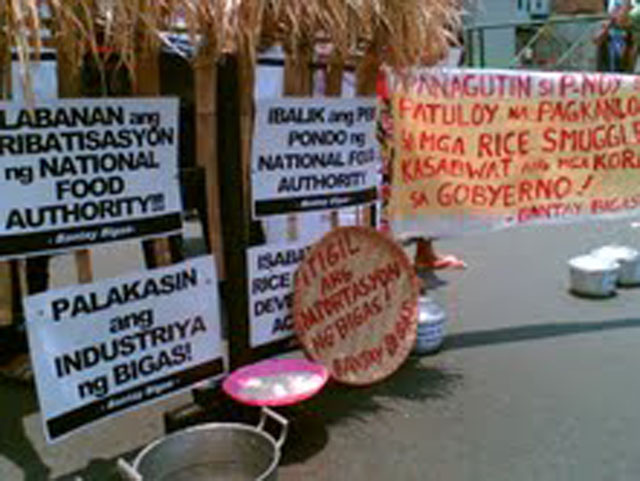 Food security monitoring group Bantay Bigas says that the privatization policy in the National Food Authority is to blame for the worsening corruption in the agency.(Photo courtesy of Bantay Bigas / bulatlat.com)

“Let’s not fool the people. We know better. NFA has been the source of the massive corruption of government officials involved in rice importation. It would be easy to conjure figures just to cover up the billions of money corrupt officials pocketed,” he said.

Arnado recounted reports that imported rice in the last three years of the Macapagal-Arroyo government was overpriced at $125 (P5,375) per metric ton. He also said that some years ago, Senator Francis Escudero also exposed that the government may have lost P5.7 billion (US$132.55 million) to P13.1 billion (US$304.65) in kickbacks in the importation of 1.5 million tons of rice from Vietnam in 2009.

According to the KMP, the dependence of the government on rice importation has diminished the capacity of the local agricultural industry to provide the country ample food stocks and caused poverty of the Filipino farmers who used to be the most skilled rice producers in the Asia, of not, in the world.

Arnado said the bogus land reform law enacted in the time of Pres. Cory Aquino has been inutile in addressing landlessness.