Even the University of the Philippines effectively raised its tuition by changing the “default bracket” of students to P1,000 to P1,500 per semester.

The University of the Philippines (UP) can never again be called the ‘university of the poor.’ Youth group Anakbayan has said that in the wake of the 25 percent discouragement rate of the last UP College Admissions Test (UPCAT), the university made changes in its application process resulting in tuition hikes.

The UPCAT is a five-hour examination consisting of subtests on language proficiency, reading comprehension, mathematics and science. The languages used in the UPCAT are English and Filipino. According to recent reports, out of 70,000 high school students who take the exam, only 13,000 make it. In the meantime, out of that 13,000 passers, 3,000 students are accepted in the main campus in Diliman, Quezon City. 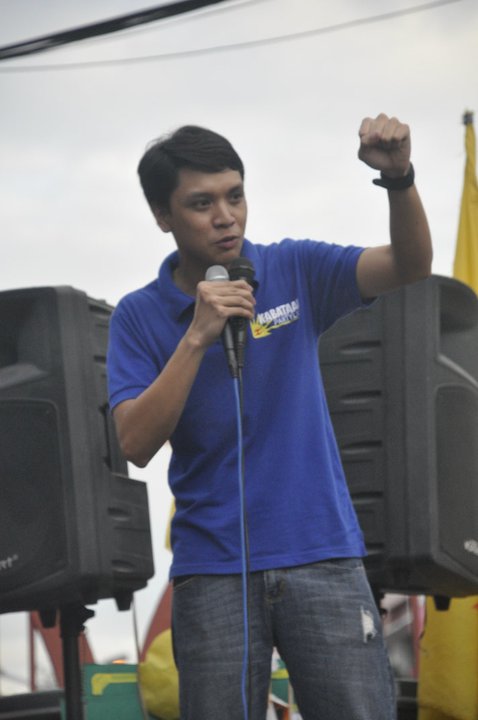 Instead of providing access for poor students, the STAFP has become an instrument for tuition hikes, Anakbayan chairman Vencer Crisostomo said. He added that various student and faculty organizations in UP constantly criticized the STFAP as a “smokescreen” for increasing tuition. (Photo by Kabataan Paty-list / bulatlat.com)

Applicants who take the UPCAT are ranked based on their admission grades which are the combined weighted scores in the UPCAT subtests and the high school weighted average. The top-ranking applicants, based on the quota and cut-off grade set by each campus, will qualify.

According to Anakbayan, because of the results of the last UPCAT exams and the economic background of those who passed, the university made changes in its tuition system and its student tuition program, Socialized Tuition and Financial Assistance Program, or STFAP.

In the STAFP, students are categorized into five “brackets,” widely understood to be a ranking based on their reported household income. All students are assumed to be part of the “default bracket,” and submit themselves to a lengthy application process to qualify for other brackets with cheaper tuition rates. In the Diliman, Manila, and LB campuses, the brackets are P1,500, P1,000, P600, P300, and P0, with P1,000 being the “default.” In Baguio, Pampanga, Visayas, and Mindanao, the “default bracket” is pegged at P600. 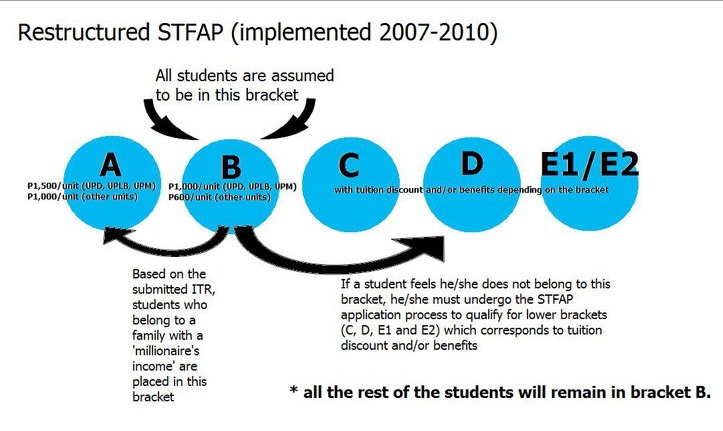 UP has changed its tuition scheme system and the new changes have resulted in a 50 to 65 percent tuition increase. From charging P600 to P1,000 per unit of subjects, UP now charges P1000 to P1500 per unit. (Photo by Kabataan Party-list / bulatlat.com)

“Starting this semester however, the default brackets have been changed to P1,500 and P1,000 per unit, respectively. This, in effect, is a virtual tuition fee increase from P1,000 and P600 per unit,” said Crisostomo. “In light of the growing number of UP entrance exam passers who can’t afford the tuition, this latest development will only worsen the situation.”

Recent news has shown that a full 25 percent of all the UPCAT passers this year chose not to enroll in UP. Some who did enroll, backed out after discovering how much the tuition is.

In an interview with the media, Kabataan Party-list Representative Raymond Palatino said that 1,011 of the 3,826 UPCAT passers this year did not confirm their slots in the university. A total of 303 who confirmed did not enroll. In the meantime, some of the 1,011 passers who chose not to enroll at UP received scholarships from other universities. Forty-one were granted scholarships at the Ateneo de Manila University, nine at De La Salle University, and one at the University of Sto. Tomas.

“Instead of providing access to poor students, the STAFP has become an instrument for tuition hikes,” Crisostomo said. He added that various student and faculty organizations in UP constantly criticized the STFAP as a “smokescreen” for increasing tuition.

“To explain concretely, when the STFAP was first introduced under the late former president Cory Aquino, tuition was raised from P200 to P300 per unit. The introduction of the present STFAP scheme in 2006 was accompanied by an increase from P200 to P300,” he said.

He went on the blame the Aquino government’s decision to continue the policy of slashing funding for state universities and colleges (SUCs.

” This year’s UP budget was cut by P1.39 billion. Under the previous administration, the university’s funding was also constantly reduced,” he said. “There can be no substitute to the government providing adequate funding” he said.

Student protests on June 6 and 13

Crisostomo said that his group and other major student and youth organizations the National Union of Students of the Phils (NUSP), College Editors’ Guild of the Philippines (CEGP), League of Filipino Students (LFS) will lead protest actions such as walk-outs, noise barrages and marches nationwide on June 6 as the school year opens for students in the basic and secondary levels, and on June 13, opening of classes for the tertiary level. Out of school youths are also set to hold protests.

Crisostomo said that the policies of the Aquino government has failed to address the education crisis and has in fact further worsened it.