You Are Here: Home → 2011 → June → 10 → Military officials charged for disappearance of Jonas Burgos

“We have done everything. This is the last bastion. If nothing happens to this, the whole justice system is not working at all. If they will continue to cover up [the crime], then there is no hope for the Philippines.”

MANILA -After waiting for more than four years and the advent of a new government – that promised change – still, her son Jonas Joseph Burgos has not been surfaced despite overwhelming evidence pointing to the culprits: the 56th Infantry Battalion of the Philippine Army. Edita Burgos could not wait any longer. She filed June 9 criminal charges against soldiers and officers involved in the disappearance of her son and those involved in the coverup of the crime.

Named respondents to charges of arbitrary detention or possibly murder are Maj. Harry Baliaga Jr., identified by witnesses as one of those who abducted Jonas; Lt. Co. Melquiades Feliciano, former commander of the 56th Infantry Battalion of the Philippine Army (IBPA); Col. Eduardo Ano of the Intelligence Service Group of the Philippine Army and several John Does and Mary Does.

Jonas Joseph Burgos, son of press freedom icon Jose Burgos Jr., was abducted on April 28, 2007 inside a mall in Quezon City. The license plate of the vehicle used in the abduction was traced to the 56th IBPA. He remains missing to this day. 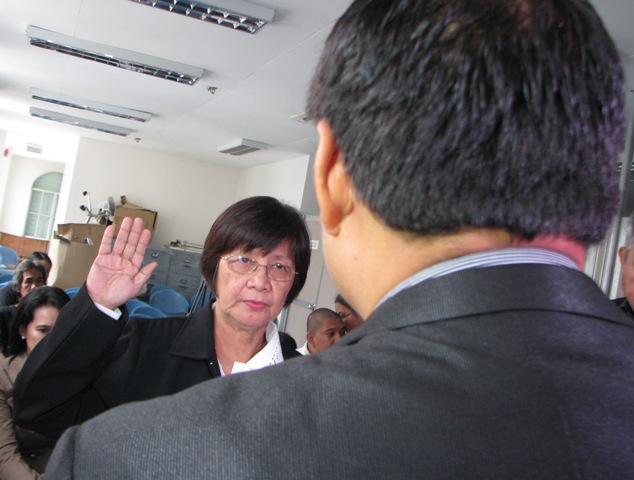 Mrs. Burgos takes oath before Assistant Prosecutor Vimar Barcellano as she files her affidavit-complaint against military and police officers involved in the disappearance of Jonas.(Photo by Ronalyn V. Olea / bulatlat.com)

“We have done everything. This is the last bastion. If nothing happens to this, the whole justice system is not working at all. If they will continue to cover up [the crime], then there is no hope for the Philippines,” Mrs. Burgos said.

Mrs. Burgos said that Jonas was kidnapped by a team directly sanctioned by Feliciano and Ano and comprising of members of the 56th IB and ISG under their direct control and supervision.

Mrs. Burgos said that in the returns filed by these military and police officers before the Supreme Court, all of them categorically denied having custody of Jonas.

“They have displayed a concerted effort to mislead and prevent a true and complete investigation into the disappearance of Jonas Burgos. They knew fully well that the disappearance of Jonas was the result of a military operation… Had they not coddled and protected the officers and personnel of the 56th IB and the ISG, I could have been reunited with my son who remains missing until now,” Mrs. Burgos said in her complaint.

Mrs. Burgos said the PNP deliberately muddled the investigation by presenting false witnesses who claimed that Jonas was abducted by his comrades in the underground movement.

Long search for Jonas, for justice

“…[W]hile we diligently followed the correct process in a land where the rule of law is supposed to prevail, even as I and my family endured the daily torture of wondering what has happened to Jonas, where he is now and what he must be undergoing, the implementers of the law who investigated my son’s disappearance not only failed in their sworn duty to implement the law, but worse and obviously, deliberately refused to uncover the facts,” Mrs. Burgos said in the letter attached to her complaint-affidavit. 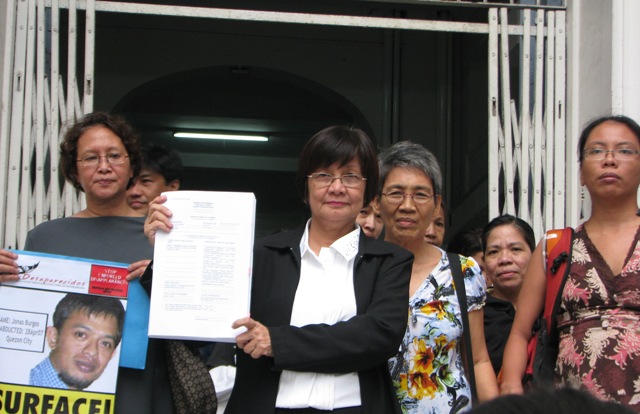 Mrs. Burgos shows her affidavit-complaint. With her are Marie Hilao-Enriquez (left), former political prisoner Angie Ipong (right) and other members of Desaparecidos and Karapatan.(Photo by Ronalyn V. Olea / bulatlat.com)

In May 2007, Mrs. Burgos filed an information with the Commission on Human Rights (CHR).

In June of the same year, she filed a complaint with the Quezon City police and the next month with the National Capital Region-Criminal Investigation and Detection Group (CIDG).

In August 2007, Mrs. Burgos filed a petition for habeas corpus with the Supreme Court and then a petition for writ of amparo in December of the same year.

In August 2008, Mrs. Burgos appealed the Court of Appeals’ decision to the Supreme Court. After almost a year, the high court merely ordered the CHR to reinvestigate the case because of “serious lapses” in the investigation of authorities.

On March 15 this year, almost four years since Jonas disappeared, the CHR submitted its report and recommendations to the Supreme Court, which include the filing of criminal charges against Baliaga who was identified by two witnesses.

“Through the filing of this case, we hope to be a step closer to finding my son, and ultimately attaining justice,” Mrs. Burgos said.

Asked by a reporter if she believes that Jonas is still alive, Mrs. Burgos said: “Of course. I have no proof that he is dead. If indeed he is dead, I’ve been telling them to return him to me. For me, that would be enough. Return of Jonas will be the ultimate measure of success.”