Activists denounce Aquino government’s ‘subservience’ to the US

Carrying banners “Down with imperialism!,” members of Bayan and allied organizations marched toward the US Embassy in Manila, asserting that genuine independence would not be achieved until the Philippines is finally free from the dictates of US.

“Aquino remains a puppet of the US. He did not even do anything about the Visiting Forces Agreement (VFA) even if the US continues to violate and destroy our national sovereignty, he even welcomed the US troops in our country,” Reyes added. 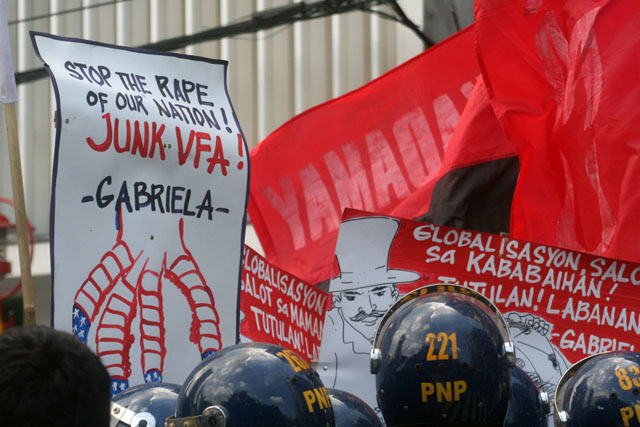 “Is this what they call freedom?” Protesters were blocked by the Manila police in Kalaw.
(Photo by Janess Ann J. Ellao / bulatlat.com)

Contrary to the government’s festive commemoration of 113th Independence Day, various groups paraded different floats depicting burning issues. The float paraded from Plaza Dilao in Paco, Manila going to the US Embassy. Protesters were blocked by the Manila police in Kalaw avenue.

“Is this what they call independence? We are only expressing our grievances against the government and the US and yet our fellow Filipino, these police men are trying to hinder us,” Roger Soluta, secretary general of Kilusang Mayo Uno (KMU), said. 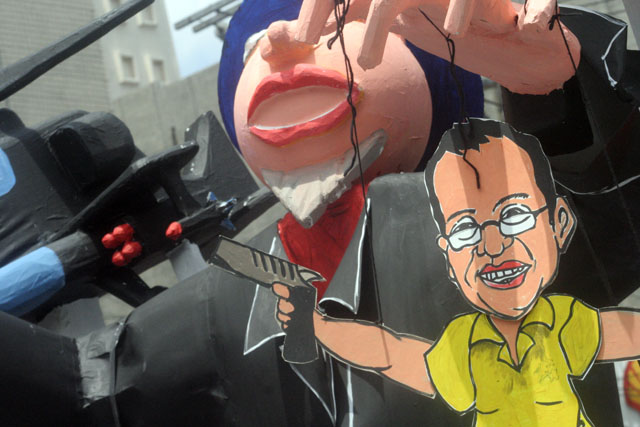 In the government’s commemoration of Independence Day in Kawit Cavite, Aquino claimed that his administration has passed reforms which are “meant to give Filipinos a taste of true freedom”. Vencer Crisostomo, chairman of national youth group Anakbayan questioned Aquino’s claim saying that the President is the most “AmBoy” (American Boy) president the country ever had.

?“It’s not surprising that Noynoy has failed in his own definition of freedom, considering that he is the most ‘AmBoy’ president we’ve had in years,” Crisostomo said.

“Aquino defined true freedom as freedom from hunger, ignorance, poverty, and joblessness. Yet under his first year, the number of hungry, jobless, and poor Filipinos actually increased. There are also a number of school drop-outs also remain numerous,” Crisostomo added.

Soluta also said that the definition of freedom of the government is giving freedom to the US imperialist and big foreign capitalists to smuggle out the country’s economic resources and to abuse Filipino workers. “Aquino’s economic policy favors only the foreigners and not the workers. Instead, they kill our labor leaders and some were even jailed. Is this what he calls freedom?”

Anakbayan stated glaring examples of Aquino’s subservience to foreign interests such as redirecting funds from urgent social services to foreign debt servicing. The budget for state universities and hospitals were slashed by P400 million ($9.3 million) and P4 billion ($9 million), respectively, this year. Funding for housing services remains a measly P5 billion ($116 million). Meanwhile, P689 billion ($16 million) was used to pay foreign and local debtors in the first six months of the Aquino administration alone. Combined with the amounts paid from January-April 2011, the total is more than P1 trillion ($23.2 billion). This is bigger than the debt payments made for the entire year of 2007, 2008, or 2009.??The group said that Aquino also refused to increase the minimum wage due to pressure from the American Chamber of Commerce, Employers’ Confederation of the Philippines, and other groups representing foreign corporations in the country. The Aquino administration ignored data which show that a P125 ($2.9) across-the-board nationwide wage hike will cost enterprises employing at least 20 people a mere 15 percent of their combined profits.??Anakbayan said that Aquino also allowed the continued presence of U.S troops. Despite widespread opposition, the Aquino administration continues to ignore calls for the scrapping of the VFA. Instead, it was rumored last month to be entertaining plans for a return of the U.S military bases in the country. It has also kept silent about the permanent presence of 700 American soldiers under the Joint Special Operations Task Force-Philippines which maintains its headquarters in Zamboanga City.

Joms Salvador, deputy secretary general of Gabriela also said that June 12 is also commemoration of the people’s dire situation due to poverty and exploitation because of the US dictates to the Philippine government. “It is not that the President doesn’t know what to do about the crisis, but because he is bound to follow the dictates of the US that is why there is crisis. Until the government is hell-bent on following the dictates of the US then the people’s prospects of relief is not clear.” Salvador said.

Begging for US intervention in Spratlys dispute 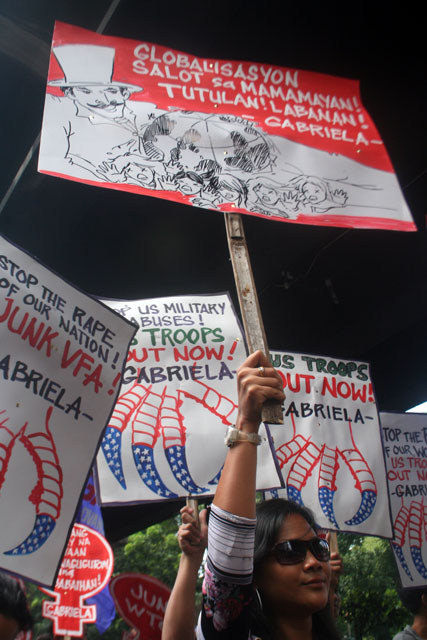 In a statement, Elmer “Bong” Labog, chairman of KMU said that the Aquino government is issuing war-mongering statements against China while almost begging the US to intervene on the issue by asking the latter to sell weapons to the country and expand military presence here. “It is celebrating independence while showing nothing less than colonial subservience to US geopolitical interests in this part of the world.”

Meanwhile, according to Act Teacher’s Party-list Rep. Antonio Tinio said that it’s deeply humiliating for Palace officials and Senators to repeatedly state in public that, if push comes to shove, the Philippine government expects the United States military to come to its aid in asserting our Spratlys claim versus China.

“Now a US Embassy spokesperson has shattered their long-held and deeply cherished illusions by flatly stating that the US will not involve itself in territorial disputes in the South China Sea. This statement makes it clear, once again, that there’s nothing ‘mutual’ in the so-called Mutual Defense Treaty–the US will act in accordance with its own interests regardless of any delusions our ruling elite may have regarding the country’s ‘special friendships’ with the US.”

Crisostomo also said, “Their script is predictable: on the grounds of China’s bullying, we will ask for help from our supposed long-standing ally, the U.S. First, we will be given more arms, then more U.S troops, and then eventually the return of U.S military bases” said the youth leader.
“We should assert our national sovereignty on our own terms, instead of allowing ourselves to become the battleground of a U.S proxy war with China” he added.