“I was once a laborer, too. I have worked at various jobs just to be able to feed my family. I know how it is to work hard and to subsist on meager wages.” – Rep Manny Pacquiao

MANILA – He may be about to move into a renovated house in Forbes Park, the Philippines’ toniest address, and he may be one of the globally famous athletes with net worth huge enough to land him on Forbes magazine’s annual listing of billionaires. In Philippine congress, he is one of the richest lawmakers based on these lawmakers’ declared assets. But boxing icon and now lawmaker Manny Pacquiao still has not forgotten the working people’s poverty and low wages. It was where he and his family had come from, he said.

“I was once a laborer, too. I have worked at various jobs just to be able to feed my family. I know how it is to work hard and to subsist on meager wages,” Rep Manny Pacquiao told the media in a press conference Tuesday. He joined Anakpawis Partylist Rep Rafael Mariano in urging their fellow lawmakers to legislate a P125 nationwide across-the-board wage hike.

“It is not really much,” said Pacquiao in Filipino, referring to P125. “There is a need now to pass the P125 wage hike bill,” he stressed, adding that it has languished long enough in the legislative mill, and the current wages in the country have long stagnated in its low, insufficient levels. Pacquiao pointed to the fact that the current minimum wage rates are less than half the needed amount for a family to decently live on. 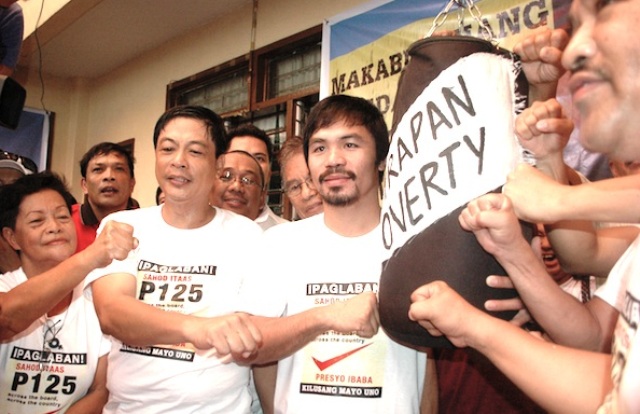 Asked about the possibility of job losses and factory closures as a result of the substantial wage hike, for example, Pacquiao said that “That’s the age-old threat they always give to us workers.” But he said it is high time to increase the workers’ wages and that the workers should not be forced to choose between sufficiently decent wages and jobs.

Is he not worried that he may be picking a fight with the wealthiest companies and their supporters in Congress? Pacquiao replied that he was not about to slug it out with them, but in the spirit of unity, he would be “appealing” to them to grant the P125 wage hike.

“The working people are important – without them, we have nothing,” Pacquiao said.

Pacquiao is “not a guest or visitor but one of us,” Rep Mariano told Bulatlat.com. Manny Pacquiao “speaks for P125. We know where he came from. That he’s capable of looking back and standing up for the ordinary wage and salary earners.” 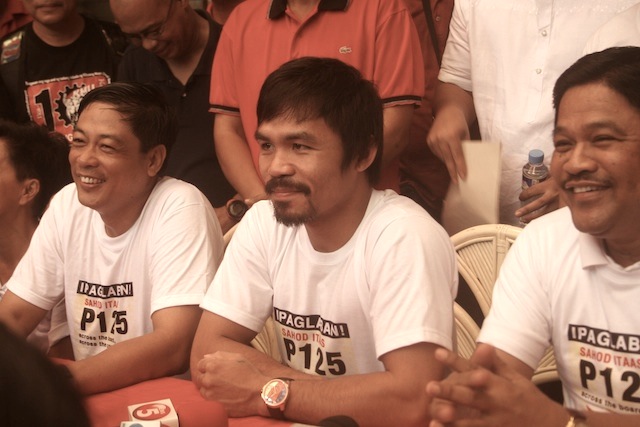 If approved, the wage hike bill will provide significant economic relief for workers and their families, said Anakpawis partylist in a statement. They expect Pacquiao to work with them for the passage of HB 375, particularly in securing support of at least 125 lawmakers before the year ends.

There is strong basis for substantially increasing the wages nationally, said Elmer “Bong” Labog, chairman of KMU. Aside from the fact that it has been reported recently that companies operating in the Philippines have increased their profits by at least 22-percent, he noted that the current wage levels all over the country hardly cover the estimated P1,100 cost of living needed by a family of five to live decently.

On top of that, Labog pointed to the horrible trend even in most profitable companies of giving lower than minimum wages. “The minimum is no longer considered as minimum or the lowest wage level you can receive,” said Labog. He explained that companies do this by resorting to contractualization, a mode of employment where workers who should have been “regular” and receiving minimum or above minimum wages are instead treated as always temporary, revolving workers.

Mariano said it is also high time to abolish the regional tripartite wages and productivity boards for its” callous and inconsiderate” determination of wage hikes for Filipino workers. He said “Wage boards were created to undermine the workers’ just fight for a national minimum wage and serve only in securing the profit margins of employers and capitalists.”