“The fight for our right to free speech does not end with the release of the Calamba 7. These brave and selfless activists should never have been arrested and detained in the first place if the Aquino administration truly values the freedom of expression fought and died for by Filipino martyrs four decades ago.” – Kabataan Party-list

CALAMBA, LAGUNA – Michael Jayson Mozo received a most confounding gift for his 19th birthday: a comforting but uncertain freedom. Along with six other members of the so-called “Calamba 7”, he stepped out of the Calamba City police station at around 6:45 p.m. yesterday under an overcast sky to receive warm congratulations from supporters who were holding a vigil there since Sunday.

After a solidarity program held AT the Calamba City Hall, the seven activists, together with around 150 supporters from worker, peasant, student, women and urban poor sectors, marched from the city hall to Halang, Calamba City despite heavy rains to celebrate their release. 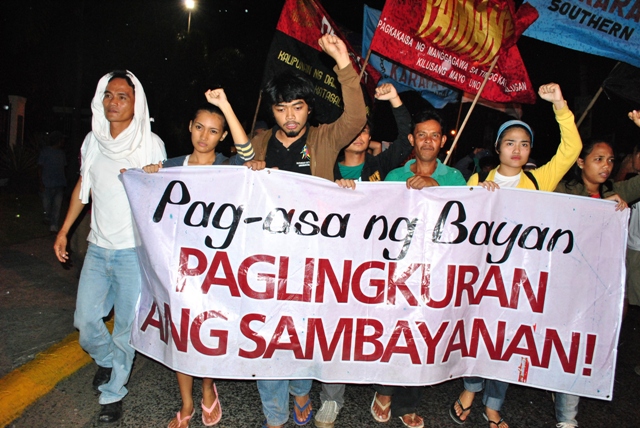 Released after 58 hours of detention, members of the Calamba 7 leads supporters in a march towards Halang, Calamba City for a propaganda action. (Photo by Jonelle Marin / Bulatlat.com)

The protestors criticized the administration of President Aquino, whose speech lauded Rizal’s commitment in correcting social injustices, for “neglecting the welfare of the youth and blatantly disregarding the education sector.”

“Nobody should be detained or put behind bars for decrying the crimes of this administration against the Filipino people. What we did isn’t wrong or disrespectful. We merely gave voice to the 7.93 million youth that cannot afford to go to school this year because of chronic poverty aggravated by the government’s anti-poor social and economic policies,” Mozo said.

The Calamba 7, who were detained for 58 hours, were freed after posting a reduced bail amounting to P12,000 ($278) for all of them. Although released for the meantime, the members of Calamba 7 may face six months to three years of prison time if convicted of charges of tumult and other public disorders under Art. 153 of the Revised Penal Code of the Philippines.

“Justice will not be served to the Calamba 7 until the court dismisses the trumped up charges filed against them,” John Paolo Bautista, Kabataan Partylist-Southern Tagalog coordinator, said.

Bautista said the militant youth group will be lobbying for an inquiry into the alleged illegal arrest and detention of the Calamba 7, and will elevate the campaign for the dismissal of the case to the national level.

“The fight for our right to free speech does not end with the release of the Calamba 7. These brave and selfless activists should never have been arrested and detained in the first place if the Aquino administration truly values the freedom of expression fought and died for by Filipino martyrs four decades ago,” he added.

Immediately after their arrest, the Calamba 7 were inundated with material and moral support from various groups and individuals.

Several individuals, student organizations and alliances in UP Los Baños, as well as progressive sectoral groups in the Southern Tagalog region have gathered food and cash donations for the detainees and have issued statements condemning the arrest and detention of the militants.

As of press time, twenty-six organizations, alliances and individuals have signed a manifesto of unity calling for the immediate dropping of charges against the Calamba 7.

Kabataan Partylist-Southern Tagalog spokesperson Julienne Urrea said, “The overwhelming support expressed by individuals and groups for the Calamba 7 proves that their calls reflect the objective condition of the people. The Facebook fanpage created for the Calamba 7, for example, has reached more than 870 likes. From there, we can transform this virtual support into warm bodies that will work for the advancement of our legitimate and democratic rights.”

She added that the arrest of the Calamba 7 has only stoked the fire of people’s discontent with the Aquino administration.

“Aquino is set to deliver his state of the nation address next month. Now is the perfect time to express our condemnation of what they did to our fellow Iskolar. State fascism is not new to us but some of us tend to accept it as a norm. It is high time that we force this administration to listen to our calls,” she said.