“Instead of making polluters pay, the national government pays polluters. Aquino condoned billions of pesos in terms of tax liabilities and obligations of foreign and private operators of coal plants.” – Kalikasan

President Benigno Aquino III seems to be a big fan of coal-fired plants, and this yet another issue that has had environmental activists burning.

Last June 26, the president led the inauguration of a 100-megawatt coal-fired power plant in Cebu province. He was accompanied by Energy secretary Jose Almendras, Cebu governor Gwendolyn Garcia and officials of the Korean Electric Power Corp. (KEPCO) which owns the facility. Located in Colon village, Kepco and the local government said that the plant will provide 11.24 percent of the Visayas grid’s power requirements.

Previously on April 1, 2011, the president unveiled another coal plant in Iloilo City, which is owned by Panay Energy Development Corporation (PEDC) a unit of Global Business Power Corp. of the Metrobank group of companies.

“The Aquino administration is 100 percent promoting and supporting dirty and pollutive coal power plants as a source of energy in the country,” said Clemente Bautista, national coordinator of Kalikasan People’s Network for the Environment. “Malacanang’s support for coal plants is detrimental both to the environment and the populace. Numerous studies have shown that coal power plants release toxic gases and heavy metals like sulfur dioxide and mercury. This has been proven to cause illnesses and diseases to the immediate communities surrounding the power plant.”

According to reports, the opening of the Cebu coal plant was met with strong opposition from Cebu residents and environmental groups. The Central Visayas Fisherfolk Development Center, Inc. (FIDEC) and the Network Opposed to Coal Fired Power Plant (NO to Coal Power) led the protests saying that the power plant does not only pollute the environment but also poses great risk to the health of Cebu’s population. 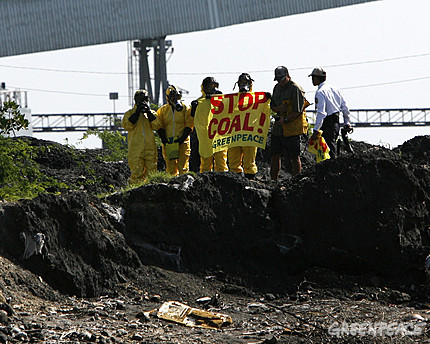 Environmental groups claim that the Aquino administration is not only being very lenient towards the environmental violations of coal power plants, it’s also giving them multi-million tax holidays. Instead of making polluters pay, they said that the national government pays polluters. (Photo courtesy of Greenpeace / bulatlat.com)

Bautista said that the Aquino administration is being very lenient not only on the environmental violations of the coal power plant owners, but also to their financial obligations.

“Instead of making polluters pay, the national government pays polluters. Aquino condoned billions of pesos in terms of tax liabilities and obligations of foreign and private operators of coal plants,” he said.

On March 2011, the Aquino administration condoned part of the P6 billion ($139.5 million) debt in realty property taxes, interests and penalties of Pagbilao Coal Plant, owned by Japanese Company TeaM Energy Corporation. It also paid a reduced amount of P678.7 million ($ 15.7 million) of which only 41 percent was paid to the Quezon provincial government. The rest went to TeaM Energy which advanced only P400 million (US$9.3 million).

In October last year, it was reported that Petron Corp.’s planned P11 billion ($255 million) power plant in Limay, Bataan bagged tax perks from the Board of Investments (BoI). The petroleum firm will be spending P10.84 billion ($252 million) to construct the 70-megawatt power plant which will supply electricity to its oil refinery, also in Bataan, by July 2012.

Under the 2010 Investment Priorities Plan, energy infrastructure projects are considered eligible for incentives such as income tax holidays and the duty-free importation of equipment. Energy covers the exploration, development, and/or utilization of indigenous energy sources and clean coal technology.

“The Aquino administration’s support to coal power plant operators is a triple whammy against Filipinos. While foreign and local operators pollute our environment and endanger our health, the government rewards them with high profits and tax-free operations,” Bautista decried.

In the meantime, the climate activist network Philippine Climate Watch Alliance (PCWA) said in a statement that coal is the dirtiest source of energy and coal power plants are major sources of global carbon emissions.

Currently, the Philippines ranks 7th on the world’s list of countries most vulnerable to climate change. The energy industry accounts for the majority of carbon emissions in the country.

To date, there are around 11 proposed coal plants to be built in various parts of the country: in Isabela, Batangas, Manila, Quezon, Zambales, Davao del Sur, Saranggani and South Cotabato provinces. These coal plants, including the ones owned by PEDC, Kepco and Aboitiz claim to be environment friendly because they will or are using clean coal technology.

“Clean coal technology is a sham and a major greenwashing project by big coal companies. On top of that, this technology is also energy-inefficient and very costly; which coal power plant operators will just pass on to the consumers who bear the high costs of energy. We do not need more coal plants. The government should focus more into tapping indigenous renewable energy,” the PCWA statement said.

According to a research by Advocates of Science and Technology for the People or AGHAM, Circulation Fluidized Bed Combustion (CFBC) technology, the clean coal technology currently used by coal power plants, only reduces gas emissions like sulfur dioxide and nitrogen oxide but does not eliminate carbon dioxide from its emissions, the major cause of global warming.

In the meantime, international environmentalist group Greenpeace also slammed the Aquino government for its supposed lack of leadership on the matter of renewable energy. It said that instead of going green, Aquino was going gray.

According to Greenpeace, coal burning for power generation is a huge contributor to climate change,and the effects in the Philippines of climate change worsen daily. The group said that the government was relying on “short-sighted, reactive measures.”

“President Aquino should focus on long-term solutions that benefit everyone by delivering energy security and energy access for all. Instead of continuously promoting coal, Aquino must make sure the massive uptake of renewable energy is realized in the Philippines,” said Amalie Obusan, Climate and Energy Campaigner.

Earlier this month, Aquino attended the energy department’s launch of its National Renewable Energy Program in Manila, but the government has yet to set a realistic target of utilizing 50 percent more renewable energy by the year 2020.

The IPCC is the leading international body for the assessment of climate change. It was established by the United Nations Environment Programme (UNEP) and the World Meteorological Organization (WMO) to provide the world with a clear scientific view on the current state of knowledge in climate change and its potential environmental and socio-economic impacts

Similarly, the Silent Energy [R]evolution analysis previously released by Greenpeace shows that since the late 1990s, wind and solar installations grew faster than any other power plant technology across the world – particularly coal. In the meantime, the group’s paper “Philippine Energy [R]evolution Roadmap to 2020” forecasts how renewable energy can power more than 50 percent of the country’s energy needs by as early as 2020. It provided an outline on how, with intelligent planning, the current administration can steer the country towards development powered by sustainable energy.

“If President Aquino continues to consider coal as part of the energy mix of the country, then the legacy he leaves the Filipinos is another 30 years of pollution and carbon dioxide emissions – not to mention the extra costs to deal with the health impacts. Greenpeace calls on the Philippine government to scrap all new proposals for coal-fired and nuclear power plants and shift those investments to the development of the renewable energy sector and energy efficiency measures,” said Obusan.