The last time I puked, literally, during a movie was while watching the 2002 French arthouse Irreversible where Monica Belluci’s character, Alex, was being raped brutally in an underpass until she died.

And then, I finally watched Brillante Mendoza’s controversial Cannes Film festival-winning 2009 crime drama Kinatay (Butchered).
I did not only puke literally.

It was worse. All throughout the movie, I felt like I was being brutally victimized by everything that’s going on in the movie and that is not entirely a negative thing. The ugliness and the rawness of Manila is captured just right complementing the unpleasant things unfolding before the audiences’ very eyes.

Unlike in his other films, Mendoza’s “unpleasant” visuals are fitted very well here in Kinatay. In fact, I now totally agree with the Manunuri ng Pelikulang Pilipino that it is one of the ten best films of the decade.

The thing is, I have a love-hate relationship with Mendoza’s works. Some of my least favorite films, Serbis, Lola and Masahista are directed by Mendoza. On the other hand, one of my most loved films of all time, Kaleldo, is also his. Kinatay is another story.

Before I watched Kinatay, I have already heard and read so much about it. Some negative. Some positive. 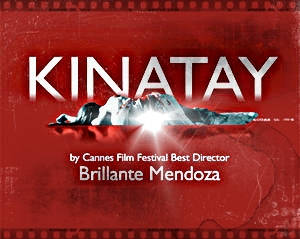 Kinatay, I dare say, is a brave movie. It is brave in the sense that it does not sugarcoat or metaphors its bad guys, who are officers of the police, government authorities. Nor does it offer grey areas for arguments or confusions. This is about police brutality. This is about policemen in a syndicate killing an aging prostitute because of money. This is about how the authorities can do anything to anyone who irks them.

Moreover, Mendoza here tries to get his audience more involved in the movie than just being viewers by imploring unconventional cinematography and putting in the center Peping, (played by Coco Martin) a rather simple, almost idealist criminology student who becomes the eye, the mind and the heart of the story.

Peping dreams of being a police officer but suddenly gets himself caught in a web of illegal activities by the men who offered him a huge amount of money to marry his girlfriend and mother of his son. The men are the same police officers responsible for the crime he witnesses. But his being a witness will be cut short. He has to decide. Will he take part in the butchering? Will he do something about it?

It is easy to sympathize with Peping. Martin portrays a good “innocent” Peping. As for me though, I wanted him to do something more active.

In the end, Mendoza succeeds when he clearly decided to do the more sensible, the more possible, the more logical for Peping and that was when I questioned the most: no longer the movie, but, yes, hard core as it sounds, the society.

Kinatay is not at all without flaws though.

I think, the establishing scenes and subplots are rather long, that it could have done away with some of these- such as the tricycle and jeepney rides, the injection of too many characters that eventually became insignificant to the whole film.

Mendoza could have started somewhere in the middle, where the danger started to be felt.

Then again, that’s Mendoza’s signature. The long establishing shots that are more often than not, boring. But that’s just me.
On the other hand, the acting department is not completely flawless. Well of course, Martin, Ma. Isabel Lopez and Julio Diaz deliver. Martin is credible and he proves it here that yes, he is one of his generation’s better performers. Diaz, a true veteran thespian shows subdued acting most of the time. Lopez could still have given more though, one would feel it.

The other actors in the movie overacted, underacted or simply just didn’t do their homework. Mercedes Cabral for instance, just doesn’t have enough passion, timing or effort to play effectively Martin’s wife. Allan Paule too, was obviously just playing around.

But why is Kinatay worth watching?

First and foremost, as an audience, we should be watching films that tackle social realities or current events. Whether they turn out to be bad movies or praise-worthy flicks, it is a way of telling the filmmakers that we are indeed an intelligent audience. We are no longer just watching movies to laugh and escape our own realities.

Moreover, many local films tackling social realities and current events are being shown internationally. Meaning- whether we like it or not, we are in these movies.

In the case of Kinatay, it made waves in the international cinema scene. Not only did it win Mendoza the best director trophy in Cannes festival but it placed Philippine cinema in the center of film debates globally.

It is a significant film to watch, albeit two years later, because it mirrors a part of our everyday life and it reiterates that some realities-police brutality, extra judicial killings– though unimaginably evil and revolting to the stomach are becoming regular news of the day.