Leonardo “Ka Ben” Perez, a labor leader up to the end

MANILA – Lung cancer took away one of the labor leaders of progressive Kilusang Mayo Uno (KMU) Leonardo Perez, 59. Better known as “Ka Ben” in the progressive labor movement, he had clung to hopes of surviving his illness until the very last week of his life, texting other survivors of life-threatening illnesses in KMU that yes, he was okay: “I can bear this.” He battled cancer for eight months, happily reporting small recoveries and promising that he would be up and about in no time and would be again going to street protests and to overnight meetings with unionists. But in the end, he was forced to succumb to the illness that, in the same week, also claimed the life of a former president’s daughter. 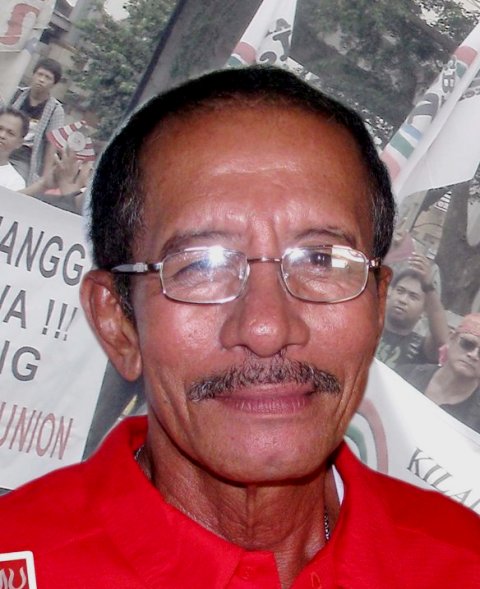 Ben Perez was president of the Alliance of Nationalist and Genuine Labor Organizations or ANGLO, national council member of the KMU and vice-chairperson of Anakpawis Partylist-Marikina when he died last week.

Workers affiliated with ANGLO remember him most as a brave and “expert adviser” in union struggles, a cheerful comrade and mentor, an indefatigable humorist, a prayerful, musical man who played “make-believe instruments” to accompany his fellow labor leaders’ singing.

“He offers ample solutions to our problems,” said Francis Surmion, a unionist from Universal Robina Corporation.

In 2007, unions in farms affiliated with ANGLO-KMU suffered militarization under Oplan Bantay-Laya. These farms in Rizal and in Bulacan that include Foremost Farms, Console Farms, and at least two Universal Robina Corporation farms, were used as detachments by the military, the KMU reported to the high-level mission of the International Labor Organization in 2009. They complained that it began with the management and soldiers summoning the unionists to a “dialogue”, where they pressured the unionists to disaffiliate with the KMU. The soldiers then reportedly went on frequent house-to-house visits to known active unionists, allegedly harassing and threatening them if they persisted in actively joining the campaigns of KMU.

In those times of ‘very strict monitoring” of the unionists’ activities, “Ka Ben was the only KMU leader who managed to pass through the military’s various checkpoints to reach their affiliated unions,” said Doods Gerodias, chairman of ADLO, another member federation of KMU.

“Ka Ben bolstered our morale and courage,” Surmion from Robina Farms said, adding that they managed to face the soldiers’ “dialogue” and subsequent red-baiting harassment with Ka Ben on their side.

His fellow unionists remembered him also for his “strength” after he managed to help rescue his neighbors during the destructive typhoon Ondoy.

As the acclaimed resident comic of KMU’s National Council, unionists said they will miss Ka Ben not only for his patient and incorruptible positions in workers issues including in collective bargaining negotiations, but also his habit of providing comic relief even amid serious talks and meetings.

“Keeping one’s cool through humor, that’s what I learned from him,” said Henry Cervantez, union vice-president of workers in Manila Bay spinning mills in Marikina. He said Ka Ben can dispelled tensed and furious discussions in collective bargaining negotiations simply by cracking jokes.

Leonardo ‘Ka Ben’ Perez came from a poor peasant family in Nasugbu, Batangas. Unable to finish even grade school, he had to take on various jobs since his youth so he could help feed his family, said the KMU in a statement. 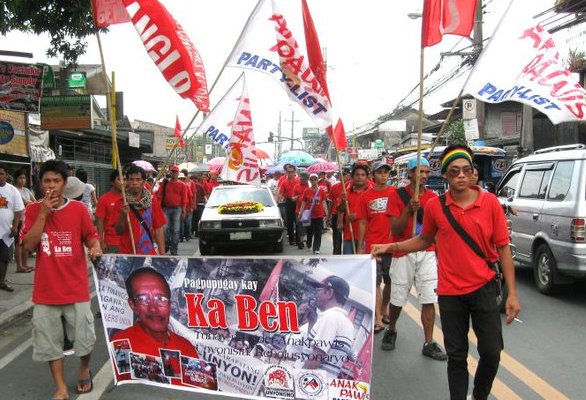 Ben Perez had dreamed of becoming a lawyer. He became far more than that, his fellow unionists said. They cited Ka Ben’s understanding of Philippine labor laws and “genuine trade unionism” which helped them organize themselves and wage struggles against the exploitative measures being implemented by the management and the government.

Most workers who had a chance to work with Ka Ben remembered his being prayerful. But one woman labor leader, Gloria Bongon, president of Bleustar workers union, added that in their case, Ka Ben once commented that “prayers won’t help in your kind of capitalist.”

Bleustar makes the Advan-brand and other “generic” shoes being sold in large mall chains. Its workers have complained of lower than minimum wages, sexual harassment and repeated violations of collective bargaining agreements.

Ben Perez’s journey toward becoming a progressive labor leader began in his early 30s, when as a bus driver and active unionist at JD Transit Incorporated, he led in fighting and subsequently ousting the management union, said the KMU.

Until today, younger labor leaders said they can’t forget Ka Ben’s story about how he would go to work leaving his family with no money for food. “He would bring his kid’s pet pigeon. After he had earned some in a few hours of plying the Baclaran-Monumento route, he would tie money to the pigeon’s leg and bid it to bring it home to his family so they could buy food.”

Perez was married to Lucy. They had four children.

Perez was elected treasurer of the Bus Industry Alliance or Busina in the late ’80s. They “led successful strikes against bus companies until the early ’90s. He led Busina’s active involvement in big protest actions of the time,” the KMU said.

Later Ka Ben shifted into driving a jeepney plying the UP-Katipunan route. The KMU said he led the formation of the jeepney drivers’ association there and became its president. One time, he and his co-drivers had tied an abusive police officer to a lamp post for exacting kotong (illegal dues) from them, said the KMU.

From there, Ka Ben worked in a furniture company in Marikina City, where he again organized a union to advance the workers’ rights and welfare.

The KMU hailed Perez for actively participating in ousting corrupted federation leaders of ANGLO in early 2000s. At the time, ANGLO was beset by a leadership who, after an investigation by the members and the KMU leadership, had reportedly been found out to be betraying the workers’ campaigns in exchange for huge sums from capitalists.

For Perez’s role in helping steer ANGLO toward genuine unionism, he was elected as officer of ANGLO in early 2000s. When its president, Wilson Baldonaza, died in 2009, Ka Ben took on the federation’s leadership, cracking jokes about its presidents dying untimely on the post. “That’s where we’re all headed, anyway,” was what his colleagues fondly remembered him to have said in jest at the time, as he seemed to brace himself for the task.