Ka Wilson was a dropout from a poor family in Tarlac. But that did not stop him from becoming one of the most intelligent and passionate leaders of the progressive labor movement in the Philippines. Not even his sickness, to which he succumbed this week at the age of 55, prevented him from pursuing the Filipino workers’ struggle that he waged all his life.

MANILA – One time, over food and drinks during the first of victory parties the progressive labor movement held after winning in the party-list election, Wilson Baldonaza shared a personal story. “I vividly remember,” he began, “back in the days when the peso-dollar exchange rate was…”

To this day, his friends could not recall anymore what the personal story was all about, but it became their standing joke about Ka Wilson — that he could remember clearly the economic and political context of whatever period he was discussing.

In fact, as a diligent educator, his evidently vivid contextualizing in his head could sometimes leave Ka Wilson silent in mid-sentence as he pored over facts in his head and tried to pick out the most relevant for the topic at hand. Again, for his friends and colleagues, this had also become a standing joke with him. At times, they would rib Ka Wilson when he seemed about to enter another such brief trance. 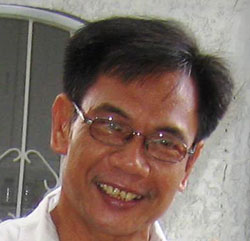 Ka Wilson was a serious and deeply thoughtful person, his wife Lily said. In fact, a long “uhmmm” had been his usual overture in entering even already heated discussions. But his seriousness did not mean he was not a mean joker. He was just not the usual comic in the progressive labor movement – he did not make fun of other people, but he sure made fun of himself a lot. He was a comic’s dependable foil, say fellow former educators from Ecumenical Institute for Labor Education and Research (EILER) and the Kilusang Mayo Uno (KMU or May First Movement), where Ka Wilson was secretary-general.

A labor leader with a passion for reading and research, Ka Wilson would not only research facts about a speaker he was tasked to introduce in a rally or forum  — he would also research on the topics he or she was about to discuss. After his meaty introduction, the speaker could only ruefully comment that Ka Wilson could have handled the topic better.

All these will be sorely missed now.

Ka Wilson Baldonaza, a great labor educator and labor leader, died last Tuesday at 55. He would have turned 56 next month. He was survived by his wife, Lily, five siblings, relatives and friends and comrades from the progressive labor movement where he devoted most of his life.

Though Ka Wilson’s death had not come as a surprise to his family or comrades – he had been in a coma for over a week since he suffered a stroke last month — friends and comrades were saying he was still too young to die. Just a few years before, his pictures showed a young and healthy-looking man laughing at the camera. In the past few years though, he lost weight after he was diagnosed with hypertension and told to start taking a daily maintenance cocktail of medication.

“Here are some of my drug contraband,” he jokingly told us once after unrolling mats of huge pills. He hated that he had to spend so much on medicines.

From Victoria to Manila

Wilson Baldonaza hailed from a poor farming family in Victoria, Tarlac. The second in five siblings, he attended elementary and high school in that town while helping his parents plant and harvest palay (rice) and sugar cane. After graduating from high school, he tried his luck in Manila in hopes that he could support himself through college by working.

He worked at Mabuhay Textile (Matex) and enrolled in a civil-engineering course at the University of the East. But soon lack of money hindered him. He was forced to forgo his college ambitions as he found it very difficult to work full time, even put in some overtime in Matex, and still study. Besides, Ka Wilson had begun being active in organizing unions, first in Matex, later in neighboring factories in Valenzuela, Metro Manila.