MANILA – Four women from different parts of the world were recognized as “Women of Valor” during the first general assembly of the International Women’s Alliance (IWA) held in Manila early this month.

The four women were honored for their “decades-long service to the people and for their indispensable contribution to the struggle for women’s liberation and in moving forward the people’s struggles for national and social liberation, sovereignty and self-determination.”

One of them has been working against racism and discrimination against migrant workers. Another is waging a battle against occupation of Palestine by US-Zionist regime. Two others, who came from the marginalized sectors, are leaders of mass movements in Argentina and the Philippines.

A veteran of the international women and peace movement from Geneva, Edith Ballantyne worked against racism and colonialism in Africa. She also worked against discrimination against migrant workers in Europe, and for peace in Palestine and other countries in the Middle East. 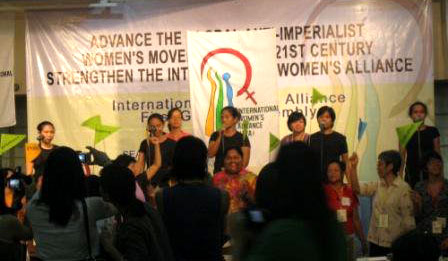 Ballantyne was awarded the Gandhi Peace Award in 1995 for her “contributions made in the promotion of international peace and good will.” Gandhi Peace Award is an annual award named after Mahatma Gandhi and bestowed by the organization Promoting Enduring Peace.

Ballantyne also served as the secretary general of the Women’s International League for Peace and Freedom (WILPF) for 23 years and as its president for six years. She actively worked for the empowerment of women and the advancement of their rights. Ballantyne continues her activities in WILPF as its representative to the United Nations in Geneva, Switzerland.

Recognized as the “poster girl of Palestinian militancy,” Leila Khaled brought the Palestinian struggle for self-determination to international attention when she and her team took over a plane in 1969 and 1970.

In an article, Khaled said that the aim of the hijackings was to gain international recognition of the plight of Palestinians as an issue of national dislocation and desire for self-determination rather than a refugee problem to be resolved through charity.

At the age of four, Khaled and her family were forced to leave Haifa in Palestine and went to Lebanon in 1948 as refugees. There, she joined a Lebanese cell of the Arab Nationalist Movement (ANM) in 1958. Later, she taught in Kuwait and became active with al-Fatha or the Palestinian National Liberation Movement.

Because of her active participation in the national liberation struggle, Khaled’s life was put at risk. She survived several assassination attempts.

In 1967, Khaled also became the first female member of the Popular Front for the Liberation of Palestine (PFLP) and remains a member in the PFLP Leadership Council. She also serves as a member of PFLP-affiliated Palestinian Popular Women’s Committees.

Khaled is a high-ranking leader of the General Union of Palestine Women and a delegate to the Palestinian National Council (Palestinian Parliament), where she has introduced a platform focusing on the recognition and protection of the human rights of women.

Khaled is now 58 and still continues to conduct and join international actions for the liberation of Palestine.

Khaled also did not make it to the general assembly because her husband suddenly got sick. The award was accepted by Connie Ledesma in Khaled’s behalf.

Icon of women’s struggle in Argentina

Iscaro belongs to a working class family. In 1943, she was forced to work in a textile factory at the age of 15. Her father and brothers were workers in the construction industry. Through her family who embraced the cause of the Russian Revolution, she became enlightened to the ideas of communism. Being communists, her family suffered from police raids, imprisonment and torture when she was growing up.

Iscaro worked underground during the time of military dictatorship in Argentina when she was appointed to lead the work among the women after the Revolutionary Communist Party of Argentina was founded.

Iscaro organized women in impoverished communities. She worked for the protection of the rights and ensuring the welfare of working mothers under the Childhood Movement during the first two terms of Juan Peron’s presidency.

Iscaro continued to play a very significant role in the women’s struggle for rights, justice and freedom even after the dictatorship was defeated. She had been very active in the National Encounters of Women, a forum for women’s issues and struggles in Argentina since its foundation in 1986. From 1,000 members more than two decades ago, the National Encounters of Women is now being attended by around 25,000 women.

Iscaro’s dedication has inspired generations of Argentinian revolutionaries to continue fighting for social and national liberation.

“I am very grateful for this award but this award is not only for me, it’s for all of us women who have been also working for the struggle. We all aim to topple imperialism and capitalism, so this award is for everyone,” Iscaro said in her acceptance speech.

The Philippine movement’s very own, Carmen “Nanay Mameng” Deunida was also honored as a woman of valor.

Deunida started her involvement in the people’s movement at the age of 50 as a member of the Kabataan para sa Demokrasya at Nasyunalismo (Kadena) during the dictatorship of former president Ferdinand Marcos. Being an urban poor herself, she became the founding member of Samahan ng mga Maralitang Kababaihang Nagkakaisa (Samakana) in 1983 which she headed for 11 years. She is also the first chairwoman of the urban poor organization Kalipunan ng Damayang Mahihirap (Kadamay) in 1998 and now its chairwoman emeritus, and vice president of Anakpawis party-list.

“Despite her old age and frail body, Nanay Mameng never fails to be a voice of the toiling Filipino women and men. Her courage and strength in fighting for people’s rights and against exploitation and oppression have inspired generations of progressive activists in the country,” the citation read.

Asked by Bulatlat.com what keeps her going despite her old age, “I have a grandfather who fought for the people as a katipunero (revolutionary) during the Spanish era,” Deunida said in an interview with Bulatlat.com.

It was not only her katipunero grandfather who became her inspiration but the poverty that she is experiencing as well. “I saw and experienced dire poverty, and I realized that I need to get involved in the people’s movement.”

“I will not to give up the struggle as long as I am alive, not until the day comes when I am already in a coffin. For as long I live, I am here with you comrades, we will fight for our freedom,” said the 83-year-old activist.

Members of the audience wiped their tears as the old but courageous woman, a veteran of Edsa People Power 1 and 2, walked to the stage to receive her recognition.