“Before president Chavez moved to nationalize Pvsa and the whole of the oil industry, TNCs including those in the other industries were able to stay and make a profit for 100 years. We could only do business with the US and supply it with oil and we were at the losing end. Foreign oil companies damaged Venezuela’s national interests and that reclaiming them represented a historic victory for the people,” he said.

It was in 2009 when the Chavez government started the process to nationalize 60 oil service contractors and place them under the control of Pvsa. Oil giants Exxon Mobil and Conoco Phillips were forced to quit the nation and sue for compensation, but lost in the legal battle.

“These are our resources, we should be the ones to benefit from them. The Venezuelan people are the ones who will determine how these resources will be used and how much they will cost. The policy of nationalization has also been implemented in 125 sectors of the economy. The industries of telecommunications, electricity, water, gas, transportation, cement, sugar, salt — all of these have been nationalized and are now being run by workers’ collectives all over the country,” he said.

Adarfio said that among the most urgent concerns the Venezuelan government needs to address is food production. He said that as of 2010, Polar, a major private food distribution company controls most of the food market and that there is a serious conflict between the government and the management of the company.

“But we are introducing systems like Mercal or the state-run food stores and there are some 30,000 Mercal supermarkets across the country. These provide basics for people so they don’t depend on private networks.Nationalization of the food industry is important if you want to ensure food sovereignty,” he said.
Cargil, a Canadian-based seedling company was nationalized a couple of years ago. Along with Monsanto, they control seed and transgenic products internationally.These companies, Adarfio said, tried to foment social unrest by withholding supplies of the food products they also distributed like rice, and corn flour. The Chavez government used the law on sovereignty and food security — which is a constitutional law ensuring Venezuelans get an adequate and safe supply of food — to nationalize the companies,” he said.

Workers control for a just society

Adarfio is also an educator with Venezuela’s Moral y Luces (“Morality and Enlightenment”) program, which aims to raise consciousness and promote public discussion about the new socialist values that underpin the Bolivarian revolution in Venezuela. He writes regularly on issues facing the revolution for Venezuela’s main news website, Aporrea, and in his writings he frequently discusses the Workers Control Collective.

Essentially, the Workers Control Collective is a movement toward empowering workers. Workers collectives and the leadership elected by assemblies lead the administration of important factories and industries.

“Representatives from workers by the hundreds are empowered to submit proposals, including developing workers’ control and participation in management; measures to eradicate corruption and bureaucratism and the elimination of casualization by giving workers regular and permanent jobs. It is alsa important that workers are given ideological and technical education, and taught about socialism, which is infinitely a more humane and compassion economic system that puts the welfare of the people and society way ahead of private gain or profit,” he said. 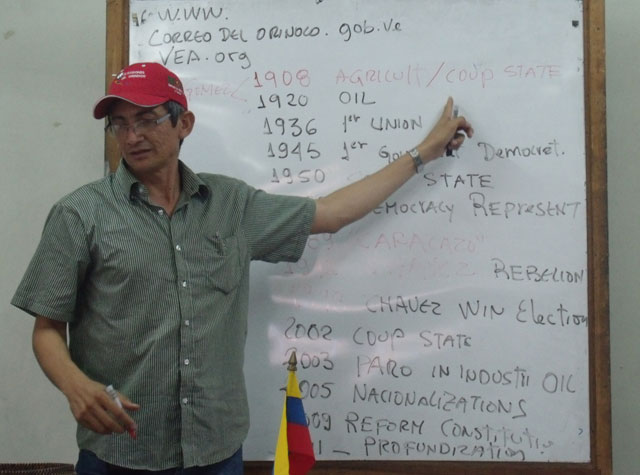 “Doesn’t it make sense that the working people take charge of the industries. and the farmers the agricultural lands? They’re the ones who keep society running, who grow the food that feeds society. Everything in the economy, the schools, even the military should be shaped to meet their needs and provide for their development and improvement. What we want is a society where every member takes responsibility not only for their own individual concerns, but for all aspects of life in society and how it’s run,” said Venezuelan educator and activist Alexis Adarfio.(Photo by Ina Alleco R. Silverio / bulatlat.com)

Adarfio said that during fora and symposia, workers discuss issues like removing the division between “mental” and “manual” labor in the workplaces. They also want to transform trade unions into schools for socialism and organize production in all industries on a national scale.

“Doesn’t it make sense that the working people take charge of the industries. and the farmers the agricultural lands? They’re the ones who keep society running, who grow the food that feeds society. Everything in the economy, the schools, even the military should be shaped to meet their needs and provide for their development and improvement. What we want is a society where every member takes responsibility not only for their own individual concerns, but for all aspects of life in society and how it’s run,” he said.

Then Adarfio gave a concrete example on how to practice socialist consciousness which he said was also about producing things for the good of society. “If workers have socialist consciousness, they will see that there is no need at all to produce products like cigars and cigarettes that cause cancer. Why should we create things that we have no real need for and can only do us harm?”

At the end of his talk, Adarfio expressed a wish that Filipino activists will continue to be in solidarity with the Venezuelan people.

“There is much that we can learn from each other about building a just and humane world. Our enemies are the same, and so are our victories because they are all for the cause of true freedom and a more compassionate way of life,” he said.

ILPS Philippines chapter president Rey Casambre and Agham Scientists for the People chairman Dr. Giovanni Tapang gave Adarfio a copy of ILPS president Jose Ma. Sison’s Philippine Economy and Politics which was co-authored by Julieta de Lima. They also gave the Venezuelan activist and educator a banner of the ILPS.