You Are Here: Home → 2011 → July → 15 → Building socialism through people’s economic participation in Venezuela

It’s not every day that one gets to hear about a society where workers are given the respect they so well deserve as creators of society’s wealth.

Last July 12, the Philippine Chapter of the International League of Peoples’ Struggle (ILPS) sponsored a talk with Venezuelan activist Alexis Adarfio. He was a delegate to the recently concluded 4th International Assembly of the ILPS held July 7 to 9. He works with the Ministry of Popular Economy in Venezuela. An experienced and respected trade unionist, he is also a well-known advocate of state intervention to convert major industries into worker-controlled, socialist industries.

He was an active participant in the drafting of the “Socialist Guyana Plan” to transform Venezuela’s basic industries into less energy-intensive, worker-controlled enterprises directed toward meeting domestic needs rather than for export. 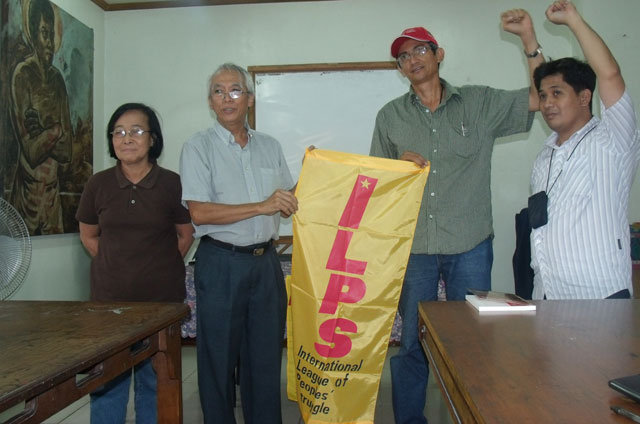 “It was a great honor to have been part of the ILPS’ assembly and I sincerely hope this starts a strong and productive working relationship between the people’s movement in Venezuela and the Filipino people,” he said.

Despite the differences in languages (Adarfio is not fluent in English and the audience comprised of members of various peoples organizations under the Bagong Alyansang Makabayan), Adarfio’s audience found his talk about the struggle of the Venezuelan people against imperialism and for economic and political sovereignty highly inspiring.

He gave a short rundown of the twists and turns in Venezuelan history from the 1800s when Venezuela declared its independence from Spain, through the centuries when it was led by various military leaders and coup de etats erupted; and finally to the present as a country and a people resisting against the attacks of imperialism.

The main focus of Adarfio’s talk was on the social reconstruction Venezuela is currently undergoing under the presidency of Hugo Chavez. According to Adarfio, the country is fighting to build roots in socialism and break away from capitalism, and the experiment is proving to be highly challenging.

“This is a challenge that the Venezuelan people is more than up to the task to meet and overcome,” he said.
According to Adarfio, the Chávez administration is going to allot 45 billion bolivars (US$ 10.5 billion) in government bonds as set out in the Law of Additional Debt. The ruling was passed by the National Assembly the previous June. He said that the money will be mainly used for the the maintenance and development of three of the nation’s main social programs — the state housing mission; projects for national agricultural production; and projects for food sovereignty through mission Agro Venezuela.

“Funds will also be utilized for the establishment of infrastructure projects and the state’s new work mission. The Chavez government is determined to create ‘productive, humanist and socialist’ jobs and provide employment to 3.5 million Venezuelans before 2019,” he said.

Adarfio takes pride in declaring that Venezuela is not reliant on loans from financial organizations such as the International Monetary Fund (IMF).

“We have seen the destruction of the Venezuelan economy and the welfare of the people because of the IMF and its impositions. The IMF and the various transnational corporations (TNCs) have had decades sucking the lifeblood of the Venezuelan people and millions of people — farmers, workers — were hungry, homeless and helpless. We had rich oil resources but because of the trade agreements with the US, we did not benefit from the oil and poverty was widespread. The social revolution that continues to be waged in Venezuela is against poverty and its roots — mainly the inhuman and profit-driven greed of TNCs and agencies like the IMF,” he said.

US imperialism has long stood in the way of assertions of self-determination and democratic rights in Latin American countries. There’s already a very long list detailing the crimes of US imperialism committed against the peoples of Latin America. To name a few, there’s the 1983 invasion of Grenada; the the 1985 invasion of Panama; the Contra war it instigated in Nicaragua, the counter-insurgency war in El Salvador. More recent examples of the US’ continuing attacks included the counter-insurgency war in Columbia where it aids the puppet government; and the continuing threats against the nationalist Chavez government in Venezuela.
Recent reports have it that the Barack Obama administration has laid down sanctions on Venezuela’s state oil company Petróleos de Venezuela (Pdvsa), and the people of Venezuela have called the sanctions an “imperialist attack.”

The U.S. State Department enforced the sanctions in an attempt to put further pressure on Iran to halt its nuclear program by penalizing companies which continue to trade with it. Between December 2010 and March 2011 Venezuela, which has friendly bilateral relations with Iran, exported $50 million worth of a fuel additive to the latter.

The US said that it wanted to send a “clear message” to companies which continue to “irresponsibly support Iran. Iran in the meantime maintains that its nuclear program is purely to supply energy to the public, but the US claims that Iran is developing nuclear weapons.

The Bolivarian Alliance for the Peoples of the Americas (ALBA) said because PDVSA is a Venezuelan state enterprise, not an enterprise of transnational interests, the US sanctions are also in violation of the fundamental principles of international law codified in the Charter of the United Nations and particularly in Article 1 of the International Covenant on Economic, Social, and Cultural Rights.

The Covenant stipulates that “all peoples have the right of self-determination. By virtue of that right they freely determine their political status and freely pursue their economic, social and cultural development,” and that “all peoples may, for their own ends, freely dispose of their natural wealth and resources without prejudice to any obligations arising out of international economic co-operation, based upon the principle of mutual benefit, and international law.”