MANILA – Small but feisty, Lina Solano, an Ecuadorian woman spent most of her life defending mother earth and the people affected by the destruction brought about by plunder of Ecuador’s resources.

Solano was in Manila early this month for the first general assembly of the International Women’s Alliance (IWA).

Solano said her advocacy started when she was still a college student at the university. “I am always inclined to fight for justice, just even before my militant spirit is so alive,” Solano said.

She said she is fighting against mining not only because of its impact on the environment but to the people in the community as well. “The disastrous effects of mining are not only in the environment. It also affects people especially children who suffer from sickness brought about by mining,” Solano told Bulatlat in an interview.

Like the Philippines, Ecuador is rich in biodiversity. In fact, it has the most biodiversity per square kilometer of any nation. According to the Conservation International, Ecuador is one of the 17 megadiverse countries. Ecuador’s land is fertile and its agricultural sector produces bananas, flowers, coffee, cacao, sugar, tropical fruits, palm oils, palm hearts, rice, roses and corn.

Ecuador’s economy is heavily dependent on exporting petroleum, fish, shrimp, timber and gold. Its greatest national export is crude oil. Large scale mining, on the other hand, began in 1991 when the mining law was passed and implemented. Reforms, including eliminating deadlines for applying for concessions and doing away with severance taxes paid by companies, favored the mining companies 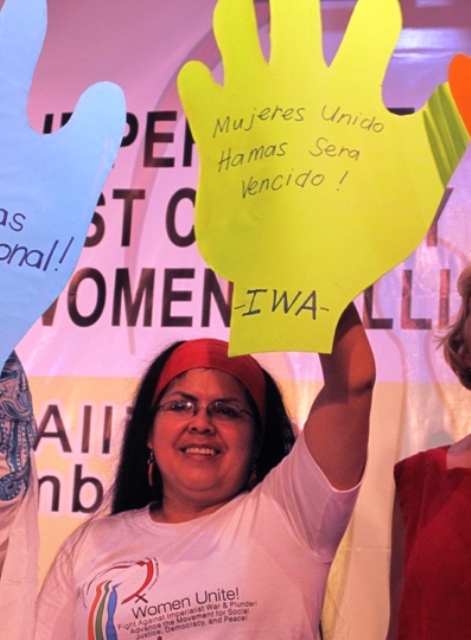 According to the Acción Ecológica, an environmental organization based in Quito, over 4,000 mining concessions have been granted, covering over roughly 20 percent of the surface of Ecuador, including many ecologically and culturally diverse areas.

The mining industry in Ecuador is dominated by Canadian mining companies.

Resistance to large-scale mining is getting stronger. In January 2007, the National Coordinating Committee in Defence of Life and Sovereignty was established. Solano is a member of the committee. The committee brings together communities from more than eight provinces across Ecuador, environmental and human rights organizations, urban associations and student groups that resist large-scale mining.

Solano said part of her work is organizing women in communities and educate people about the destruction brought by mining. “We educate the people, even young children, about the problem. Women have workshops to make them aware of their rights and they become involved with the struggle and denounce the abuses by the government, as well as the foreign mining companies,” said Solano.

In March 2008, Solano became a founding member of Latin American Union of Women (Ulama). She was joined by women leaders from Guatemala, Venezuela, Peru and Bolivia Solano added that to keep women vigilant, they were trained to document human rights violations committed against the women and the people in the community.

For exposing the social and environmental impact of large-scale mining, Solano has been repeatedly harassed and threatened by the President of Ecuador and slapped with fabricated cases by the foreign mining companies.

“I was sued many times but the cases did not prosper,” Solano said in an interview with Bulatlat.

Solano was charged by Corriente ECSA (a Canadian mining company) of leading an armed group which allegedly attacked Rosa de Oro and leading a march during which their offices were broken into.

In June 2008, during a two-day protest to eliminate mining concessions in Ecuador, Solano was among the 30 persons who were detained by the police.

The protesters successfully blocked and shut down three major arteries around Cuenca, the third largest city in the country and thecapital of the province of Azuay, They also blocked other main routes in the Southern Amazonian provinces of Morona Santiago and Zamora Chinchipe, with additional demonstrations taking place in the central province of Chimborazo. The demonstration was dispersed violently, with hundreds of police using tear gas.

Solano and Nidia Soliz were held together in a locked car without windows and driven around the countryside before being taken to the provincial police headquarters. According to a news report, Solano said the officer was driving “at top speed, braking abruptly, presumably so that we would bang ourselves against the inside walls of the car.”

In April 2008, Solano also received three threatening emails telling her that she is being monitored and that “one of these days you will have to pay for all the evil that you do.”

What keeps her going

Solano said the disastrous effects of mining in her country are not only putting them at risk but also the whole planet. She added that the injustices and inhumanity brought about by corporations is just not acceptable. “They are the ones who are getting the fortune and leaving the people poor.”

This understanding, she said, the problem of political domination and problem of imperialist domination over her country, makes her and other women want to to change the situation.

“There has been persecution against us; it created fear among women who are members of the organization. Some of the members had health problems because of persecutory tactics, many mothers were even imprisoned. But these did not stop us from fighting,” Solano told Bulatlat.