What happened to the ‘Hello Garci’ protagonists?

Garci was perceived as the voice of the man being asked to ensure the woman’s vote would be higher by one million at least compared to her closest rival. Seven months after the first probe on Hello Garci began, he reportedly took flight and disappeared, a sign that critics say pointed to his being guilty.

Sen. Cayetano said Garci was still able to get his retirement benefits from the Comelec, amounting to P3.1 million ($72 thousand), plus monthly pensions. Garci, meanwhile, told the media recently that all his properties he and his retired LTO administrator wife have amassed came from their lifetime savings.

“Garci Boys” in the Comelec

Senator Allan Peter Cayetano declared in a speech before the Senate that “Garci’s Boys” remain up to this day in the Comelec. He named six but did not discuss how the other five have been complicit in past poll frauds. He singled out Ray Sumalipao as “a protege of former Comelec Commissioner Virgilio “Garci” Garcillano.”

Sumalipao was also supposedly among the Comelec officials who had dinner with Arroyo in her house at La Vista subdivision in Quezon City in January 2004, three months before the elections. The group allegedly received huge sums during the affair. Sumalipao has denied the allegations. 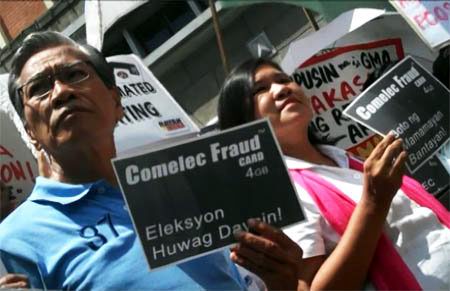 In April 2010, Sumalipao was reshuffled to serve as Comelec regional election director (RED) in Davao, after having been ARMM regional director. The Comelec would have made him handle the preparations for the ARMM elections this year if these had not been postponed.

Comelec Chief Brillantes has yet to explain why the six Comelec officials are still with the office. (And why he had chosen Sumalipao to handle the preparations for ARMM polls, before it was postponed to 2013.)

Unfortunately, affidavits and other documents related to the Hello Garci investigation had been reportedly lost in a fire. Comelec spokesperson James Jimenez said they are still reconstructing the documents “although admittedly it would be difficult.” Anyway, he told reporters last month that based on those affidavits, “there was no reason to continue investigation.”

Perceived as ‘guilty’ in the military and police

Because of the wiretapping involved and the exchange of taped conversations for millions of pesos, the Hello Garci controversy has also put pressure on the military, how they do surveillance, and what their operatives do with the “intelligence materials” they gathered.

There were intelligence operatives asked during the earlier probes on Hello Garci, such as T/Sgt Vidal Doble, who reportedly earned P2 million ($46 thousand) from those tapes. But due to inconsistencies in his testimony, legislators later considered him as a “polluted source.” No more reports came out since then about how the military conducts their surveillance and handles the materials they gathered.

But the bigger fish among the armed forces and the police implicated and mentioned in the Hello Garci tape were then AFP deputy chief of staff for operations Maj. Gen. Hermogenes Esperon Jr.; Southern Command chief Lt. Gen. Roy Kyamko, and then Army 1st Infantry Division chief Maj. Gen. Gabriel Habacon. They were all reportedly cleared in the Mayuga probe.

Hermogenes Esperon – started out under Arroyo as commander of her Presidential Security Group in 2002, keeping anti-Arroyo protesters at bay in this capacity. In Jan 2004, she appointed him as commander of Task Force Hope (Honest, Orderly, Peaceful elections) for peace and order – and it was in this capacity that he was ironically implicated in Hello Garci scandal.

He became AFP chief of staff in 2006, a promotion that progressive groups said was his prize for helping Arroyo cheat and get away with it. Upon retiring, he was designated as peace adviser to the Arroyo government. He ran for congressman of the 6th district of Pangasinan during the 2010 elections but lost, amid charges that he conducted massive vote-buying.

Hermogenes Ebdane – He was PNP chief and in 2007 a defense secretary under Arroyo. Whistleblowers from the ranks of the Special Action Force (SAF) are now detailing before the combined Comelec-DOJ “Hello garci” probe how Ebdane has ordered the SAF to provide security for the switch/cover-up operations at the Batasan while the result of the 2004 elections was being contested.

Today, as a Zambales governor, Ebdane is also reportedly sending thugs or officials loyal to him to intimidate the former members of SAF who are now revealing what they knew of the coverup at the Batasan.

To close or not to close

The newly restarted probe of Hello Garci came a month after Comelec chief Sixto Brillantes said that the Hello Garci probe is not a priority. As they began the probe, Esperon told the media he had been previously cleared but he would welcome the probe and say the same things he said before. Abalos said something similar.

Based on earlier Comelec official statements, its election officials implicated in Hello Garci have either not been investigated, or were cleared or not charged.

Since Arroyo has finished her contested term, legal experts are now saying it cannot be undone anymore. The quest now is for the purpose of closure and finally charging those guilty of electoral fraud.

But this early, there are legal misgivings – the result may be defeated by a technicality in the end, for example by lapsed prescription period for filing cases. Besides, critics said, the Justice Secretary’s past recommendations from other probes have all been ignored by President Aquino.