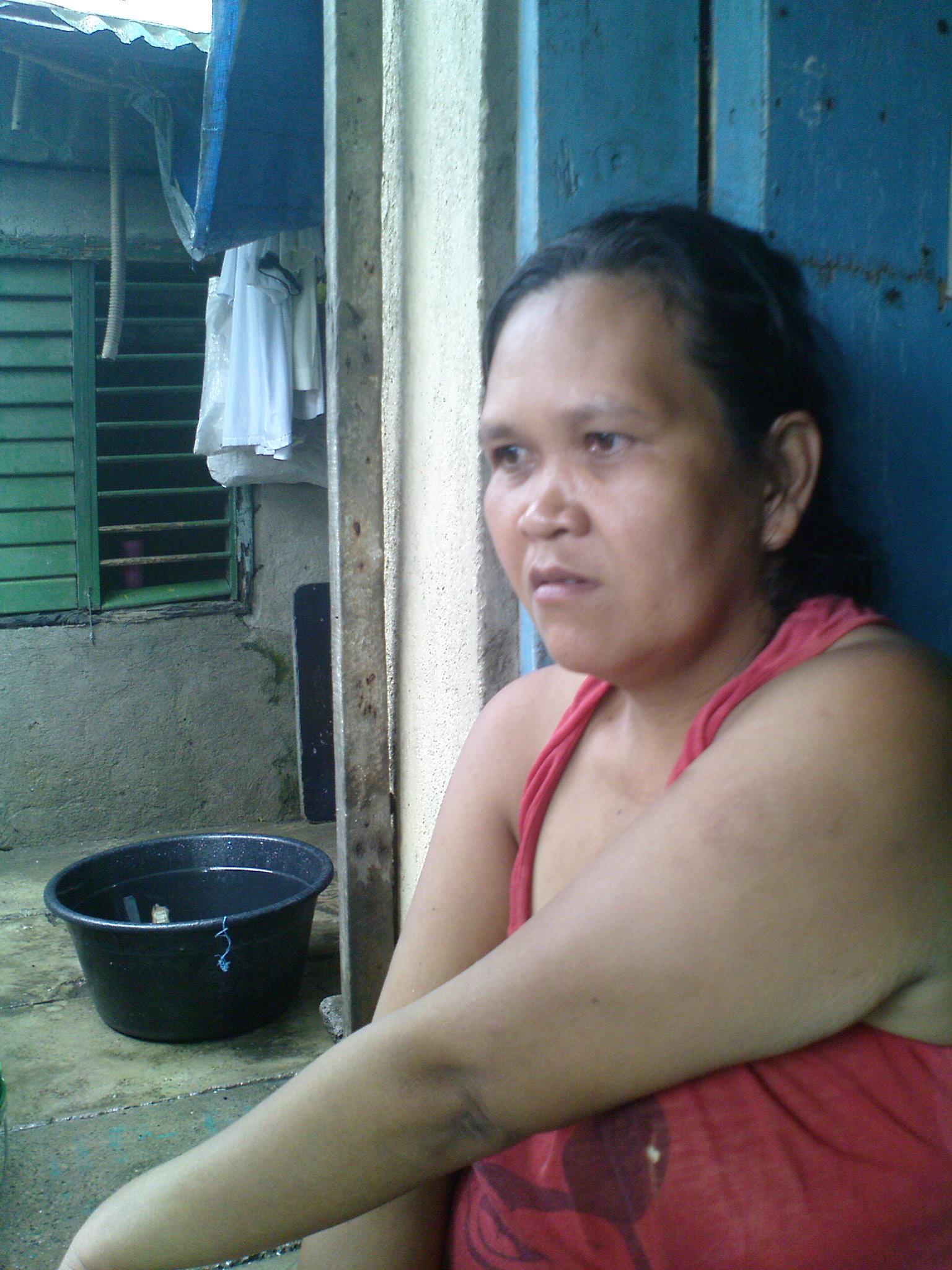 Lenny Mina, a mother of six was interviewed by the DSWD but was not included in the list of the program’s beneficiaries. (Photo by Anne Marxze D. Umil / bulatlat.com)

The study also revealed that the qualifications for beneficiaries are not clear.

The study revealed that many of the respondents shared that they know of some families, mostly their neighbors, who they think deserve the cash assistance but have not been selected. Likewise, they also disclosed that there are families who they think are not really indigent but become beneficiaries of the program.

Lorenzo said one of her neighbors who is also a beneficiary of the said program only got P300 ($7.14) despite having six children, all qualified for the program.

Lorenzo’s neighbor, Lenny Mina, 38, a mother of six was interviewed by the DSWD but was not included in the list of the program’s beneficiaries. “It was during the time of Ondoy that they came here in our house and interviewed me, they even took a picture of our house because there was still flood,” she said. “I wonder why I was not included. My family is poor, my husband does not have a regular job and I have six children who are qualified for the program,” Mina who also has a heart ailment said.

According to the DSWD, households eligible for the program are residents of the poorest municipalities based on 2003 estimates by the National Statistical Coordination Board (NSCB); those whose economic condition is equal to or below the provincial poverty threshold; households that have children 0-14 years old and/or have a pregnant woman at the time of assessment and those that agree to meet other conditions specificied in the program. Mina’s exclusion from the program contradicts the qualifications set by the DSWD.

The CWR also said many of the respondents believe that they have been chosen randomly.

The CWR study revealed that most of respondents said they had been interviewed or surveyed by DSWD and some personally applied at DSWD, while others have been enlisted through their local organizations and through their children’s teacher in school.

Beneficiaries were asked to submit requirements such as birth certificates, marriage contracts and valid IDs. In the study, the respondents said securing the requirements needed is additional burden to them as they had to loan the money to pay for it. “Most of the respondents reported that they spent less than P200 ($7.14) in preparing the necessary documents needed for the program. Most of those who spent only P100 ($2.3) and less have the necessary documents and only had to have these papers photocopied. They also spent for the ID pictures ,which usually cost P50 to P80 ($1.19 to 1.90).”

CWR’s study showed that there is perceived arbitrariness or lack of transparency in the process of selection, delisting, and deciding on the amount that a family would receive. “Such arbitrariness reinforces the culture of dependence as the family would drop everything in order to attend the meetings for fear of being delisted from the list of beneficiaries.”

According to the study, mothers used the money from CCT for the family’s everyday needs. “Most or 37.7 percent of the respondents said they spend the money for food while 16 percent allots the cash for health and only ten percent for educational needs,” the study said.

Seventy-seven percent of the respondents think that having a secure job or source of income would help them in the long term rather than the cash hand-outs.

“We would still prefer jobs. Social services should be free, too,” another respondent said.

Nineteen percent of the respondents said that they don’t see the program as a big help at all.

A recent news report said some of the beneficiaries are forced to use their ATM cards as collateral to borrow money from loan sharks.

The CWR recommends that the government’s economic policies should be reviewed and should serve the interest of its people. “The fact that the government has to intervene and directly give cash to the poor is an admission that such policies can no longer provide economic growth for the most number of its people. Thus, there is a need to remove neo-liberal policies that result to job insecurity, higher prices and persistent poverty,” the group said.