News in Pictures: Los Angeles janitors fight For their jobs 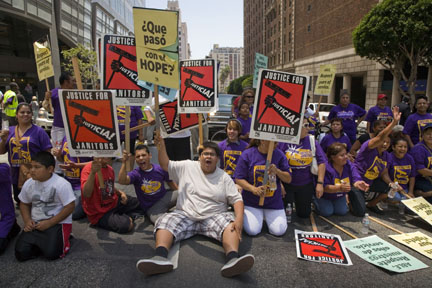 LOS ANGELES, CA – 22JULY11 – Over 1400 Los Angeles janitors, members of United Service Workers West SEIU, protest the firing of immigrant workers by Able Building Maintenence. The company fired workers whose immigration status the company questions, even though the workers have been cleaning the buildings where they work for many years. In protest, workers marched through downtown Los Angeles at lunch hour, stopping in front of buildings where Able has the cleaning contract, and finally sat down in an intersection, stopping traffic. 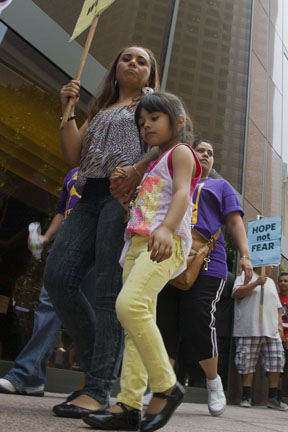 Firings because of immigration status do irreparable harm to workers and to their communities. At Able Building Maintenance and most other companies in this wave of firings, workers have steady, well-paying union jobs and support many other people in their families. Many have worked in their jobs for over a decade, and some for even longer. Marchers asked that Able Maintenance respect their time on the job. 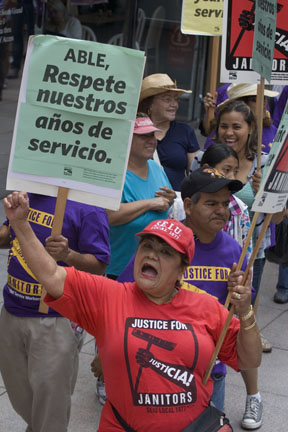 The janitors are not working for the low wages that are common in the worst workplaces. Union janitors make more than minimum wage, and have medical and other benefits. That’s what people are trying to defend – jobs capable of supporting families. That is the goal of most unions, and most working people. Immigrants are no different. 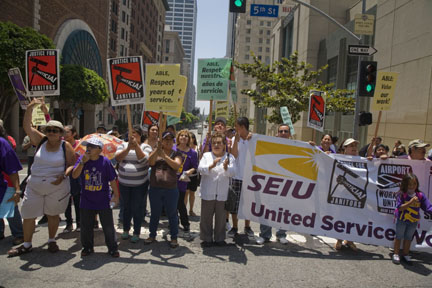 Undocumented workers did not take jobs from anyone. The jobs in these buildings belong to the workers who do them. An immigration check leading to their firing does not create a single job. Instead, it forces people into an underground economy where illegal wages and conditions are prevalent. It does not improve wages and conditions in the workplace. At Able there already is a union contract in place that guarantees healthcare and wages that can support families. 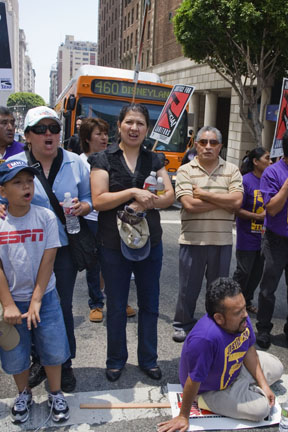 These immigrant workers didn’t cause the unemployment that plagues millions of families. They didn’t close a single plant. Big corporations did. They didn’t cause the economic recession or foreclose on anyone’s home. Big banks did. They didn’t throw money at the banks while failing to establish jobs programs for unemployed workers. The misplaced priorities of successive administrations are responsible for that.The money spent on two wars and the defense industry alone could provide employment to everyone.

If undocumented workers are removed from their jobs, it spells economic disaster for many people, far beyond the workers themselves. Wages fall and the recession gets worse. Employers and workers pay taxes that support local schools and services. The employers have suppliers whose businesses are also harmed. Workers’ paychecks inject hundreds of thousands of dollars into local economies every month, which support other businesses and families. All this is placed in jeopardy by mass firings. 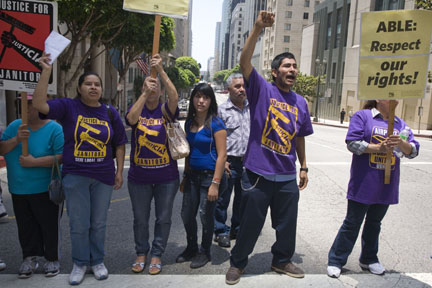 Firing and terrorizing people only weakens their ability to unite and fight for something better, as well as any union’s ability to adequately represent people. Wages go down when unions and workers are weak. That hurts everyone.

Under the Bush administration, armed agents took workers in handcuffs from their workplaces. Immigration firings are less visible, but their impact is just as brutal. If our communities stand for equal treatment for all residents, we should treat these workers and their families with the same respect and dignity that all of us deserve.

(Text and photos by David Bacon)