You Are Here: Home → 2011 → August → 21 → Scrap the budget for Angara’s APECO, farmers and tribespeople asked Aquino

MANILA – Why is the government funding a project that spells disaster to thousands of farmers, fisherfolks and tribal communities in five villages of Casiguran town in Aurora? That is the question repeatedly asked by leaders and representatives of peoples’ organizations as they appealed to the public, last week, to support their calls for stopping the APECO project, and scrapping the budget proposed by the Aquino government for APECO (Aurora Pacific Economic Zone and Freeport Authority).

The proposed budget for APECO amounts to P332.5 million ($7.56-million). And this may still increase when budget deliberations move to the Senate. Based on experience, Anakpawis Rep. Rafael Mariano said, the budget for APECO was increased by the Senate because of Senator Edgardo Angara whose family of politicians is spearheading the project.

So far, the Philippine government has funded the Angara family project in Aurora amounting to P26-billion ($610.5million) since work on it started in 2008. Amid reports of massive “ejectment cases” of farmers and militarization in Aurora driving indigenous peoples away from their ancestral lands, Anakpawis Representative Mariano has supported the appeals to the government of the farmers and indigenous peoples to stop allocating money for what the affected peoples have described as “a disastrous project.”

The Confederation for the Recognition and Advancement of Government Employees (Courage) has established a group called “Government Employees for Land Reform”, because “it is the government employees’ responsibility to implement the law— and the law said land reform should be implemented,” said Santi Dasmariñas, first vice-president of Courage, during the press conference. “That’s why we are opposed to ‘projects’ trampling on rights of the farmers and fisherfolks,” Dasmariñas added. 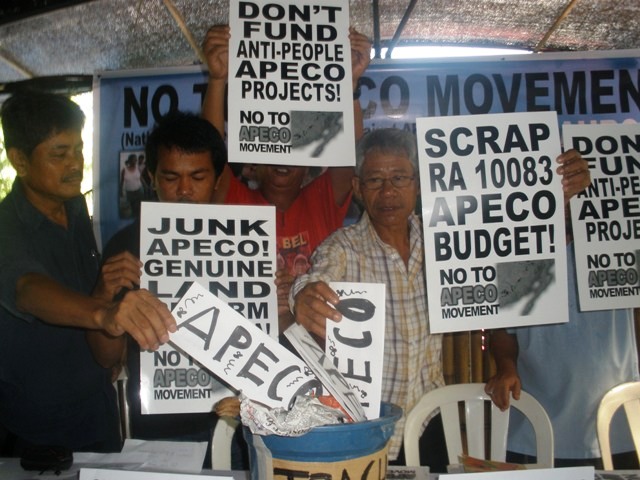 In fact, the Angaras have been using as “instruments for landgrabbing some of the government’s agencies,” charged Joseph Canlas, chairman of Alyansa ng Magbubukid ng Gitnang Luzon (AMGL). In the process, the government itself is violating its laws, said Canlas.

He explained that “the lands that had been supposedly distributed to farmers under the fake CARP would be taken away from them for APECO.” For the indigenous groups of Agtas, who have a pending application under IPRA (Indigenous Peoples’ Rights Act), it is the DENR (Department of Environment and Natural Resources) and the NCIP (National Commission on the Indigenous Peoples) who are functioning as “instruments of the Angara family in landgrabbing,” said Canlas.

The fisherfolks who have rights under the Fisheries Code would be marginalized to give way to foreign interests, said Canlas, who warned of the impending pollution of the Casiguran Bay with the building and use of the Freeport. All in all, Canlas concluded that the existence itself of the Republic Act 10083 establishing APECO is “trampling on many laws that are enacted to supposedly protect the peoples’ welfare.”

Salvador France, vice-chairman of fisherfolks group Pamalakaya, said that during his two-week visit in the Aurora towns of Baler and Casiguran recently, he had seen for himself the abundant wealth of natural resources in its mountains and seas. “Imagine,” he said, “a fish weighing 120 kilos for a fisherman’s catch.”

This is one of the things which the fisherfolks in the area stand to lose because of APECO, said France. He warned the people against the “deceptive land conversion schemes being peddled by the instruments of the Angaras, such as the scheme of using fish cages which they are distributing to some fisherfolks in Casiguran Bay.”
“It will result in hunger— these cages will cause pollution,” France said, similar to the resulting fishkill recently in Batangas and Pangasinan.

France added that the freeport being constructed on lands inhabited and being tilled by thousands of families in Aurora will “result in dislocation of people in the area, and hunger as they lose the lands and the waters that are sources of their livelihood.”

The APECO movement, a broad alliance of peoples’ organizations who are opposed to the project, has conducted a study showing that the APECO project “will not bring development to the people in the area.” According to Elmer Dayson, vice-chairman of farmers’ group PAMANA in Aurora, the people in Aurora are worried because “those they expected to work for them had turned against them.” 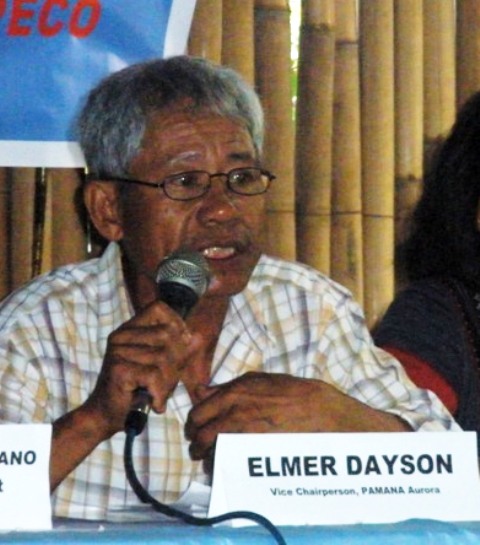 He said the local government did not consider the needs and voice of the people.

Without consulting the farmers and fisherfolks, a mariculture had been established in the area, Dayson said. The Department of Agrarian Reform in the area, he added, just declared that the upland is public land and the people there have no right over those lands. But according to Dayson, if the government had respected the law, that upland should have been granted to the people tilling it for the length of time they’d been there and rendered it productive.

Dayson said that the people in Casiguran and Aurora are now asking: to whom shall we turn now that the people whom we had expected to serve us are the ones who are disadvantaging us?”