MANILA – Transportation secretary Mar Roxas is earning the ire of Filipino workers and people, said the progressive labor center Kilusang Mayo Uno (KMU) in a statement, as Roxas defended the privatization of the MRT and LRT and, according to KMU, also justified the hiring of strike-breakers in PAL (Philippine Air Lines).

Privatizing the railways and subsidizing the profits of private contractors, like what is happening now, has been blamed by various peoples’ organizations as the reason behind the looming fare hikes in MRT and LRT.

“We don’t think this is the best way to prepare for the next elections,” warned Elmer “Bong” Labog, chairman of progressive labor center Kilusang Mayo Uno (KMU), to Mar Roxas who is perceived as gearing up for the next presidential elections.

In the budget deliberations in Congress, Roxas said that if the budget would be raised to increase the government’s subsidy per train passenger, then they (the DOTC) would not run out of funds for subsidies and so they would not have to consider “burden-sharing,” or increasing the MRT and LRT fares. 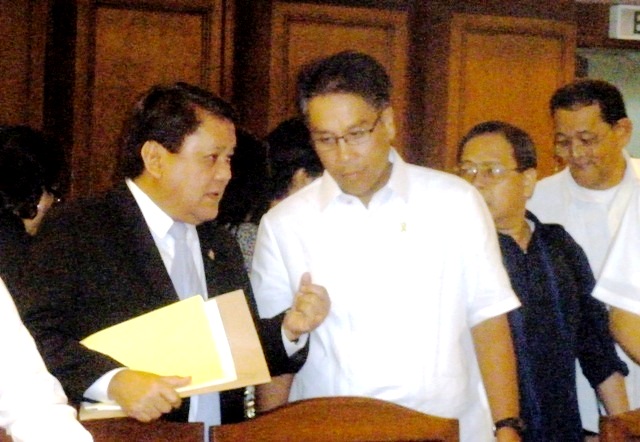 Roxas and other DOTC officials at the budget hearing in Congress.(Photo by Marya Salamat / bulatlat.com)

Roxas’ proposed budget slashed by 38-percent the government subsidy on MRT for 2012—from P6.9 billion ($162.7 million) to P4.29-billion ($101.15 million), despite reports of annual increases in passenger load. Asked by Anakpawis Partylist Rep. Rafael Mariano if the cut meant there would be fare hikes, Roxas replied that they will not be sourcing all the resulting budget shortfall on fare hikes alone.

Roxas asked the Congress to “realign” the country’s tax-based spending because, he said, reminding the lawmakers that it was they who had pointed it out, “only the Metro Manila train riders have been enjoying a train ride that’s P55-subsidized per rider, when the rest of the country who are not in Metro Manila and not riding these trains have also been paying taxes.”

Roxas said it is the taxpayers in other regions who are “losing” in the railways’ operations and not the government. Such imbalance in using public money was not invoked, however, for the rest of the DOTC’s proposed P26.5-billion ($625million) projects in 2012 to build or upgrade airports, ports and lighthouses. Many of which would facilitate the operations of foreign investments in its covered districts, said some lawmakers who asked Roxas to fast-track or improve the said projects.

Roxas emphasized in the budget deliberation and in media interviews the need for “burden-sharing” between the government and the commuters in financing the operations of MRT and LRT.

The transport secretary also appealed to congress that “urgently, we need additional maintenance” of the railways, as “we are using it beyond its service life,” and there is a need to update some to prevent failures or accidents.

The Riles Network who has been pointing out that private operators are only after profits and not public service has predicted before various lapses in maintenance and servicing of the country’s railways. According to them, proper maintenance by the private operators may be sacrificed because they are more concerned about their profits than the sustainability of the railways beyond their contracts.

As the MRT contract for maintenance and servicing with Sumitomo, for example, is about to expire by January next year, Roxas just expressed hopes the DOTC may then craft a contract “more suitable to the aging coaches and other equipment.”

“The government is currently subsidizing the profits of private contractors under the Build-Operate-Transfer scheme before, which is a picture of what will continue to happen under the PPP,” said the Riles Network during a picket at the gates of the House of Representatives before the DOTC budget deliberations.

Under Roxas, the DOTC has proposed a new budget item costing P8.593 billion ($202.7 million) for “project development funds for PPP transport infrastructure projects.” Progressive groups have asked the Congress to scrap those PPPs. They urged the government to use the budget instead for building those transport infrastructures, so that when the public start using it, they would not be charged high user fees.

Progressive workers and transport groups have pointed to “exorbitant toll fees” in South Luzon Expressway as one of the reasons why transportation infrastructures should remain publicly owned and controlled and for public service.

Budget for milking the drivers and motorists

Many transport groups in the country have protested the revised DOTC fines and penalties for various traffic violations. The fines and penalties were not only increased since 2008 under the DOTC order nos. 38 and 39, it was also expanded to include other “infringements,” such as wearing undershirts while driving, said Piston.

Transport groups have been demanding to scrap the said DOTC orders, arguing that these were instituted only in the guise of instilling “discipline” among drivers and resolving the traffic problem. The Pinagkaisang Samahan ng mga Tsuper at Operator Nationwide (Piston) charged that these DOTC orders are being implemented as the government’s “money-making schemes.” Aside from increasing the “legal exactions” being sucked from the drivers and motorists, it also caused an increase in “illegal exactions” such as bribes or “tong,” George San Mateo, secretary-general of Piston, said. These money-making schemes, as Piston calls it, are being continued under Roxas.

(Read: Jeepney Drivers as milking cows of the government)

Roxas reported in the budget hearing that “The consolidated 2010 actual income collected by the DOTC and our offices which remit income to the National Treasury amounts to P14.98 billion ($353.4 million).” The DOTC has exceeded its 2010 targets by 5-percent. For this year, its target is P15.1-billion ($356.3 million), and they may exceed that, too, for the department has already collected more than half, or P8.3-billion ($195.8 million), in the first half of the year alone.

For 2012, the DOTC is aiming for P15.7-billion ($370.4 million), a 3.8-percent increase of projected income compared to this year. The increase would not come from new fees, Roxas assured Anakpawis Rep. Rafael Mariano. Roxas said “this only represents an ordinary increase.”

For the Department of Public Works and Highways (DPWH), however, there were suggestions floated in Congress to raise transportation fees in public vehicles to augment the DPWH’s budget for Motor Vehicles User Fund, from P8.5 billion ($200.5 million) to P10.2 billion ($240.7 million) next year.

Disregarding the workers’ rights in PAL and LRT

This week, Transport secretary Mar Roxas has asked the management of Philippine Air Lines to set up a “contingency plan” in case its workers launched a strike in the country’s flag carrier. In so doing, Roxas has unveiled a “brazen order” for the PAL management to hire scabs, the KMU said in a statement.

The possibility of a strike in PAL arose after President Benigno “Noynoy” Aquino III sided with PAL management and approved the airline’s outsourcing plans which the airline’s union said would cause the layoff and contractualization of some 2,600 of its regular workers.

“Just like Noynoy, Mar is using the interest of the public to justify plans to sabotage a possible workers’ strike in PAL,” Labog said in a statement. He added that his group has trust “that the public will understand a strike by PAL workers because they stand to lose their regular jobs just because Lucio Tan wants to implement a scheme that will increase his profits.” 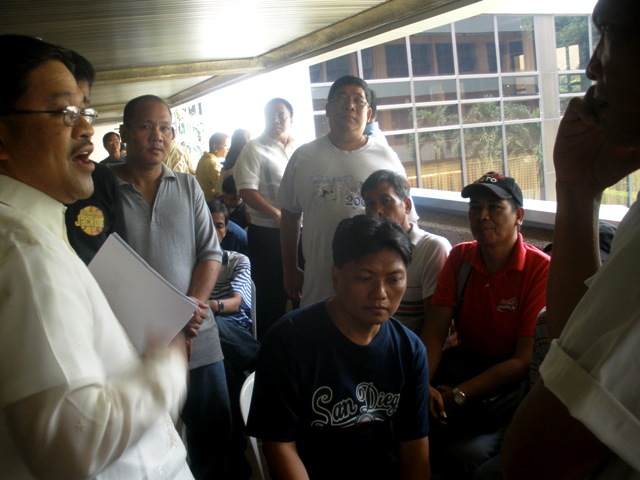 Roxas also disappointed the former LRT workers who trooped to the budget hearing in Congress last week. Asked by Bayan Muna Partylist Rep Neri Colmenares if Roxas has included in the DOTC budget allotments for the separation pay of illegally dismissed LRT workers, Roxas replied no.

The striking LRT workers were summarily dismissed from their jobs 16 years ago for having defied an assumption of jurisdiction’s return-to-work order by the labor secretary. After a lengthy legal battle, the Supreme Court described the company employing the LRT workers at the time “was a labor-only contracting company, under the government,” said Colmenares of Bayan Muna. This, he said, is proof that the LRT workers’ employer is the government.

In 2004 the DOTC successfully snagged a P271-million ($6.4 million) budget for the LRT workers’ separation pay, pending the court resolution about the workers’ legal employer. But the said budget only reverted to the Department of Budget and Management after the disbursement of separation pay was snagged by legal questions about the LRT workers’ rightful employers, Sammy Malunes, LRT workers’ union president then, and now spokesperson of Riles Network, told bulatlat.com.

“You might have expected such treatment from capitalists in the private sector, but not from the government,” Colmenares said during the DOTC budget hearing.

In response, Roxas asked the Congress to hold the LRTA liable first, as it is “not so much a question of appropriating budget for the workers’ separation pay as the government admitting the employer-employee relations.” But he also warned the lawmakers against its “geometric consequences.”