There would be at least 300 protesters in about 50 protest centers in communities, highways and factory belts in Metro Manila alone on Aug 31, said Elmer ‘Bong’ Labog, chairman of progressive labor center Kilusang Mayo Uno (KMU).

MANILA – A nationwide peoples protests combined with a “warning dry-run” of transport strikes in some parts of the country against oil “overpricing” and the oil deregulation law are slated this Aug 31. George San Mateo, secretary-general of Pinag-isang Samahan ng Tsuper at Operator Nationwide (PISTON), called on President Benigno “Noynoy” Aquino “ III and the “oil cartel” “to listen to our demands and don’t push the peoples and transport organizations into launching a unified transport strike.”

The protesters are demanding a “big-time oil price rollback of P9 ($0.21),” which they estimated as the total overprice of oil products in the country. They argued that on top of this amount, the oil companies operating here still have hidden layers of sources of profits considering that they constitute a global monopoly and they have been known to engage in transfer pricing, among others, said the protesting groups.

These taxes do not return as services or aid to the people, San Mateo said. He estimated that jeepney drivers alone contribute to the government P35 million ($827 thousand) per day in taxes on oil products, and the tricycle drivers P22 million ($520 thousand) per day. And yet, the same drivers are languishing in poverty, enjoying no housing or social services from the government, San Mateo said. 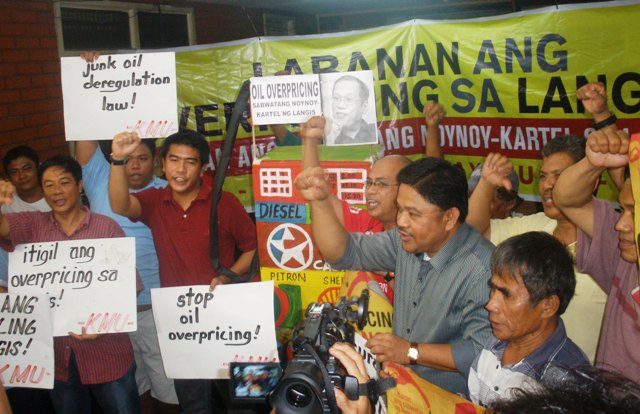 The transport groups in the country have also criticized the Aquino government’s “pantawid pasada” as practically useless, and difficult to acquire for the individual public utility drivers.

The P9 oil price rollback is needed to make a dent on prices and to provide ‘immediate relief” to the people, said San Mateo. He said they cannot be content with a small rollback, which hardly makes a dent on prices of other basic goods.

“We hope the people themselves will stand up and press the government to stop the plunder of our peoples’ hard-earned wages by these monopoly oil companies,” said Labog. He urged the public to go out on Aug 31 and “register their fury against the oil companies’ blatant exploitation of the Filipino people.” He added that their demand for at least P9 oil price rollback would only “fall on deaf ears” if the people didn’t come out to protest in big numbers.

There would be at least 300 protesters in about 50 protest centers in communities, highways and factory belts in Metro Manila alone on Aug 31, said Elmer ‘Bong’ Labog, chairman of progressive labor center Kilusang Mayo Uno (KMU).

Other big transport federations in Metro Manila are reportedly in talks with Piston over the possibility of launching a “unified transport strike,” the protests on Aug 31 would be a “contribution to its preparation,” said San Mateo.

Department of Energy Undersecretary Jay Layug said last week, amid protests against the Big Three’s oil price increases that not only ignored the DOE’s ordered P2 rollback but also increased it back in just a few days, that oil prices would be going down this week. But instead of that happening this week, the Big Three raised their pump prices anew.

This is an example of how the oil companies have been overpricing their oil products, said George San Mateo, secretary-general of Pinag-isang Samahan ng Tsuper at Operator Nationwide (PISTON). He accused the government of not doing enough to protect the public against the oil companies’ “unlimited profit margin,” as the government cites the Oil Deregulation Law as excuse for letting it happen.

Because of oil deregulation law, the oil companies are also able to misrepresent their crude and oil import to bring down their taxes, said San Mateo. As of last week, he noted that since Aquino became president, the pump prices of diesel have gone up by P14, gasoline by P15.

In Congress, Anakpawis Partylist has a pending bill urging to scrap the oil deregulation law. Anakpawis Rep. Rafael Mariano urged the public to put pressure on their lawmakers to pass that bill as soon as possible, along with another proposed bill by his co-author, Bayan Muna Rep Teddy Casiño, which proposes to revert to oil regulation.

Since the oil deregulation law was implemented, Mariano said, the Filipino people has had no protection nor voice against the overpricing and other unseen manipulations of the giant oil cartel. “Free competition didn’t happen with oil deregulation, least of all lower oil prices,” Mariano added. He urged the public to join the Aug 31 nationwide peoples protest “against the plunder of oil companies.”