You Are Here: Home → 2011 → September → 1 → Mothers, lawyers of 2 missing UP students incredulous over soldier’s denial

Mothers, lawyers of 2 missing UP students incredulous over soldier’s denial

MANILA – One of the security escorts of retired Gen. Jovito Palparan Jr. denied any involvement in the abduction of University of the Philippines (UP) students Karen Empeño and Sherlyn Cadapan and farmer Manuel Merino.

In his counter-affidavit submitted to the Department of Justice (DOJ) panel, August 31, Staff Sgt. Edgardo Osorio said he was neither assigned to the 7th Infantry Division of the Philippine Army nor instructed by Palparan at any given time.

Osorio was identified by one of the witnesses, Wilfredo Ramos, during the July 19 hearing on the preliminary investigation on the criminal complaint filed by the mothers of Karen Empeño and Sherlyn Cadapan last May.

During the August 21 hearing, Osorio was named as one of the accused in the criminal complaint filed against Palparan, former commanding general of the 7th Infantry Division of the Philippine Army; and several other military officials. Also charged are commanding officers Lt. Col. Rogelio Boac of the 56th Infantry Battalion and Lt. Col. Felipe Anotado of the 24th Infantry Battalion, M/Sgt. Rizal Hilario. The charges include rape, serious physical injuries, arbitrary detention, maltreatment of prisoners, grave threats, grave coercion, among others.

In his supplemental affidavit, Ramos positively identified Osorio as the one who hogtied him and his father inside their house in Hagonoy, Bulacan on June 26, 2006. Ramos said Osorio was part of the team that took Karen and Sherlyn and Merino.
Asked by reporters about the accusation hurled against him, Osorio, who avoided eye contact with anyone, said, “I don’t know anything. Suddenly, they implicated me.” 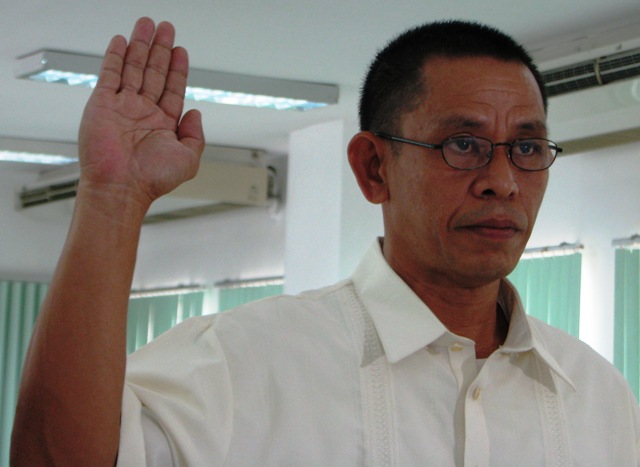 Staff Sgt Edgardo Osorio, one of the suspects in the abduction of two UP students, swears by his affidavit. (Photo by Ronalyn V. Olea / bulatlat.com)

Asked if he had worked for Palparan, Osorio said it was his first time to work for Palparan when he provided security for the retired general during the July 19 hearing. He added that he has never been assigned in Bulacan.

Osorio is now assigned at the 24th Intelligence Service Unit of the Philippine Army based in Fort Bonifacio.

Asked about his whereabouts on the day of the incident, Osorio said he was in Fort Bonifacio in Taguig City processing his papers for Liberia. Based on the photocopied documents he submitted to the DOJ panel, Osorio was at the Army Personnel Management Center (APMC) from May 2005 to July 2006 and was sent as a member of the Philippine contingent to Liberia from July 2006 to March 2007.

In his affidavit, Osorio said Ramos and another witness, Alberto Ramirez, were on a fishing expedition when they pinpointed him as one of the abductors. He said he was only implicated when the witnesses realized that the other security escort of Palparan was not yet an enlisted soldier at the time of the incident.

Edre Olalia, secretary general of the National Union of Peoples’ Lawyers (NUPL) and a member of the seven-man legal team for the complainants, called Osorio’s statement as misrepresentation.

Olalia said that from the start, it was clear that Ramos was referring to Osorio and not to the other soldier. At the time Osorio was not yet named, the Provost Marshal of the Armed Forces of the Philippines, Col. Herbert Yambing, submitted the name of the other soldier who also provided security for Palparan during the July 19 hearing.

When the lawyers pointed out that it was a different person, Yambing said it was an honest mistake.

Ramos who was present at today’s hearing maintained that Osorio was part of the team that abducted the three activists.

Ramos said he could not forget Osorio’s face. While he admitted that he is still nervous, Ramos said he will stand by the truth.

Concepcion Empeño, mother of Karen, said she believes Ramos. “He has no reason to lie. I believe in what he says,” she told Bulatlat.com.

Edre Olalia, secretary general of the National Union of Peoples’ Lawyers (NUPL) and a member of the seven-man legal team for the complainants, said “alibi is the weakest defense.”

“Assuming for the sake of argument that the documents are true, it doesn’t mean that he could not be involved. The operations [to abduct, to kill] are covert,” Olalia added.