You Are Here: Home → 2011 → August → 11 → Military fails to present soldier linked to abduction of UP students

Military fails to present soldier linked to abduction of UP students

MANILA – The soldier who has been implicated by one of the witnesses in the abduction of University of the Philippines (UP) students Karen Empeño and Sherlyn Cadapan and farmer Manuel Merino remains unidentified.

During the fourth hearing on the preliminary investigation of the Department of Justice (DOJ) panel this morning, the Provost Marshal of the Armed Forces of the Philippines (AFP), submitted a report on the personal circumstances of one of the security escorts of retired Major General Jovito Palparan Jr. The person identified in the report submitted by the AFP turned out, however, to be a different person from the one identified by the witness.

During the July 19 hearing on the criminal complaint filed by the mothers of the two UP students, farmer Wilfredo Ramos saw the soldier, who hogtied him and his father on June 26, 2006, seated behind Palparan. In his supplemental affidavit, Ramos said the soldier was part of the team that abducted the three activists from their house in Hagonoy, Bulacan more than five years ago. Lawyers of the complainants asked the DOJ panel to enjoin the AFP to identify that particular person.

During the August 4 hearing, Provost Marshal Col. Herbert Yambing confirmed to the DOJ panel that the person being referred to by Ramos is a member of the Philippine Army and has been providing security for Palparan during court hearings. In today’s hearing, Yambing supplied the personal circumstances of a different soldier.

Edre Olalia, a member of the legal panel for the complainants and secretary general of the National Union of Peoples’ Lawyers (NUPL), told the DOJ panel that the soldier in the Provost Marshal report is totally different from the person they are referring to.

“There is an obvious discrepancy. I talked to Col. Yambing and [Domingo] Tutaan and specifically pointed to the man seated at the second seat of the second row immediately behind Palparan. How could he [Yambing] submit the name of a different person?” Olalia said after Yambing presented his report.

Tutaan is the head of the AFP Human Rights Office. He was not present during today’s hearing.

While Olalia was speaking, Yambing went back to his seat at the back of the room.

“It was an honest mistake,” Yambing told reporters after the hearing. “I asked the [military] unit and they gave me that name,” Yambing said, referring to the General Headquarters of the Philippine Army that provides security for Palparan.

Human rights lawyers said the identification of the soldier is necessary in amending their complaint. The unnamed soldier, Olalia said, is one of several “John Does” in the complaint filed against Palparan,
former commanding general of the 7th Infantry Division of the Philippine Army; his commanding officers Lt. Col. Rogelio Boac of the 56th Infantry Battalion and Lt. Col. Felipe Anotado of the 24th Infantry Battalion, M/Sgt. Rizal Hilario. The charges include rape, serious physical injuries, arbitrary detention, maltreatment of prisoners, grave threats, grave coercion, among others. 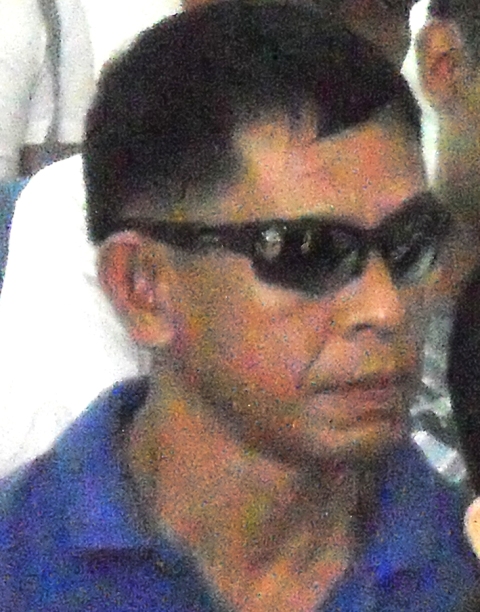 A photograph of the soldier identified by one of the witnesses as among those who abducted the two UP students. (Photo courtesy of Karapatan / bulatlat.com)

During the last hearing, the DOJ panel ordered the Provost Marshal to coordinate with the legal team of the complainants. “We were waiting for the colonel to approach us,” Olalia said. Yambing did not contact them until the hearing this morning.

In an interview, Linda Cadapan, mother of Sherlyn, said the Provost Marshal should have been more diligent in doing its job. “He should have first verified with our lawyers before submitting a report,” she said.

“Now, I can’t avoid doubting if he [Yambing] would really help to ferret out the truth. Or will he cover up the atrocities of the military?” Mrs. Cadapan said.

DOJ panel head Assistant State Prosecutor Juan Pedro Navera ordered the name of the soldier submitted by Yambing to be scrapped from the court proceedings.

“Find that person, identify him based on the photograph provided by Atty. Olalia,” Navera told the Provost Marshal.

Yambing said he will comply with the order.

In a statement, Karapatan chairwoman Marie Hilao-Enriquez said:“We have yet to see in concrete what the AFP means when they assured the DOJ panel of their cooperation in seeking for the truth and resolving this case. Otherwise these words would only remain as part of their psywar tactics.”

“So far, the AFP either makes the witnesses and the victims appear liars or it makes a fool of the victims and witnesses. These actions do not encourage trust and confidence on the military but rather lead us to think that the AFP is trying to cover up for the misdeeds of their soldiers and pass this off as ‘honest mistakes’ as what Col Yambing offered as a lame excuse in today’s hearing,” said Hilao-Enriquez.