The British government has proposed changes on regulations on settlement and overseas domestic workers. These changes aim to restrict the options to settle for non-European Union migrants coming to the UK under work related visas.

Migrant rights activists in the United Kingdom are campaigning for the retention of the Overseas Domestic Worker (ODW) visa even as they fight against attempts of the government headed by Prime Minister David Cameron to limit the rights of migrants in the UK. Observers said these measures have been prompted by the global economic crisis and European countries are turning to curtailing migrant labor rights as a move to somewhat stem the crisis.

A visa or travel visa is a document which gives someone permission to travel into a specific country and stay there for a set period of time. Some nations require everyone who enters to get a visa, while others have what are known as reciprocal agreements with certain nations which waive visa requirements. In the UK, foreigners, particularly those working as domestic help, ar provided ODWs which allows them to work and stay for a duaryion of time in the country. Possessing an ODW also bestows specific rights to the migrant worker.

Migrante in Europe and the United Kingdom as well as Kalayaan, groups advocating for the rights of migrant domestic workers, have opposed the plans of the UK government to abolish the ODW visa.

The British government has proposed changes on regulations on settlement and overseas domestic workers. These changes aim to restrict the options to settle for non-European Union migrants coming to the UK under work related visas. It is also considering abolishing the ODW visa. One of the aims of the government with these changes is to increase the number of migrants leaving the UK and therefore bring down the figures for net migration.

Among the proposed changes are categorizing all visas into “temporary,” meaning not leading to settlement; and “permanent,” which would allow migrants to apply for settlement. There are also the proposals to restrict the period of leave for Tier 5 visas (of migrant workers) to a maximum of 12 months and remove the possibility to bring dependents; close the domestic worker visa or retain it with a time restriction of six months (12 months if accompanying a skilled worker); restricting visas for private servants in diplomatic households to 12 months.; and removing the rights of overseas domestic workers to bring dependents to the UK. 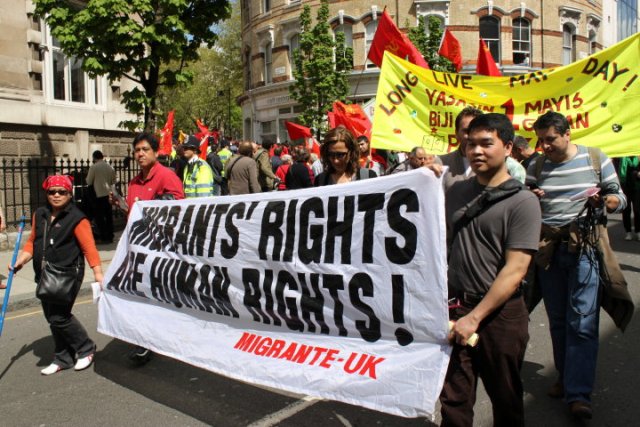 Members of Migrante-UK in a rally(Photo courtesy of Migrante International / bulatlat.com)

The UK Border Agency is conducting a public consultation that will run September 9, 2011.

According to Kalayaan, the existing ODW visa provides a vitally important safeguard for some of the most vulnerable and isolated workers in the UK. It said the government’s proposal to abolish the ODW visa and replace it with a six-month visit visa — under which migrants have no employment rights and no right to change employers — greatly increases the risk of exploitation and the likelihood of trafficking.

“Domestic workers are some of the most vulnerable and exploited people in the UK. Our research suggests that 56 percent of domestic workers receive a salary of only £50 (US$81.55, with one British pound equivalent to US$ 1.6305) or less per week. Majority of them are ‘on call’ 24 hours a day, seven days a week. A shocking 54 percent of domestic workers are subjected to psychological abuse, with 49 percent not being given their own room and 67 percent not allowed to take a day off. A small but significant minority also experience physical abuse (18 percent ) and sexual abuse (3 percent). The ODW visa crucially allows domestic workers to leave abusive employment and work within another household,” the group said.

Kalayaan ang Migrante United Kingdom demand that the UK government retain the ODW visa and ensure that all overseas domestic workers have the right to change employers including those in diplomatic households.

“Migrant domestic workers should be recognized as workers. The government should ensure domestic workers who are in full-time domestic employment are able to apply to renew their visas and allow domestic workers the right to apply for settlement. These are just and reasonable calls; these are humane demands that a society which calls itself just and humane should uphold,” they said.

According to the group, granting visit visas to workers will create an underclass of thousands of women workers who will have no protection under employment law and allow for exploitation with impunity.

Minister for Employment Relations, Edward Davey recently stated that the UK government “as a rule does not differentiate between domestic workers’ rights and those of other workers.” The proposed changes, migrant rights advocates said, contradict the government’s position with regard to domestic workers.

“The proposals will not significantly reduce net migration as 94 percent of domestic workers return home with their employer within the term of their first ODW visa,” Kalayaan said.

The group said the ODW visa works well; only approximately 1000 of the entrants on domestic worker visas each year renew their visa, but for those who benefit from its protection, it is a lifeline.

“Figures of visas issued and of renewals remain stable and the previous government agreed this shows the visa is not “abused.” Grants of settlement to migrant domestic workers accounted for only 0.5 percent of the total grants of settlement in 2009,” it explained.

Those supporting the abolition of the ODW visa asset that its removal will result to more jobs for British or EU workers. They point out that locals will be able to take over the jobs that will be left by migrant workers.

The argument is quashed by Kalayaan, saying that the Recruitment and Employment Confederation (REC) supports the current visa scheme. The REC, the group said, has stated that it is not possible to recruit EU citizens for jobs based in private family homes. Most EU residents have family responsibilities of their own and cannot work under “live-in” arrangements.