“It is sad that the CSC, which should have been aiding public sector employees, is engaged, instead, in undermining our hard-won gains.” – Rose deBlois, vice-president of Courage.

MANILA – When the urban poor community behind the Central Bank was burned down, it was revealed that many government employees were living there. When the urban poor community in North Triangle faced the threat of violent demolition, many government employees working at the Quezon City Hall, Department of Agriculture, National Food Authority, Fisheries and Philippine Charity Sweepstakes Office (PCSO), among others, were adversely affected, as they happen to compose some of the area’s urban poor residents.

That, said Erwin Lanuza, president of the Quezon City Hall Employees Association, a COURAGE affiliate, underscores the “dismal situation” of the country’s government employees. “Behind our pretty uniforms is the shameful reality that government employees are deprived of basic needs to live decently,” said Lanuza in a picket protest before the office of the Civil Service Commission (CSC) recently.

During the celebrations marking the 111th year of the Civil Service Commission beginning this month, also dubbed by the government as Civil Service Month, government employees from different agencies affiliated with the Confederation for Unity, Recognition and Advancement of Government Employees (COURAGE) protested before the office of the CSC to condemn what they describe as “ironic” activities of the said commission. 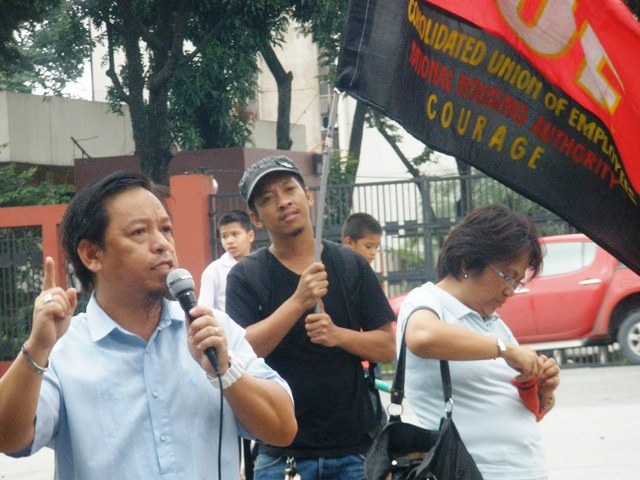 The CSC exists to “ensure protection of the government employees and to raise the dignity of civil service,” said Lanuza. But on the occasion of the CSC’s 111th anniversary, Lanuza said, the country’s civil servants have nothing to celebrate because their rights are being trampled upon, and the CSC is not doing anything to stop it. He said government employees cannot afford to live in dignity, as their meager salaries cannot get them a decent housing, a sufficient budget for health and a decent education for their family.

“It is sad that the CSC, which should have been aiding public sector employees, is engaged, instead, in undermining our hard-won gains,” said Rose deBlois, vice-president of Courage. She asked the CSC why it is helping “to harass government employees to bar them from achieving and enjoying their benefits which they won in collective negotiation agreements (CNA),” for example, and why the CSC is “not helping government employees but is instead abetting retrenchments?” DeBlois said. She added that government employees are serving millions of Filipinos who are increasing by the day, yet they are being deprived of the “crumbs” they have managed to acquire for themselves through their collective mass actions and collective negotiation agreements.

“Given the depressed wage levels of government employees, we need all the more today the hard-won benefits secured by our unions through collective negotiation agreements (CNA),” said Ferdinand Gaite, national president of Courage, in a statement. He accused the CSC of having “allowed itself to become an instrument of the state in making it more difficult for ordinary government employees to achieve even minuscule benefits.” This the CSC has been doing by “blatantly interfering even in the already concluded and signed agreements between the employees and management,” Gaite explained.

It takes a new legislation to adjust the wages of the country’s 1.3-million government employees. But through concerted action per government agency, the employees have been able to improve or achieve some benefits which, upon signing an agreement between the concerned government agency and the registered bargaining union or employees association, become binding for the two parties. This is the collective negotiation agreement (CNA), almost an equivalent of the collective bargaining agreement (CBA) in the private sector but for the wage setting aspect. 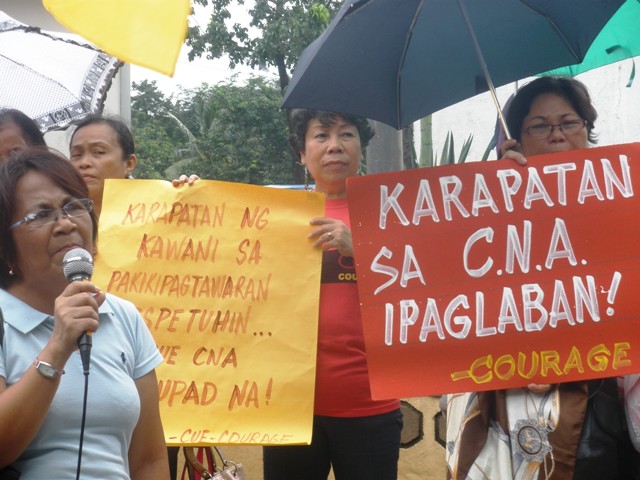 This CNA, however, is now subject to “review” by the Civil Service Commission (CSC), as the management of various government agencies start insisting more forcefully these days to have these CNAs “registered” with the CSC. The government employees’ complaint is that during the “review,” the CSC removes some of the benefits already agreed upon and signed by the union and management.

“It’s like they are setting aside the CNA,” said Lelet Osit, member of the board of directors of the Consolidated Union of Employees of the National Housing Authority. She told Bulatlat.com that in their union’s past two signed CNAs, it has not been like this. “Every time we submit (CNA), the CSC wants to delete some provisions even if they are already negotiated and agreed upon by the management and the union,” said Osit.

“We in Courage challenge the CSC and the Aquino administration to promote the public sector employees’ right to self-organization and right to collective bargaining and negotiations,” Gaite said in a statement. He added that this September, also Civil Service Month, they would demonstrate as “genuine public servants their readiness to advance their rights to a substantial wage hike and benefits, job security and humane standards of living.”