You Are Here: Home → 2011 → September → 10 → 7-year-old girl killed by a soldier; residents call for military pullout in ComVal

7-year-old girl killed by a soldier; residents call for military pullout in ComVal

“Because of military deployment in civilian communities, the lives of the children are placed in great risk.” – Children’s Rehabilitation Center

MANILA – Almost midnight of September 3, seven-year old Sunshine Jabinez was peacefully sleeping inside the house she shared with her parents when a soldier went amok, fired his gun into the air and a bullet found its way into Sunshine. Her shocked parents immediately rushed Sunshine to the Pantukan District Hospital, but the child was pronounced dead on arrival.

The Children’s Rehabilitation Center (CRC) in the Southern Mindanao Region said a member of the the 71st Infantry Battalion of the Armed Forces identified as Private First Class (Pfc) Baltazar M. Ramos fired his armalite indiscriminately after figuring in a heated altercation with a fellow soldier. Ramos was reportedly with several others drinking that night in a videoke bar.

According to reports, the fight began when one of Ramos’ drinking companions attempted to hit him with a bottle. Ramos then allegedly took his rifle from his patrol base and went after his attacker. The other soldiers attempted to pacify him and succeeded in removing the ammunition magazine, but one bullet apparently remained in the chamber. In the struggle Ramos accidentally pulled the trigger of his rifle and his bullet flew straight into the Jabinez family’s house and hit Sunshine.

“Her parents only learned that their daughter was shot when they heard her cry ‘agay’ (ouch),” said Edessa Sandra A. Campos, CRC-SMR’s advocacy officer.

Campos condemned what she said was the military’s attempts to convince the public that they are deployed in civilian communities to further peace and development programs. 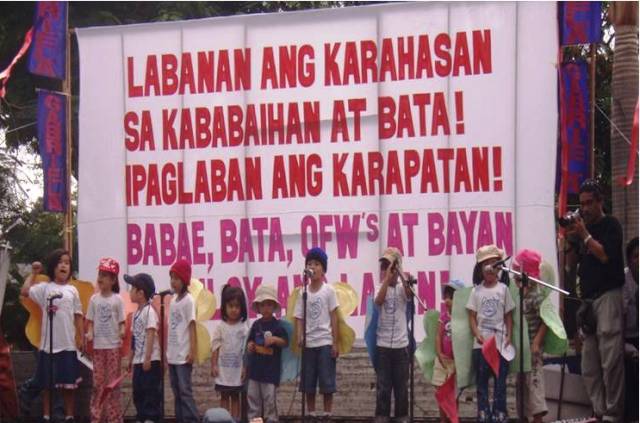 “In reality, these peace and development teams of the 10th Infantry Division are no different from the division’s Re-engineered Special Operations Teams (RSOT) which are also deployed in communities. Because of military deployment in civilian communities, the lives of the children are placed in great risk. Sunshine was killed because soldiers were deployed near where she lived,” she said.

The children’s rights advocate also condemned how the AFP also employs children in counter-insurgency operations, including to serve as guides to track down the members of the New People’s Army (NPA).

In 2007, elements of the 67th Infantry Battalion killed Grecil Buya, a Grade 2 student of Simsimen Elementary School, in an encounter with the NPA. The military asserted that Grecil was a NPA child soldier and at the time she was killed was carrying an M-16 rifle and firing at the military. Investigations and documentation showed otherwise.

In September last year, the CRC also handled the case of “Amanda”, then a minor, who was presented to the media as a “child soldier” by the 84th Infantry Battalion under 10th Infantry Division. Amanda was also included in the military’s top 3 list of “child soldiers” in the Philippines. Investigations also proved military allegations wrong.

“Military presence, however they justify it, is indeed a threat to civilian populace, specially to the children,” Campos said.

Campos said the Aquino government should enforce international and local laws and agreements that protect the rights of children.

“Aquino would do well to respect and implement the Comprehensive Agreement on Respect for Human Rights and International Humanitarian Law (CARHRIHL) the Government of the Philippines forged with the National Democratic Front of the Philippines; as well as the United Nations Convention on the Rights of the Child (UNCRC). He should also order the immediate pull out of military troops in the community and support calls for the immediate prosecution of military perpetrators of the countless atrocities against children and minors,” Campos said.

Military should stay away from civilian communities

In a related development in Davao City, the Kilusang Magbubukid ng Pilipinas – Southern Mindanao expressed support to the Sangguniang Panglungsod resolution calling for the pull-out of the 69th IBPA’s detachment currently installed near a school in Brgy. Paradise Embac Paquibato District. The group, however, expressed disappointment over Davao Mayor Sarah Duterte’s refusal to support the same measure proposed by Councilors Leah Librado – Yap and Jimmy Dureza. The two councilors said the military should leave Paradise Embac because they posed serious threats against the safety of children in the area.

The 69th IB’s detachment is currently found a mere 10 to 15 meters from the primary school.

Pedro Arnado, chairperson of KMP-SMR said it was disappointing how Duterte appeared to agree with military’s claims that the detachment in question was welcomed by residents and that it had been in the community for a long time.

“She should hear what her constituents really think and how they feel about these lies by the AFP, ” he said.

The peasant leader said Duterte should check complaints various parents and citizens have lodged against the 69th IB. He said in the Paradise Embac Parent-Teacher’s Association of the Basic Education Assistance Module (BEAM) program, parents, teachers and the rest of the community were appealing for the removal of the detachment and the pull-out of the soldiers.

Arnado said parents and teachers will attest that the 69th IB’s detachment was only constructed in July this year. “It’s the military operations that have been continuing for a long time. Paquibato lumads and farmers have always resisted the abuses of the military and campaigned against them,” he said.

“The said appeal served as the basis for the resolution sponsored by Councilors Librado-Yap and Dureza,” Arnado said. According to Arnado, the resolution aims to uphold the basic human rights of the Paquibato residents, especially the rights of children to be free from dangers posed by military detachments which use civilian communities as shields.

He said the AFP’s RSOT units are only masquerading as Peace and Development Teams (PDT), and soldiers “are rampantly holding lumad and farmer communities hostage, encamping within their communities, to the point of imposing food blockades and curfews which all affect the peoples’ livelihood,” he said.

The peasant leader also said the AFP in Davao is violating provisions of the Geneva Conventions wherein the protocols of war are stated and should should be respected by governments and contending belligerent forces. “Military forces are prohibited from installing military detachments in civilian areas, and military forces should not be allowed to congregate in public places,” he said.