“We need a revenue-transparent and domestic-oriented mining production system, and the revenues should be utilized for the development of the communities and social services for the poor.” – Kalikasan People’s Network for the Environment

Mining for the people, not for foreign mining corporations.

This was the call of environmentalist groups and organizations advocating the rights of indigenous peoples as they successfully protested against the Mining Philippines 2011 Conference of the Chamber of Mines of the Philippines held at Sofitel Plaza Hotel last September 13. The chamber held a three-day conference on how to further liberalize the local mining industry.

At least a dozen environmental activists led by the Defend Patrimony Alliance were able to go past hotel security and hold a lightning rally right in front of the hotel lobby, while the rest of the protesters numbering some 200 held a program on the sidewalk. They initially resisted moves of hotel security guards to push and shove them away from the hotel grounds, but later proceeded to the other side of the road still fronting the hotel. 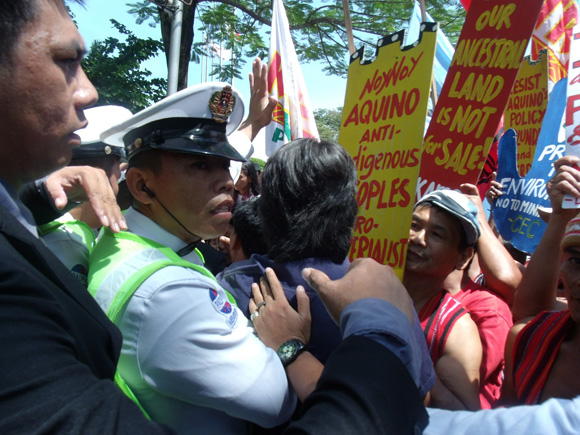 Clemente Bautista, convener of Defend Patrimony and coordinator of the Kalikasan People’s Network for the Environment said they held the protest on behalf of the hundreds of thousands of Filipinos negatively affected by the liberalization of the mining industry. He explained that by no means is their group anti-mining; what they are against is the destructive practices of mining companies and how Filipinos do not benefit from the industry.

“Mining magnates and foreign corporations have gathered to discuss how to extract more profit from Philippine mining resources, but what is needed is the creation and implementation of a pro-people, pro-environment mining policy that would benefit our economy and communities,” he said. Clemente said Defend Patrimony has also been been calling for a moratorium on approvals of mining licenses.

Clemente said they are not against mining and foreign investments per se, but to foreign-dominated and export-oriented production of the industry.

“Serious reforms are needed in the mining industry and these should start with the repeal of the Mining Act of 1995, which has been the main instrument of mining firms in exploiting our country’s rich mineral resources. We need a revenue-transparent and domestic-oriented mining production system, and the revenues should be utilized for the development of the communities and social services for the poor,” he said.

According to Clemente, the mining industry as it stands now is being fully exploited by foreign mining groups and their local partners at the devastating expense of the livelihood of Filipinos, the environment, and the future of the country. 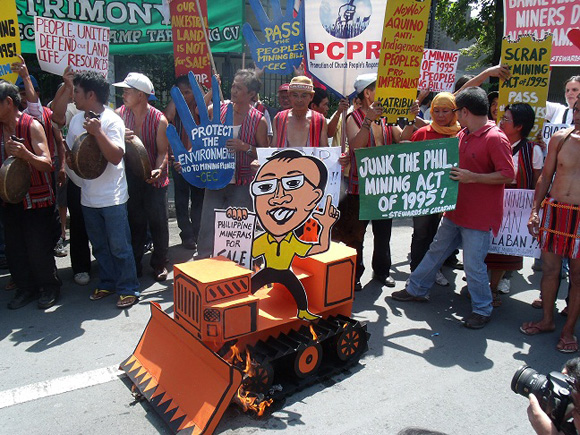 Members of environmental groups under anti-irresponsible mining alliance Defend Patrimony resist guards of the Sofitel Plaza Hotel as the latter try to push them away from the venue of the Mining Philippines 2011 Conference of the Chamber of Mines of the Philippines . The groups are demanding the repeal of the Mining Act of 1995 and the enactment of a pro-people mining law. (Photos by Ina Alleco R. Silverio / bulatlat.com) 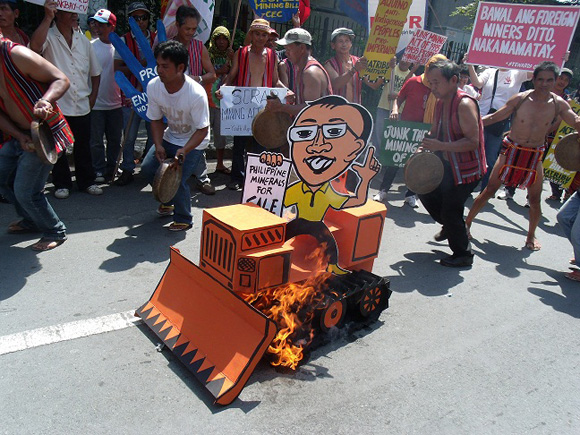 “For instance, because of widespread corruption and non-transparency in the industry, mining companies do not report the extent of their operations and under report their production to evade taxes and short change the government,” he said.

In the meantime, reports have it that the industry continues to make mining corporations wealthy.
The production value of the metal sector increased to P63.92 billion (US$148,837 million) in the first semester, this from P48.73 billion (US$113,953 million) during the same period last year. The gold subsector yielded the greatest production with two-thirds of total production coming from it. The subsector earned P42.18 billion (US$97,674 million).

The Philippines is one of the world’s most highly mineralized countries and ranks among the top five in copper and gold. Its deposits are key components of global mineral resources.

According to reports, the country has untapped mineral wealth of more than $840 billion (US $19,534,83 billion), or ten times the gross domestic product and fifteen times the national debt as of 2005.