Protect God’s gift of the environment

Rev. Sol Villalon, the chairperson of the Promotion of Church Peoples’ Response lamented lamented that the Benigno Aquino III administration aids and abets the plunder of foreign mining corporations. 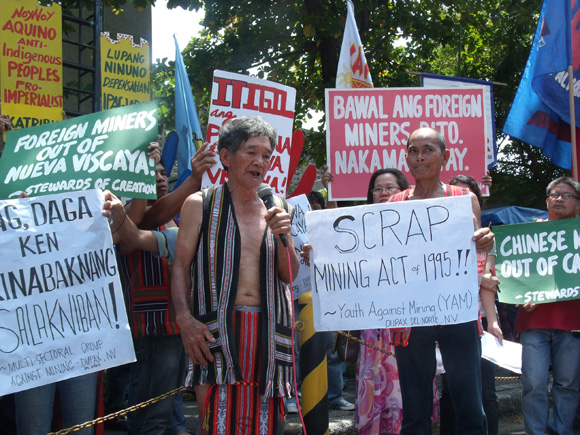 “It is not too much to ask that our resources be utilized for the benefit of the Filipino people, especially the poor who comprise the majority of the population. Many have lost their homes, many have been killed because of the destructive operations of mining companies — how long will we allow this to continue?,” she said.

The reverend said PCPR has formed “Stewards of Creation,” an alliance based in church and religious formations whose objective is to support calls for an end to irresponsible mining.

Fr. Florentino Daynos II of the St. Joseph Parish of Dupax del Norte said government officials should heed the call of their constituents against irresponsible mining.

“There are ways to progress that do not necessitate the destruction of lives and the environment. There are ways to development that will not require toxic wastes to be spilled into our streams, for hundreds of trees to be cut down, for homes of peace-loving Filipinos to be destroyed. Our government officials should listen to the calls of their constituents and do what is best for them, not what the mining firms want. All they want is to make millions at the agony of others,” he said.

More gold mining projects are being planned in Nueva Vizcaya. According to reports, one of the projects was the $150 million Runrufo project of the FCF Minerals Corp. It’s a local subsidiary of the the Australian firm Metals Exploration Plc and the project is slated to begin next year.

“Development” at the expense of the people

The protest was also attended by Indigenous peoples and fisherfolk from communities in Nueva Vizcaya and Cagayan, saying that irresponsible and destructive large-scale mining practices abounded in their areas.
Deacon Lawrence Amwao, chairman of the Multisectoral Group against Mining said indigenous peoples are among those most hit by the destructive operations of mining firms. They said residents of Nueva Vizcaya want an end to the mining operations in the region.

“Mining firms continue to operate there despite the opposition of the local government units and a recommendation from the Commission on Human Rights early this year to revoke their permits,” he said. “These firms and the government agencies that issue permits do not even consult residents and community leaders, but we’re the ones who are immediately affected. They encroach and take over our ancestral lands, destroy farmlands, uproot acres of trees, poison water sources and yet they still have the gall to insist that it’s all for the name of progress! Whose progress? Certainly not ours, certainly not the Philippines’,” he said.

Also in the protest were community members of the Yabbi town in Nueva Vizcaya, where Australian mining company Royalco Mining Incorporated operates. 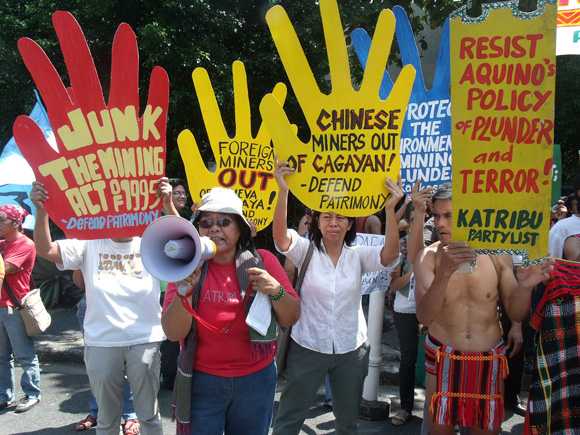 “Development can’t happen when there’s destruction of the environment; not when residents of the areas being plundered by mining firms are being driven out of communities and their ancestral lands. These companies are all lying — they care nothing about the welfare of people, nothing about the environment. They just want to extract all the riches and minerals that they can from the land and leave when there’s nothing left.”

According to KAMP, one million hectares of Philippine mineral lands are sold off to mining corporations, and 60 percent of these are ancestral territories.

Pia Malayao, Kamp spokesperson in the meantime expressed disgust over how President Aquino crowed over mining contracts set with Chinese mining investors during his State visit to China last August. Aquino said he expects more investments in the mining sector.

“Aquino should be ashamed. While Filipinos are being exploited, abused, and killed by mining corporations, he has the audacity to sell off more of our minerals,” she said.

The groups also decried the continuing magnetite mining operations by Chinese mining corporations across the river shores and coasts of Cagayan, despite opposition mounting directly from the communities and local governments.

The protesters also came prepared with alternatives to what they insisted is a mining policy that is anti-people. They said a proposal in the House of Representatives authored by Bayan Muna Representative Teddy Casinño House Bill 4315 or the People’s Mining Bill embodies the reforms that should be implemented in the mining industry.

The groups said the government’s policies on the ownership and management of the industry should be altered and reoriented toward national industrialization and local development. 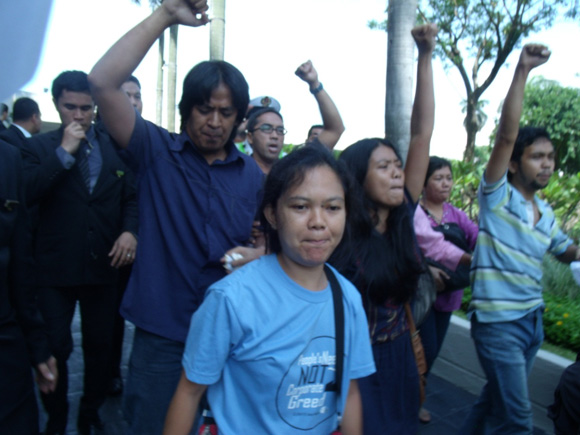 The scientists’ group Advocates of Science and Technology for the People or AGHAM said the pattern of foreign miners’ profiteering at the expense of the local economy would continue unless there’s a national industrialization plan in place.

Dr. Giovanni Tapang, national chairperson of Agham said a mining industry that is not responsible to the needs of the Filipino people would only contribute to the deepening of poverty and the chronic economic crisis.

“There is no debating over how mining gives a crucial contribution to any country’s economic development; given this, only through nationalization can the local mining industry be made to serve efforts toward building the economy. As it currently stands, the industry is export-oriented and import-dependent. This means that it puts the needs of the global market ahead of local needs, and the greed for profit takes precedence over developing communities where mining is conducted,” he said.

Feny Cosico, Agham spokesperson, said as an agricultural country, the Philippines would benefit much from mining activities if these were directed toward economic development efforts.

“The metals extracted from our mines can and should be used to build and develop agricultural tools and machinery for agriculture. Instead mining companies export these high-value mineral products on the one hand, and manufacturing firms import the same at a high cost. It’s a chaotic system that only serves to exacerbate our economic woes,” she said.

After the action at the conference opening, the groups led a caravan to to the offices of the National Commission on Indigenous Peoples and the Department of Environment and Natural Resources .