You Are Here: Home → 2011 → September → 20 → Threat of eviction during transport strike forced urban poor protesters out of support rallies

MANILA – For Rosalinda Sauro, 50, you do not have to be a driver to feel the effects of ceaseless oil price hikes. This president of a local chapter at Kapalaran Village, Quezon City, of the Gabriela Women’s Partylist (GWPa), said most people in their community are also complaining of increasing oil prices and the resulting price hikes of other commodities. It causes the rapid rise of cost of living when their incomes remain low. And coming also from a family whose male members are mostly working as drivers, she said she knows how hard it is for drivers to eke out a living. Her husband had also worked as one before he suffered a stroke six years ago.

Today, Rosalinda told Bulatlat.com that her son’s income as a provincial minimum-wage earning welder in the former naval base in Subic is their only source of support. She also sews and sells rags but their family’s combined earnings could barely support all of them. “My son receives a ‘provincial wage’ yet lives with high ‘city prices,’” she sighed. She prayed for a nationwide substantial, across-the-board wage hike. The GWPa in their area supported the transport strike by forming a secondary mass-up center near the SandiganBayan in Commonwealth.

For more than ten years now, the country’s progressive labor center has been pressing the government to substantially raise, across-the-board, workers’ wages, to no avail. 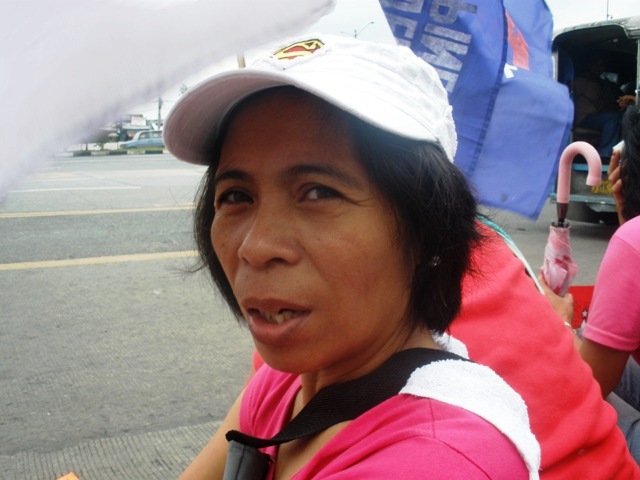 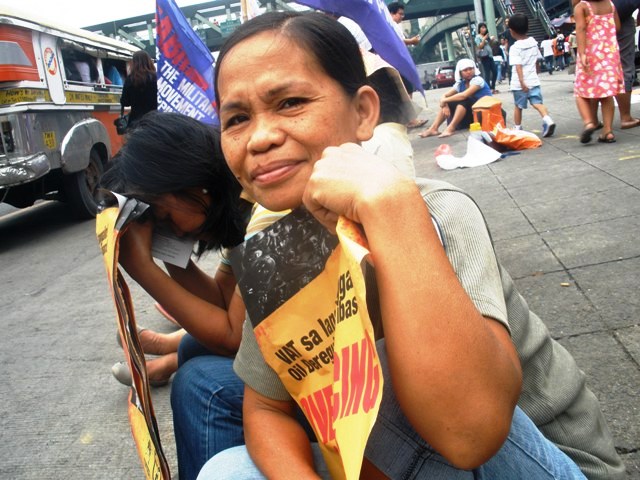 Another local GWPa leader, Jenny M. Casiano, 35, from Veterans Village in Quezon City, said their chapter supported the transport strike in the hope that protests like this could help mitigate the people’s poverty. “Ever since Noynoy Aquino began as president, the prices of oil and other important products and services have increased without letup,” said Jenny who is vice-chairwoman of Samakana-Gabriela from Veterans Village.

Jenny’s husband is unemployed. The country’s jobless has hit more than 7-percent under Aquino, despite its broad definition of the employed, according to the labor sector. “My husband is a victim of the Metro Manila Development Authority’s sidewalk clearing drives,” Jenny said, telling bulatlat.com that they sell tungsten rings on the sidewalk, but they lost their small capital after being “cleared” off the sidewalks so many times.

The Sept 29 regional transport strike and people’s protests is a struggle for the poor who are made poorer everyday by unmitigated, unexplained oil price hikes and VAT, said Lorie Banga, 52. She said she also joined the Sept 29 protests against oil overpricing because every day, her husband and four children commute and pay higher fares, thus lessening the budget on food and schooling. She said that in their community at View River in Quezon City, this is the same problem shared by majority of the residents who are construction workers and tricycle drivers.

To Carlito Badion, 43, vice-chairman of urban poor group Kadamay, the Sept 29 issues easily “totally unified” three community organizations in the Payatas area in Quezon City. As early as the first week of September, many Kadamay locals have been reportedly itching to support a transport strike. But Badion said their participation was limited by the government’s sudden decision to conduct land measurements in the areas covered by their organizations. 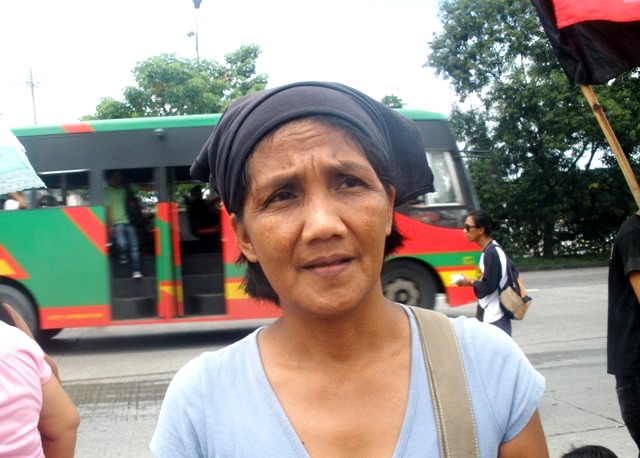 He said this happened both at the Payatas area and in the proposed central business district area. In Payatas, Rep Winnie Castelo called for measuring the lands up for community mortgage program, which the local chapter of Kadamay has been opposing. According to Ma. Teresa Jacob, 48, president of Sakopa (Community alliances in Payatas), Sept 29 transport strike supporters were suddenly forced to not attend protest rallies because they have to make sure their lots were not covered by the “bogus” community mortgage program land measurement by Castelo.

“There have been many cases where the poor are forced to cough up monthly amortization for their CMP, yet, when somebody suddenly claims the land where their shanties sit on, they still got demolished or threatened with eviction,” said Jacob.

Jacob is a single parent whose livelihood depends on sewing and selling rags with her children and sifting thrash at the dumpsite at night.
“The National Housing Authority also held an unscheduled land surveying at the proposed site of the Central Business District on Sept 29, prompting many would be strike supporters to delay going to mass-up centers and guard their shanties instead against possible demolition,” said Badion.

“It is our kids who got run over repeatedly by oil price hikes,” Jacob told Bulatlat.com. “If you are poor, you will find it harder to subsist on your meager earnings when oil prices, taxes and fares are hiked.” She said that is the reason why the urban poor are supportive of the transport strike.

She condemned the Aquino government for suddenly “measuring” their lands just when they were about to go to mass-up centers. “They have always been tricking us all,” Jacob said.