After decades of what they described as “agrarian reform programs designed to fail,” Filipino peasants continue to suffer from landlessness and worsening poverty.

MANILA – “It is us farmers who produce food for our country but we are forced to live in poverty and bear the brunt of the killing rampages by the military,” said Antonio Kasipas in Filipino, spokesman of UMALPAS Ka-Bikol, at the concluding program of the week-long, nationwide commemoration of peasant month last Friday at the Mendiola Bridge (now Chino Roces Bridge). His message was echoed in different speeches at other protest rallies in the Philippines where similar tales of peasant struggles, a major cause of unrest and armed struggle in the Philippines, were aired last week.

From Oct 19 to 21, farmers groups from different towns across the country converged and later camped out in front of regional offices of the Department of Agrarian Reform (DAR) and other government agencies. They marched, drove caravans and camped out together for “land, rights and social justice.” 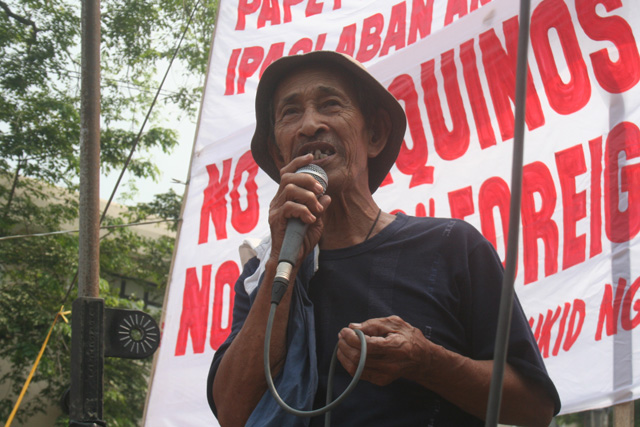 In Metro Manila, they dubbed their days-long protest as “Occupy Mendiola,” taking inspiration from the global “occupy” protest phenomenon. Farmers from Central Luzon and Southern Tagalog, later joined by farmers from the Bicol region, Cagayan Valley, Ilocos Sur and Cordillera, camped for three days at Mendiola Bridge (now Chino Roces). On the same bridge 24 years ago, they recalled how other fellow farmers demanding land reform were mowed down by government troops.

Before “occupying” Mendiola in this year’s commemoration of peasant month, the protesting farmers spent a day and a night in front of the Supreme Court in Manila, in protest of the high court’s decision last August that “favors the Cojuangco-Aquino families’ tightening of its control on the disputed Hacienda Luisita,” as the Kilusang Magbubukid ng Pilipinas (KMP) said in a statement. The peasant organization decried the Supreme Court decision as a “signal for big landlords everywhere to further take advantage of farmers all over the country.”

After decades of what they described as “agrarian reform programs designed to fail,” Filipino peasants have continued to suffer from landlessness and worsening poverty.

“CARPEr has not resolved the problem of millions of peasants of not owning the lands they till, driving many toward cities and urban centers in search of alternative sources of livelihood, and jobs,” said Gloria Arellano, secretary-general of Kalipunan ng Damayang Mahihirap (Kadamay), in a statement.

This, in turn, underscores the widespread poverty in the countryside, and the income divide, considering that “Three in every four Filipinos are either peasants or farm workers, while the biggest landlords such as the Cojuangcos and the Aquinos do not even make up one percent of the population,” said Joel Maglunsod, vice president of Anakpawis Partylist. He added that while “these hacienderos enjoy all the spoils of our peasants’ hard work, the peasants remain the most oppressed and impoverished among Filipinos.”

Based on various statements released by KMP chapters, Filipino farmers still struggle to hold on to the lands they or their ancestors have cleared and made productive, opposing, in the process, various cases and schemes of alleged landgrabbing instigated by expansion of plantations, land-use conversions into projects not covered by agrarian reform, and intense mining.

From these land issues all over the country arise the increasing number of human rights abuses. 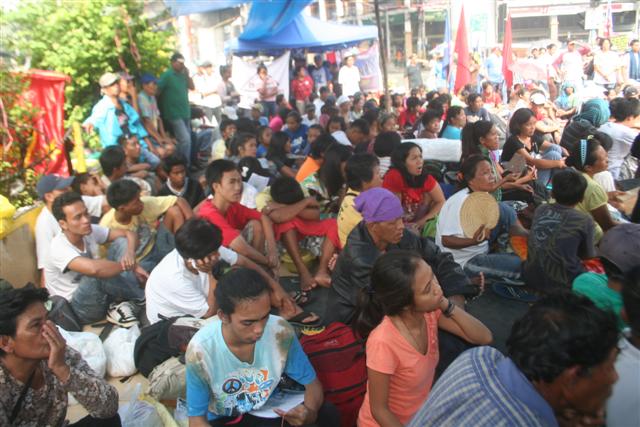 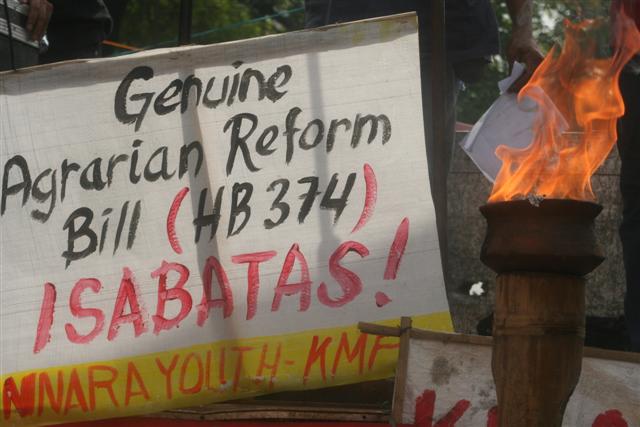 At the peasant rally in Mendiola, many speakers decried President Aquino’s decision to deploy more soldiers and train more paramilitary groups to be bankrolled by the mining companies for these companies’ protection. Mining has time and again been taking away vast tracts of lands and livelihood from farmers, indigenous peoples and fisherfolk.

The rallyists pointed to the case of Fr. Fausto Tentorio as one example of human rights violations afflicting those who opposed destructive mining.

The farmers’ resistance to mining and landgrabbing, and the government’s derided efforts to force them to swallow all these, result in human rights violations, as Kasipas of UMALPAS Ka-Bikol described as happening in the Bicol region.

Protesters also pointed to the peasant resistance as historically fueling the civil war in the Philippines.

War and bloody conflicts for land and its natural resources

Where mining permits are granted, and construction of special economic zones, as well as creation or expansion of plantations for export crops and biofuels are allowed by the government, farmers and indigenous groups invariably complain of being forcibly driven away from their lands, often with the aid of government troops. 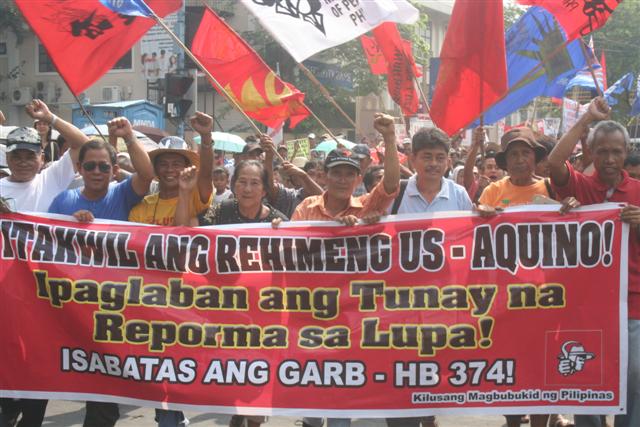 While the peasants were camped out at Mendiola, for example, the contingent from Central Luzon nearly rushed back to their villages as reports reached them that soldiers from military detachments at Hacienda Luisita were threatening to demolish their picket there.

At about the same time, in a village in Arakan, North Cotabato in Mindanao, human rights alliance Karapatan reported that 48 families were forced to flee their homes after some elements of the 57th and 38th Infantry Battalions of the Philippine Army, and the 10th Special Forces Airborne, killed a farmer, threatened, harassed, intimidated, and indiscriminately fired at his family and his neighbors, including a peasant leader. The soldiers reportedly harassed their victim to force him to “admit” he was a member of the New People’s Army (NPA), the armed wing of the Communist Party of the Philippines.