MANILA — Urban poor groups trooped to the government housing agency to protest the massive demolition of homes in North and East Triangle areas to give way to the Quezon City Central Business District project.

In a statement, Alyansa Kontra Demolition, an alliance of urban poor groups, said their protest action on Monday, October 24, and their overnight camp out to “occupy” the National Housing Authority is their way of condemning “the futility of the Aquino administration in addressing the housing needs of the people.”

“While it is clear that President Aquino signed a covenant with the urban poor that there would be no demolition of houses without a comprehensive relocation program, the NHA is speeding up the eviction of residents to cater to the needs of the low-cost housing developers,” the group said.

The group said they are challenging the NHA “to act on the massive demolition implemented by different LGUs and the housing agency itself, as in the case of San Roque where the NHA stands as the land claimant.”

According to the Alyansa Kontra Demolition, the NHA has acted as “broker of low-cost housing contracts” between urban poor dwellers and the government and big housing firms, true to President Benigno S. Aquino’ IIIs Public Private Partnership program. 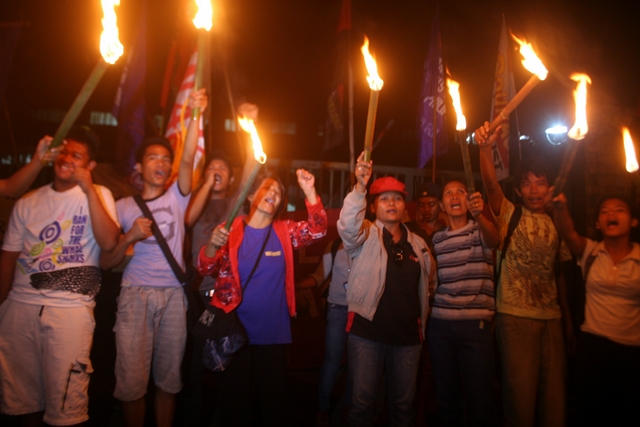 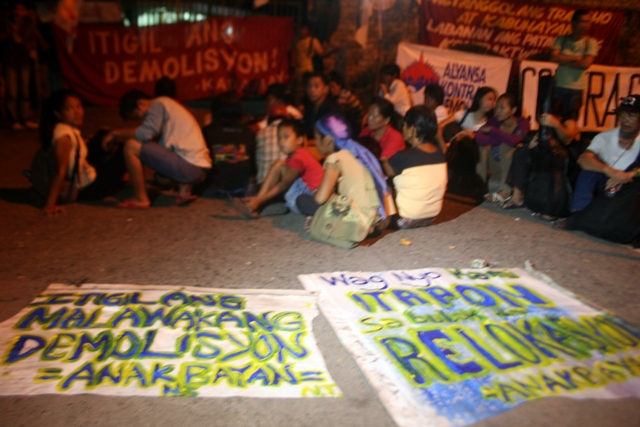 Protesters built a “slum house” in front of the NHA office along Elliptical Road in Quezon City to symbolize the agency’s failure to address the housing needs of the people and to protest against the privatization of housing services.

Housing as a business venture

“The government housing agencies and the private sector collude, to extract as much profits and kickbacks as possible from what is supposed to be a social service especially to the poor, making mass housing costly for poor informal settlers,” she said.

Anakpawis Partylist said private firms and public officials have used relocation projects as an “opportunity to engage in corruption,” adding that kickbacks and payoffs are extracted at almost every stage of the resettlement project.

“The very idea of eroding government involvement in the delivery of housing infrastructures and services, and encouragement of greater participation of the private sector will most like turn mass housing into a profit-making enterprise for big companies instead of providing service to the poor,” Anakpawis Rep. Rafael Mariano said.

For one, Mariano cited Jose Acuzar, whose two corporations namely New San Jose Builders and Goldenville Realty and Development Corporation as among the list of accredited housing firms in the Housing and Land Use Regulatory Board as of 2008. Acuzar, said Mariano, was previously involved in overpricing construction materials that were sold to the affected families of the Northrail Rehabilitation Program.

“This figure was not plucked out of thin air, but was reached after a careful review of targets, capabilities and resources,” Binay said in a speech on Friday, adding that this does not include the units that would be built using funds from private banks, non-government organizations, local government units, and private developers.

This, according to Kadamay, only signals more relocations of urban poor families from their communities.

“The lack of livelihood opportunities in the relocation sites has driven many relocated residents to sell their units and go back to their old communities,” Arellano said, adding that the meager financial assistance could only last for a few days.

“There would be no choice for the relocated but to come back to the urban center, where they can earn enough money to feed their families,” she said.

On October 27, residents of Sitio San Roque in North Triangle are once again facing a threat of eviction as the 60-day extension given by the NHA and the Quezon City local government expires.

Arellano said the residents do not want to be transferred to the relocation sites as their lives would be harsher. In a study conducted by the Center on Housing Rights and Evictions, an international organization based in Geneva, it said that living conditions in the relocation sites “are appalling due to lack of basic services such as potable water, electricity and sanitation facilities.”

While the Republic Act No. 7279, otherwise known as the Urban Development and Housing Act of 1992 (UDHA) supposedly sitpulates the rights of the urban poor dwellers, Kadamay said, it only “legitimizes demolition of urban poor communities as long as residents are given notices of eviction and a measly amount of financial assistance.”

Government employees, on the other hand, said they are also supporting the fight of the urban poor residents, especially those who would be affected by the Quezon City Central Business District project.

“We reiterate our demand to scrap the anti-people QC-CBD Project which aims to dislocate QC-based government offices and demolish urban poor communities in order to make way for a business venture that will only benefit multinational and foreign corporations. We call upon all concerned organizations and individuals to unite and struggle against the implementation of the QC-CBD Project,” CONTRA-CBD Alliance Lead Convenor Santiago Dasmariñas Jr, said, adding that the project manifests the “detrimental effects of the privatization of housing and other social services since it is a part of the administration’s PPP programs.

Dasmariñas said given the low wages of government employees and hospital workers, they will all the more encounter difficulties as they may be dislodged from their work with the implementation of the QCCBD.

“The government should allocate sufficient resources to support and improve the living conditions of the people, instead of abandoning social services at the hands of private profiteers and corporations. It is disappointing to see the Aquino administration repeating the anti-people policies of its predecessor,” Dasmariñas said. “There has been no change under the Aquino administration.”