MANILA – Filipino-Americans led by two alliances based in the United States of America belied the Aquino administration’s claims that human trafficking has ceased to be a problem in the Philippines. They held a rally against labor trafficking in front of the Philippine Consulate General office in mid-town Manhattan last October 21.

The National Alliance for Filipino Concerns (NAFCON) and the Bagong Alyansang Makabayan in the US (Bayan-USA) said the so-called improved ranking of the Philippines in the the US Watchlist of countries on Human Trafficking is both “deceptive” and “hypocritical” as aggressive labor trafficking operations from the Philippines to the US continue under the Aquino government.

Last June, the US State Department’s released its annual Trafficking in Persons Report wherein the Philippines’ status was said to have improved. Along with Singapore and Laos, the Philippines was taken off the list and the so-called Tier 2. Tier 2 is the category for countries which do not fully meet US standards on human trafficking but have been observed to be making efforts to do so.

The State Department, in its report, praised an “intensified effort” by the Philippines, saying that the country succeeded in convicting 25 trafficking offenders, compared with nine the previous year, including first-ever conviction for forced labor. 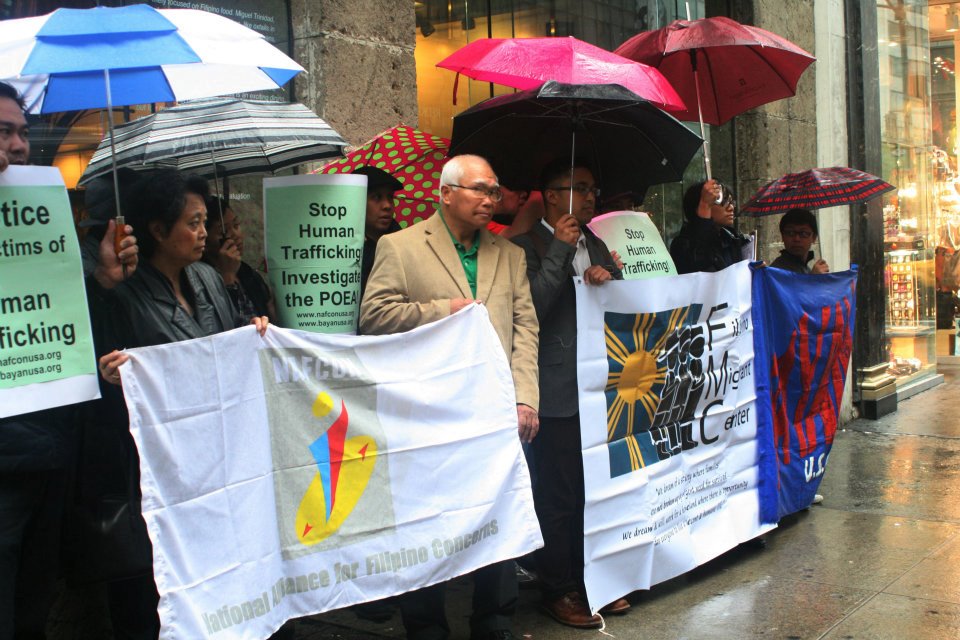 National Alliance for Filipino Concerns and the Bagong Alyansang Makabayan held a rally, October 21, against labor trafficking in front of the Philippine Consulate General office in mid-town Manhattan.(Photo courtesy by Bayan-USA / bulatlat.com)

According to reports, the issue of human trafficking is a sensitive one for Southeast Asian governments. Countries with human trafficking problems are threatened with a cutoff of US assistance if determined that it is not doing enough to stop trafficking. Indonesia and Cambodia stayed at Tier 2. Brunei, Malaysia, Thailand and Vietnam, however, remained on the watch list. The only Asian jurisdictions on Tier 1, meaning full compliance, were South Korea and Taiwan.

Malacañang immediately welcomed the upgrade and declared how US Secretary of State Hillary Clinton had previously declared confidence in the Aquino administration’s supported commitment to fight human trafficking.

In an interview with news network CNN, Clinton said about the Aquino government, “We didn’t really have the level of commitment we were seeking. We do now and we see a sea change of difference.”Clinton said that as many as 27 million men, women and children suffered from trafficking around the world for sexual exploitation or forced labor.

Presidential spokesman Edwin Lacierda said the government continues in its efforts “toward the abolition of human trafficking.”

US Ambassador Harry Thomas had earlier said that the Philippines risked losing P11 billion ($225.8 million) if it did not curb human trafficking.

Nafcon and Bayan-USA are calling for broad multi-ethnic cooperation and support to stop what they said was an “epidemic of labor trafficking” from developing countries, such as the Philippines, to the US. They said labor trafficking is a form of human trafficking and it should be stopped immediately.

Under the joint campaign initiative “Communities United Against Labor Trafficking” the two alliances called attention to the government-facilitated Labor Export Program (LEP) and the culpability of its agencies, among them the Philippine Overseas Employment Agency (POEA) which have dealings with foreign recruiters undertaking labor trafficking operations such as the US-based SentosaCare LLC.

In 2006, Nafcon led efforts in campaigning for the Sentosa 27+, a group of Filipino nurses and one physical therapist subjected to illegal recruitment from Manila to New York. Contracted in Manila by the Sentosa Recruitment Agency, the health workers were to work as staff nurses for SentosaCare-owned healthcare facilities in the US, while these facilities processed their H1-B or permit for employment visas.

Upon their arrival, however, representative of Sentosa informed the 27 that there was no longer work for them, and instead they were forced to accept work as agency nurses. As agency nurses, they faced workplace discrimination, abuse, lower wages and benefits, and wage theft. When they declared their right to resign, SentosaCare LLC filed charges of breach of contract against the health workers.

“What happened to the Sentosa nurses is unfortunately a common problem here in the US. But their inspiring example to fight for justice and to shutdown SentosaCare LLC has also inspired many other victims of labor trafficking to step forward and fight with massive community support,” states Mara Ibarra, Nafcon spokesperson.

In recent years, Nafcon and Bayan-USA also assisted Filipinos trafficked to the US as hotel workers. They helped in the cases of the Adman 11 in Los Angeles, the Florida 15 and the Arizona 34; all of these cases involved work visa scams in the H1-B and H2-B visa categories or long-term or contract-based employment visa categories.

The Florida 15 is a group of Filipino workers who were victimized by their Filipino employer, Jose Villanueva, who owns recruitment and employment company San Villa Ship Management Co. Earlier in July this year, they left their employer in Miami and sought the assistance of groups like Nafcon.

The Adman 11 were hired by Manila-based Adman Human Resource Placement and Promotions to work in Virginia, US for US$7.25 per hour, but they ended up working for a hotel in Mississippi for US$4.75 per cleaned room. They were forced to accept the terms because they left behind big debts in the Philippines and they had no money when they arrived in the US.

In the the cases of labor trafficking, employers withhold or refuse to issue proper immigration documents on time causing Filipino workers, who come to the US legally, to lose their legal status and become undocumented. As a result they are put in danger of being branded as “illegal” and are subject to unfair and inhumane treatment by US authorities. To date, more than one million Filipinos in the US are undocumented “tago nang tago” (TNT) meaning “always in hiding”) and are at risk of being detained, deported, and treated like criminals.

Berna Ellorin, Bayan-USA chairperson asserted that labor trafficking is not only a Filipino problem. “This is a problem of every underdeveloped country in the world with a government milking its overseas workers for remittances to prop up sinking economies they refuse to fix,” she said. 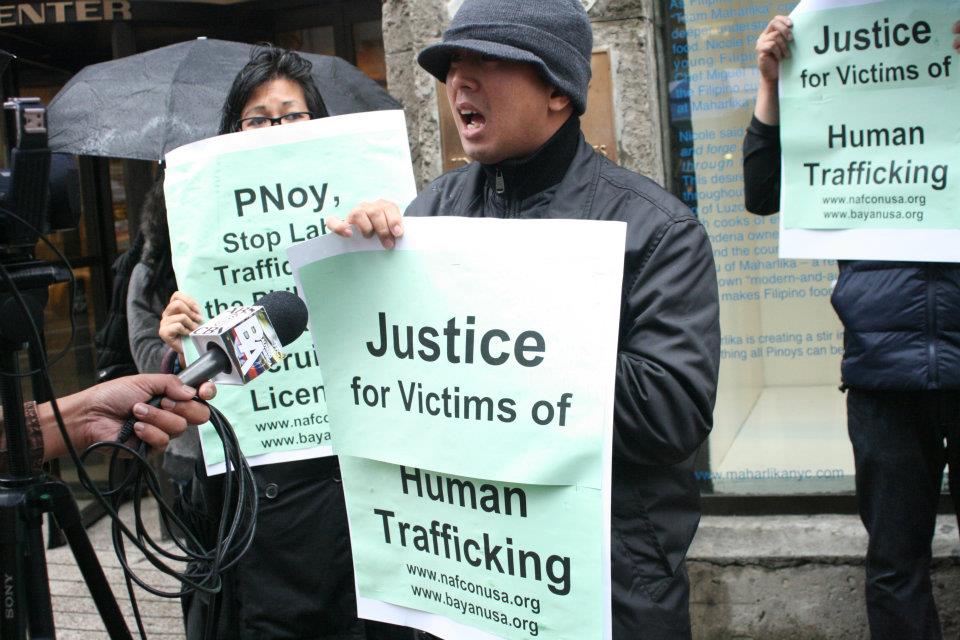 Ellorin said that in the case of the Philippines, President Aquino’s economic policies are to blame for human trafficking. “The government’s failure to eradicate deepening poverty and joblessness force Filipinos to seek work abroad and often fall into these labor trafficking schemes. At the same time, the Aquino government continues to allow traffickers like SentosaCare LLC maintain their recruitment licenses with the POEA despite public outcry.”

Ellorin dismissed the Aquino administration’s pride over the Philippines’ improved ranking from Tier 3 to Tier 2 on the US government’s Watchlist on Human Trafficking.

“The Philippine government is not doing anything to stop human trafficking, as this so-called Tier 2 ranking wants to claim. It is actually pushing it. In fact, the offices and departments of the LEP and their anomalous dealings with recruiters in work visa scams look more like one big human trafficking syndicate raking in profits for the Philippine government and these traffickers than anything else,” she pointed out.

Among Bayan-USA and Nafcon’s key demands is the complete shutdown of labor trafficking operations from the Philippines. The two alliances are calling for congressional investigations into the POEA, and the various agencies Filipino workers in the US are implicating in labor trafficking schemes, such as SentosaCare LLC.

The alliances also called for the the immediate release of public funds from the budgets of the Department of Foreign Affairs (DFA) and Overseas Worker Welfare Administration (OWWA) in the Philippines for legal defense and relief for Filipino victims of human trafficking to the US, many of who are forced into undocumented status because of work visa scams.