Calls for justice echo as Fr. Pops was laid to rest

“Tentorio was “a good priest, a fervent believer who for many years served the people of the Philippines in a courageous and indefatigable way.” Pope Benedict XVI

MANILA – Thousands of people mourning for the passing of Italian missionary Fr. Fausto Tentorio or Fr. Pops were in attendance as his body was laid to rest in Kidapawan City, North Cotabao on Tuesday, Oct. 25.In Manila, church and other groups also marched from España to Mendiola bridge wearing black shirts and red ribbons calling for justice for the slain priest.

On Oct. 17, Tentorio was killed outside his convent in Poblacion, Greenfields, Arakan Valley while preparing to go to a clergy meeting in Kidapawan City. According to news reports, Tentorio sustained ten gunshot wounds in the head and chest. Tentorio’s body was buried beside Fr. Tulio Favalli’s tomb.

Tentorio had been living in the country for almost three decades. He first arrived in the Philippines in 1978 and was later on assigned to North Cotabato in 1985. Since being assigned to North Cotabato in 1985, the Religious Discernment Group (RDG)said in a statement, Fr. Tentorio has taken to heart the joys, hopes, grieves and anxieties, particularly of the Monobos in the Arakan Valley. 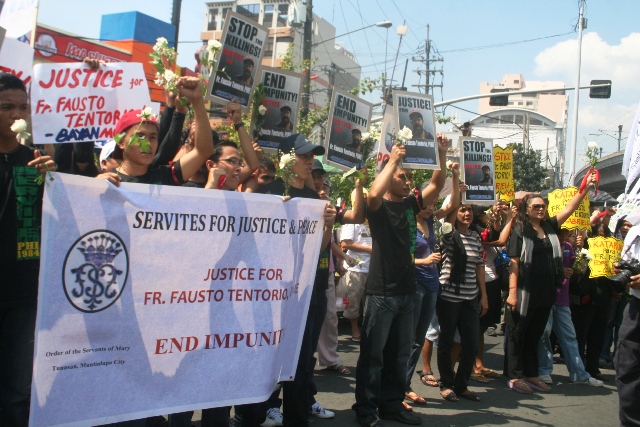 Seminarians from the Order of Servites joined the march for justice for Fr. Fausto Tentorio. (Photo by Anne Marxze D. Umil / Bulatlat.com)

RDG said that Tentorio provided the people of Arakan schools, day care, health services, sustainable agriculture and livelihood projects for this people whom he loved so much. “He was head of the Tribal Filipino Apostolate in the Diocese of Kidapawan. Fr. Fausto believed in community development to empower the people. He therefore questioned the so called “development projects” supported by the government and large foreign corporations, such as plantations and mining, seeing that these were not for the good of the people. He became a vocal critic in defending their rights and the integrity of mother earth,“ RDG added. 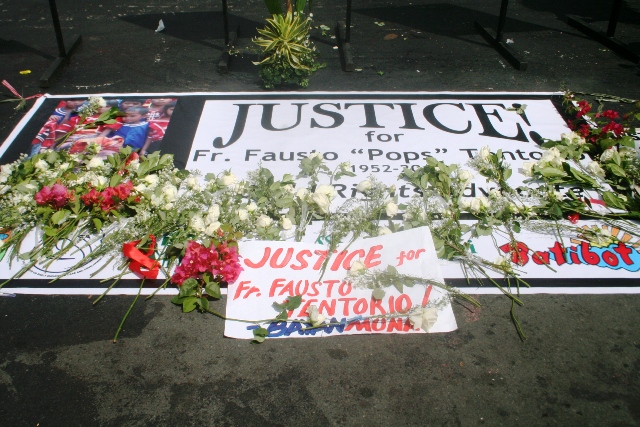 Tentorio has definitely touched the lives of the people in North Cotabato. As described by the RDG, Tentorio has lived the call of Vatican II, to make his own “the joys and the hopes, the grieves and the anxieties of the people of this age, especially those who are poor or in any way afflicted because, these too are the joys and hopes, the grieves and anxieties of the followers of Christ” (Church in the Modern World, No.1)

In a news article Pedro Gumano, a leader of Kilusang Magbubukid ng Pilipinas said, during a tribute for the slain priest, that Tentorio had always been the person the people in Arakan go to to ask for help. “From food , work, education, building daycare center, wedding of a daughter, hospitalization of a child, whatever it is, Pops always came to share his blessings.” Tentorio also provided water system and fixed the road for the people.

Tentorio also helped people in their struggle against development aggression and mining. “Fr. Tentorio was a staunch advocate against the entry of Xstrata’s open-pit mining in one of their areas of concern. This and the fact that he was already threatened by elements of the Bagani paramilitary group under the 73rd Infantry Brigade indicate the likelihood that mining and the military is behind the killings,” said Clemente Bautista, national coordinator of Kalikasan People’s Network for the Environment.

In 2003, Tentorio was threatened and has put been under surveillance by elements of the Bagani paramilitary group. But the incident never stopped Tentorio from helping the people. Tentorio also headed the Tribal Filipinos Apostolate of the Kidapawan diocese and protected the rights of the indigenous peoples of Arakan particularly the Manobos.

Tentorio was also a child rights advocate. He was the founding member of the Board of Trustees of child rights organization, Association for the Rights of Children on Southeast Asia (ARCSEA) focusing on projects concerning children of indigenous peoples from 2003 to 2005.

“Fr. Pops was very dedicated in pursuing the Early Childhood Care and Development in Arakan Valley, North Cotabato. Under his care, almost 30 day cares and literacy-numeracy programs and schools for the Lumads were built in response to the education needs of Lumad children,” said Melissa San Miguel, spokeswoman of of Salinlahi.

San Miguel added that Tentorio initiated trainings for Lumad para-teachers and tapped an organization that has expertise on nationalist, mass-oriented and scientific education which is the Parent’s Alternative on Early Childhood Care and Development Inc. (PAECCDI), a Salinlahi’s member organization. “Fr. Pops was one of the very diligent child rights advocate-priests who never tired of serving the children and the rest of the Lumads in the area. He provided what the government cannot provide: education for Lumad children. More than that, he gave the Lumads the dignity of a decent life that the government has consistently failed to do.”

San Miguel said the government should be thankful for people like Fr. Pops who served enthusiastically the oppressed people but instead, like other activists serving the poor and the oppressed, the military chose to silence him. “The sad truth in this kind of society is that whoever serves the oppressed are the ones who are being killed by state forces. And what was more frustrating is that instead of getting support from the government for his projects for children, these projects became objects of military violence.”

San Miguel stated cases of militarization of communities where progressive schools like The Blaan Literacy School and Learning Center in Malapatan, Sarangani are being attacked and tagged as “NPA school”.