Calls for justice echo as Fr. Pops was laid to rest 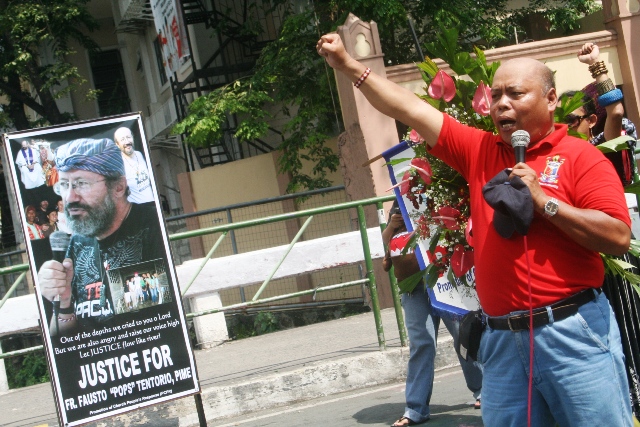 “We echo the cries for justice. We call for a fast, full and fair investigation of this terrible crime,” the People of Faith in Australia and Aotearoa New Zealand said in statement sent to Bulatlat.com.

The group also calls for the dismantling of militia units that have threatened the life of Tenorio since 2003 and claimed lives of several anti-mining indigenous peoples and human rights advocates since the Marcos dictatorship. “In his 30 years of mission among indigenous people, poor peasants and other disadvantaged sectors in Mindanao, Fr. Tentorio lived out true Christian discipleship. Witnessing injustice, poverty and rampant government neglect, he joined them in their fight to defend ancestral domain while setting up education and health programmes for the poor,” the group said.

Pope Benedict XVI also sent his condolences to those who loved Tentorio. “Tentorio was “a good priest, a fervent believer who for many years served the people of the Philippines in a courageous and indefatigable way.”

“The killing continues because no single perpetrator has been prosecuted since Gloria Macapagal Arroyo’s presidency,” said Fr. Dionito Cabillas. He said that there are evidences against the military but not a single one has been prosecuted. “Evidence points to Maj. Harry Baliaga for the abduction and disappearance of Jonas Burgos but he has not yet been prosecuted, Jovito Palparan was not prosecuted for the abduction Sherlyn Cadapan and Karen Empeño. Bishop Alberto Ramento’s murderers were put to jail but were about to be released because there is not enough evidence against them. The Aquino government never gives justice to the victims of human rights abuses, the perpetrators are still free.”

Cristina Palabay, convenor of End Impunity Alliance said the recent killing of Tentorio and Batoy is the result of Oplan Bayanihan policy of the Aquino government. “Maj. Gen. George Segovia, the man behind the detention and torture of the 43 health workers is now in Mindanao because the government said Davao, and the whole Southern Mindanao region is the new epicentre of the New People’s Army that is why the military intensifies their operation under Oplan Bayanihan.” Segovia is the Division Commander of 10th Infantry Division of the Philippine Army.

Meanwhile, Bagong Alayansang Makabayan (Bayan) secretary general said during the solidarity action in Mendiola that the people will look after the case of the slain priest. He added that the Department of Justice (DOJ) has put up a task force to get the assassin who killed the Italian priest. “We will not let the case of Fr. Pops be just one of the statistics of victims of extrajudicial killings. The perpetrators should be held accountable and be prosecuted. This is not the last action to call for justice for Fr. Pops. We will hold protest actions until Fr. Pops and several other victims of human rights abuses be given justice.”