You Are Here: Home → 2011 → November → 2 → On All Saints Day, activists call for justice for slain colleagues

On All Saints Day, activists call for justice for slain colleagues

DUMAGUETE CITY – Justice for slain colleagues and to all victims of human rights abuses.

This was the call of progressive groups in Dumaguete City as they gathered on the morning of All Saints Day, November 1, at the site where farmer activist Fermin Lorico was slain two years ago by an assassin.

“This is a reminder to the Aquino administration to give justice for the death of Nong Fermin and to all victims of extrajudicial killings),” Fabian Magallanes of Bagong Alyansang Makabayan (Bayan-Negros) said. 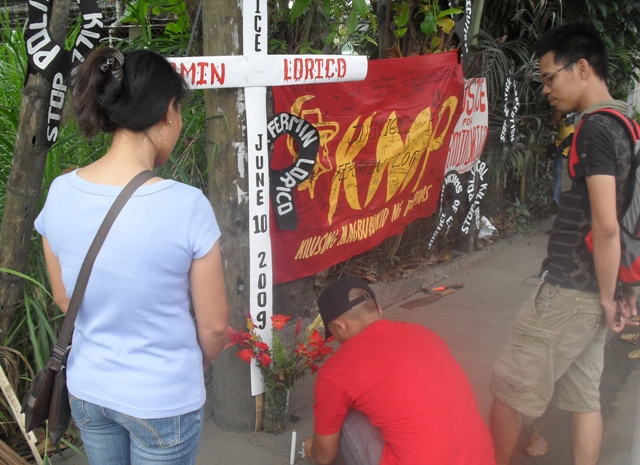 Members of progressive groups in Negros Oriental light candles in memory of Fermin Lorico and other victims of human rights abuse in the province.(Photo by Ritche T. Salgado / bulatlat.com)

More than two years after, the police has yet to come up with a suspect on the slaying of Lorico, according to Juliet Ragay of Babayeng Negrense Isulong ang Kalingkawasan (Banika-Amihan), a local group of peasant women.

Jose Luis Blanco of Karapatan-Negros revealed that despite the formation of Task Force Lorico months after the killing, there is still no progress on the case. He said that the formation of the task force was but a token act designed to make the police appear that they are doing something on the case. In reality, though, they have not done anything, Blanco said.

Blanco revealed that instead of the police investigating the case, the burden of coming up with a witness and evidence have instead been placed on their organization.

“The police are instead asking us to produce a witness, it’s as if we are the police,” he retorted.

“There’s no clear investigation, they did not even go to the houses near the crime scene,” he added.

Blanco pointed out that the police lack sincerity in solving cases of extrajudicial killings, citing another case – the murder of Rene Quirante, then deputy secretary general of Kaugmaon. 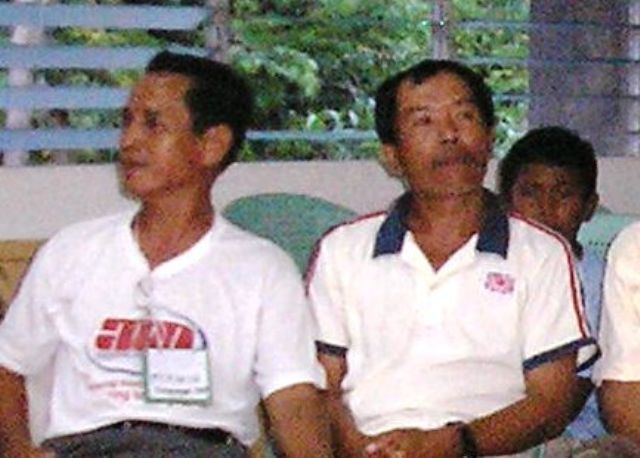 Quirante was beaten up and shot at close range by suspected members of the 11th Infantry Batallion of the Philippine Army on October 1, 2010 in Guihulngan, Negros Oriental.

Unknown to the family, a warrant of arrest was issued last February for a certain Lionel Librado, an alleged rebel returnee who has defected to the military. The warrant was never served to Librado, because apparently the police could not locate him. When the family knew of the warrant, they immediately went to the police station of Guihulngan City to pressure the latter to serve the warrant, but to no avail.

In April, during the hearing of a case against a non-govenrment organization (NGO) worker in Negros Occidental, Librado was presented by the military as a witness to attest the NGO worker’s involvement with the armed movement. Members of Karapatan and Kaugmaon-KMP informed the police, even giving them information as to where Librado could be located, but the only answer they could get from the police was that they were denied access by the military to enter their camp to accost Librado.

Blanco said that despite Aquino’s promise to resolve cases of extrajudicial killings, the murders of Lorico and Quirante, not to mention the hundreds of cases of human rights abuses, are yet to be solved.

From October 10, 2010 to September of this year, Karapatan have recorded 108 cases of human rights abuses in Negros Oriental, including one extrajudicial killing, three cases of torture, and 51 cases of threat, harassment, and intimidation.

Killings not deterrent but inspiration

However, despite all these killings and the apparent danger in their lives, Ragay said that their resolve to fight against state-instigated tyranny would continue. Rather than becoming a deterrent, the killing of Lorico and Quirante, she said, is an inspiration.

“His struggle for the people is the reason for his death,” she said.

“We will continue to fight the fight of Nong Fermin so that we would be able to show the people the worth of Nong Fermin’s life, especially now when justice is denied from his family,” she added.