“Children in conflict with the law should not be perceived as criminals because they are victims, victims who should be helped to correct his/her mistakes.” — Salinlahi Alliance for Children’s Concern

MANILA – In late 2008, Arnold (not his real name), then 17, was on his way home from a birthday party when a police mobile car stopped in front of him. The policemen stepped out of the vehicle and arrested him. A woman inside the police car accused him of robbery. He was detained at the Quezon City Police Station 6 together with other adult prisoners.

“I was detained for five days. Inside the jail, I was beaten up by other prisoners,” Arnold, now 20 years old, told Bulatlat.com in an interview. Although nothing was recovered from him by the police, he was still imprisoned. He was considered as one of the thousands of children in conflict with the law (CICL).

“It is absurd to judge the law as a failure when in fact it has not been implemented as it should be,” said Melissa San Miguel, spokeswoman of Salinlahi Alliance for Children’s Concern. “We are dismayed that one of the more progressive laws concerning the welfare of children is now being considered for amendments or even suspension,” San Miguel added. 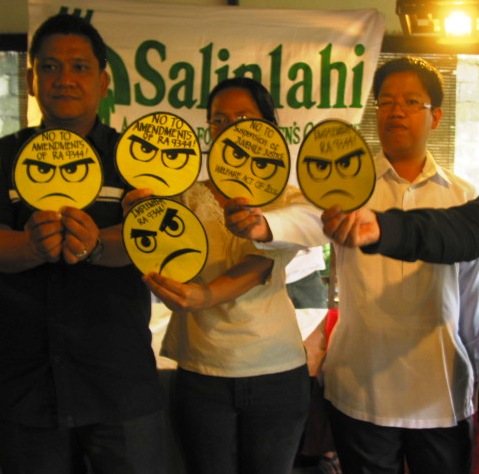 The Philippine Action for Youth Offenders (Payo) cited a 1997 study conducted by the Pamantasan ng Lungsod ng Maynila (PLM) in 1997 showing that the age of discernment of in-school Filipino children is 15 years old. Payo’s study conducted in 2002, meanwhile, revealed that the age of discernment of out-of-school Filipino children is 18 years old. In their position paper, Payo said these studies were the basis for setting the age of criminal responsibility in RA 9344 to 15 years old.

Jail is not a place for a child

Arnold was beaten up inside the jail, his throat was repeatedly hit that he almost lost his voice. “I could not speak. I thought I could not survive inside the jail. The place was so small, humid, smelled awful and the ration food was not even edible,” Arnold told Bulatlat.com.

Gerry Bernabe, secretary general of Payo said putting youth offenders in jail will only aggravate juvenile delinquency. “Justice system for children in conflict with the law should be different, they should not be included in a jail with adult prisoners. The Juvenile Justice Welfare Act is supposed to design a new set-up intended for the best interest of the child, however, the law is not being fully implemented,” Bernabe said.

In the same vein, Ma. Victoria S. Diaz of John J. Carroll Institute on Church and Social Issues said, “Jail is not a place for a child.” Diaz said putting youth offenders in prison will not resolve the root causes of juvenile delinquency. She added that the increasing number of juvenile delinquents only reflect the failure of the government to respond to these problems.

For Arnold, who was innocent but was imprisoned, a child who commits a crime should not be sent to jail. “It is not their fault, they did that because the government is not giving them what they needed,” said Arnold referring to education and job opportunities for parents.

Lawyer Rommel Alim Abitria of Humanitarian Legal Assistance Foundation (HLAF), a non-profit and non-government organization assisting indigent prisoners including CICL, pointed out that children should not undergo the same procedures as that of adult offenders. “Even adults who present themselves in court are frightened, how much more for a nine year old kid?”

Abitria said child offenders should not undergo the grueling procedures of the justice system in the country. “Here in the Philippines, one trial lasts up to four to five years on the average. And while the case is in court, the accused stays in jail together with other adult prisoners. This is not the system a delinquent child has to endure. Under RA 9344, children, 15 years old and below and whose age do not exceed 18 years old, should not be put in jail together with other adult prisoners. The child should be placed in a separate detention facility for only a short period.” Abitria explained.

Abitria also stressed the deplorable situation of prisoners in the country. “Prisoners here in our country are not treated humanely. In one prison cell where the capacity is only 20 prisoners, 100 prisoners are locked up. “

Arnold recalled his experience inside the jail where he had to sleep with his legs curled up because there were too many prisoners. “The cell was too small for 32 prisoners. It was really suffocating.”

While the RA 9344 states that all city and provincial government units must establish youth detention homes, it was never implemented.

Most child delinquents belong to poor families, Abitria said. “These minors are committing these crimes because of poverty – because they need to survive,” Abitria said, adding that ten percent of the crimes committed by minors are crimes against property like robbery.

From the data of the Juvenile Justice Welfare Council (JJWC), there were 4,706 cases of children in conflict with the law during the second quarter of 2009. Many of them were male ages 14 to 17 years old, mostly out of school youth and belong to poor families.

Because these minors belong to poor families, only a few of them can afford to post bail, Abitria added. A child who cannot post bail stays in prison with little chance to rebuild his/her future.

San Miguel said the government’s failure to address the deplorable situation of Filipino children – extreme poverty, hunger and lack of educational opportunities — make them vulnerable to involvement in crime and violence. “As of 2008, about 35 percent of children aged six to 11 and 54 percent of 12 to 15 year-olds are out of school youths. Their exposure to life in the streets makes them more accessible to criminal syndicate groups,” San Miguel said.