“We were informed that a demolition team would arrive in our community (last Nov. 28) to demolish the so-called illegal structures. But what surprised us was the big number of the demolition team who arrived with members of SWAT in full battle gear,” Sonia Talon, 45, a resident along BIR road, told Bulatlat.com. SWAT is short for Special Weapons and Tactics, an elite unit of the Philippine National Police.

Talon and her family have been living in their home along BIR road for 12 years now. They used to rent a small apartment in Fairview, Quezon City. But since her husband, Raymond, worked as a security guard at the office of Manila Water along Quezon Avenue, their family decided to move to BIR road.

Residents living along BIR road and the nearby communities such as the South and North Triangle are confronted with threats of demolition since former president Gloria Macapagal Arroyo signed into law the implementation of the Quezon City Central Business District, a 256-hectare project that would supposedly put Quezon City at the forefront of foreign investments. One of the biggest investors in the project include the Ayala Land Inc., a real estate giant that plans to develop 29.1 hectares in the area at an estimated cost of $500 million.

“There was a confrontation between our leaders and theirs. But violence erupted when the demolition team tried to dismantle the barricade. The people, of course, defended it,” Talon said.

In “reaction,” the police reportedly fired warning shots. But the residents believe that shots were directed at the community. 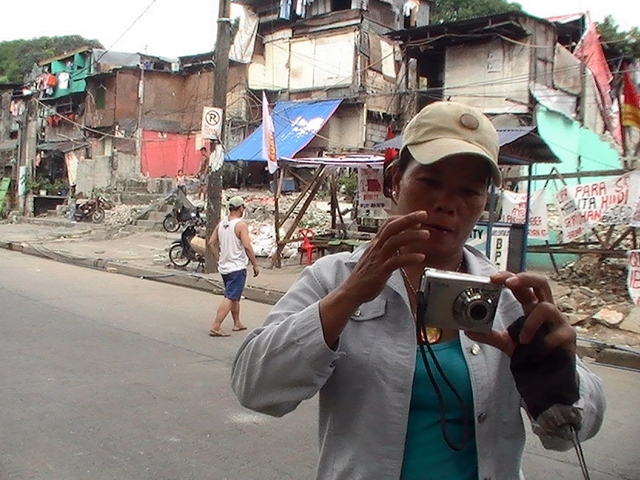 During the confrontation, Talon brought her son and his playmate into their house to make sure that they would be safe while she fought for their right to decent housing. Later on, however, she learned that her house was targeted. Small bullet holes could now be seen on the walls of her home.

“When I went back to check my son, I found two armed men in civilian clothes standing outside our home,” Talon said, adding that it might be the reason why her son and his playmate were crying when she came back for them.

So far, Talon said, her seven year old son does not manifest any sign that he was affected by the violence that transpired. “He was cheerful when he went to school this morning,” she added.

Talon said it was normal for them to be afraid. “We could be hit anytime. Who knows?” she told Bulatlat.com, “The only safety precaution we have now is to use a helmet.”

It is unfortunate, however, that Antonio Marinas, 62, was not wearing any headgear during their confrontation with the members of the demolition team. He was hit by a stone on the head.

Marinas is not from BIR road. He actually lives in an urban poor community along Scout Tuazon, which is also a target for demolition because of the local government’s road widening program. When asked why he was fighting with the residents living along BIR road, he told Bulatlat.com, “we are together in our fight against demolition.”

He added that the local government should not use their fellow urban poor, referring to the members of the demolition team, to destroy their homes. “They are like us. They are being paid to demolish our homes. And who knows when it would be their turn.” 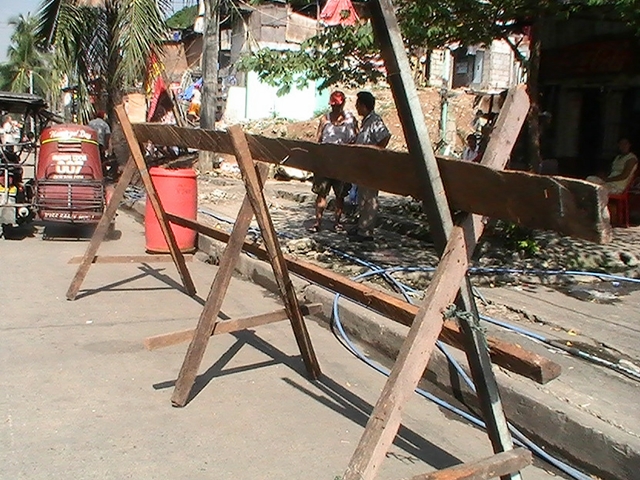 In a statement, the Concerned Organizations Opposed to Lay-offs, Transfers, Demolitions and Privatization due to the Quezon City Central Business District Project (Contra-CBD) said the demolition of homes “should be investigated and those responsible be brought to court. Human rights were obviously set aside and violated by the authorities.”

Patrick Ortasa, 33, was also “arrested, manhandled and jailed at the Station 10 of the Central Police District.” To date, he remains in jail without any case filed against him. Residents said the police have reportedly asked for the bullets that were recovered in the community in exchange for Ortasa’s freedom.

Ortasa’s only “fault,” urban poor leaders said, was that he rang an improvised bell with a hammer to alarm their community that the demolition team had arrived. He was accused of carrying an improvised shotgun or “sumpak.”

Courage national president Ferdie Gaite said that despite the confrontation and the reported pillbox that exploded nearby, the firing at the residents by the police could not be justified.

He added that stones are no match for bullets.

“The government do not treat its people as human beings. Animals would have been treated better. I do not even want to call their efforts as ‘relocation’ because it sounds sugarcoated. What they are doing is throwing away these people as if they are trash,” Gaite told Bulatlat.com.

Gaite said the government union has been helping the community in their fight. This is how, he added, government employees show their genuine service to the Filipino people. “We are not limited to our roles in government agencies unlike our government, whicf is playing a big part in privatizing our lands such as in the QCCBD.”

In the blueprint of the QCCBD, Gaite said, commercial – residential areas would be built along BIR road, adding that urban poor dwellers would definitely have no place in the project.

“They deem that development would happen if these people would be relocated. If so, for whose benefit?” Gaite said.

The government union leader reminded the National Housing Authority that their mandate is to provide homes for poor people. But so far, he said, twhat the government agency has been doing is to privatize the lands instead of providing social services.

Eduardo Villaluz, president of Barangay Central Neighborhood Association, said that in a dialogue with Quezon City Mayor Herbert Bautista on November 29, they were told that there would be a “ceasefire” between the local government and the residents of BIR road.

Villaluz said tthey would remain vigilant in barricading their homes despite the promise of the local government. “We would not be complacent. What they are doing to us is worse than a massacre. They are slowly killing us with fire raging our community and demolishing our homes.”

Contra-CBD said they would file a case before the Commission on Human Rights and push for a congressional inquiry on the demolition. Meanwhile, urban poor residents said they would continue to fight.

“This is why we oppose the proposed Quezon City Central Business District project. This is development that is definitely not for the poor but for the few businesses. Thousands of Quezon City residents are set to be left homeless to give way to malls, call center offices and condominiums,” Santi Dasmarinas, convenor of Contra-CBD, said.

Dasmarinas aded that they “vow to defend our life and homes amid the government’s hell bent efforts to push for the project.”