“The Aquino government must immediately respond to their just demands if he truly adheres to justice.” – Fe Salino, Selda-Southern Mindanao

MANILA – Ligaya Cruz, along with her husband Consensio and two of their children, went to Camp Crame, Dec. 3, to protest the continuing incarceration of her son, Eddie.

Eddie, a Dumagat leader was arrested on June 12, 2010 and is still detained at Camp Bagong Diwa in Quezon City for a crime Ligaya said her son did not commit.

Ligaya’s family came all the way from Wawa, Rizal to join the families and supporters of other political prisoners in a protest action in front of the national headquarters of the Philippine National Police (PNP). Later that day, they visited Eddie. It has been two months since they last saw him. “We don’t have money to travel more frequently to visit him,” Ligaya told Bulatlat.com. 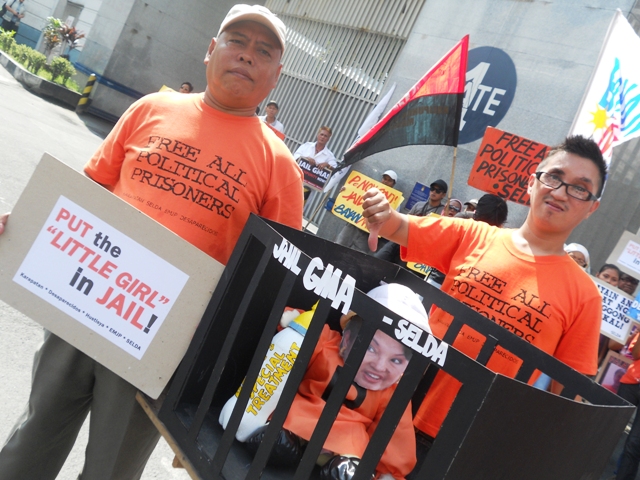 On the International Day of Solidaity for Political Prisoners, former political prisoners, relatives and supporters staged a protest in front of Camp Crame in Quezon City to demand the release of political prisoners while condemning the special treatment given to Gloria Macapagal Arroyo (Photo by Anne Marxze D. Umil / Bulatlat.com)

Former political prisoners, relatives and supporters also staged a protest action in front of Camp Crame, coinciding with the International Day of Solidarity for Political Prisoners.

Bayan Muna Rep. Teddy Casiño said in a statement, “It is ironic that Gloria Macapagal-Arroyo, the one responsible for so many human rights violations, is being given special treatment and even pampered by the Aquino administration while her victims have to go on a hunger strike just to air their demands that should and can readily be granted by the authorities.”

Since President Benigno S. Aquino III assumed presidency, this has been the third time that political prisoners went on fasting and/or hunger strike to demand for their immediate and unconditional release.

Other political prisoners detained in Cavite, Batangas, Laguna, Quezon and Rizal provincial jails have also been on hunger strike.

According to Selda-SMR, the 16 political prisoners were joined by 547 inmates on their hunger strike.

Detained artist Ericson Acosta is also on a hunger strike Calbayog, Samar, as well as political prisoners in PNP Custodial Center in Camp Crame and in National Bilibid Prison in Muntinlupa City.

“It’s a Filipino custom that once one family member suffers, the others suffer as well. We call on to the government to free all political prisoners so that no family will suffer anymore,” said Bishop Arthur Asi of the United Church of Christ in the Philippines Southern Luzon Jurisdiction.

In a statement, Selda-Southern Mindanao secretary general Fe Salino said the political prisoners and regular inmates demand the government to create more local courts to expedite the resolution of their cases, improve services for prisoners and medical care for elderly and sickly inmates. 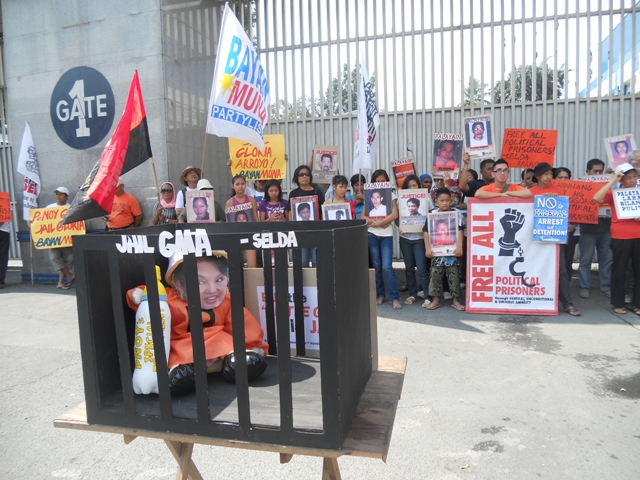 Iglesia Filipina Independiente (IFI) priest Fr. Dionito Cabillas said court hearings drag on for years, citing as example the case of Basilan 73 who were arrested after former president Gloria Macapagal-Arroyo declared a state of lawlessness in Basilan in July 2001. They were implicated in the series of attacks in Basilan and kidnappings. For a decade now, 43 of the Basilan 73 are still detained at the Camp Bagong Diwa, awaiting resolution of their cases. Cabillas said many of the Moro detainees were farmers and fishermen and not members of Abu Sayyaf, a kidnap-for-ransom group.

Cabillas recently visited the Basilan Provincial Jail where 30 Moro detainees were falsely accused of being members of Abu Sayyaf. Cabillas said only one judge attends to the many cases in the whole region of Autonomous Region in Muslim Mindanao.

“If the hearing will be postponed, the next hearing will be scheduled next year. How can political prisoners be released from jail in this kind of legal system in our country?” Cabillas said.

Cabillas said that in Bicutan, prisoners have to wait for nine years before the arraignment of their cases and more years for the hearing of a case.

“The Aquino government must immediately respond to their just demands if he truly adheres to justice”, Salino said.

For Ligaya’s family, until Eddie is released, difficult days are ahead. They will have to do without him, the only one old enough to help his father in farming.