“No Filipino goes out of the country with a death wish. Our 12 million overseas Filipino workers were compelled to leave the country to seek so-called greener pastures abroad in the absence of jobs, livelihood and decent living conditions in the Philippines.” – Garry Martinez, Migrante International

BUSTILLOS CHURCH, Manila — Shortly after noon, Vice President Jejomar Binay confirmed the execution in China of the 35-year-old Filipino who was sentenced to die for smuggling heroin. In front of Bustillos Church, a stone’s throw away from Mendiola, a moment of silence was offered to another victim of government neglect.

“I came here to extend my condolences to the family. I know how they are feeling right now. Seeing, touching your loved one and then after a few minutes, you see them lying down, cold and lifeless,” Basilisa Ordinario, mother of Sally Ordinario-Villanueva, a Filipino executed in China on March 30, told Bulatlat.com.

Ordinario said she knows how difficult it is to accept an execution of a loved one. She broke down in the middle of the campout dubbed “Kampuhan laban sa Krisis, Kaltas at Kahirapan” when Garry Martinez, chairperson of Migrante International, relayed the execution of the 35-year-old OFW in China.

“They need prayers so they could gather their strength,” Ordinario said. “Our government runs under a rotten system.” 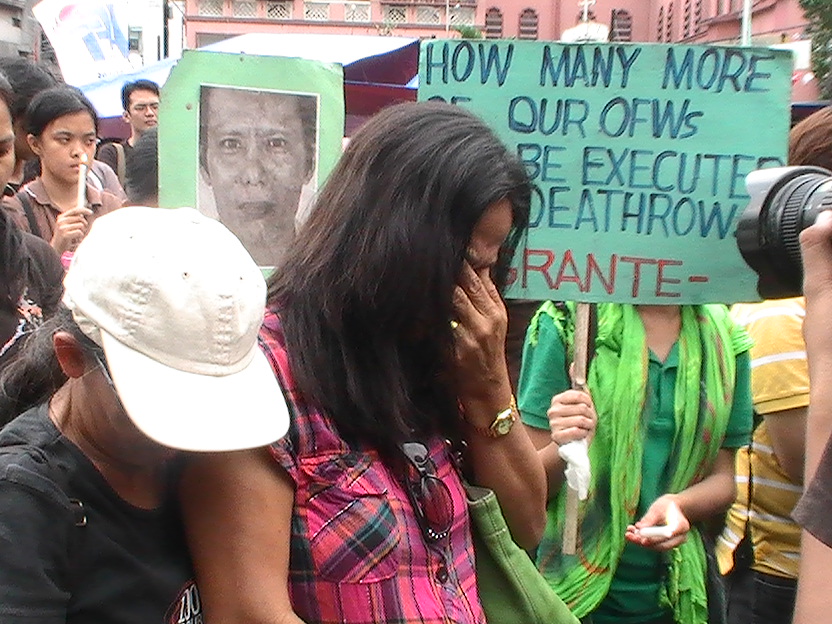 Basilisa Ordinario, mother of Sally Ordinario-Villanueva, breaks down during the moments of silence offered to the unidentified OFW executed in China on Dec. 8(Photo Janess Ann J. Ellao / Bulatlat.com)

Garry Martinez, chairperson of Migrante International, said the government should try telling the news to Mrs. Ordinario in person. Ordinario has not received any significant help from the government after Sally’s execution on March 30.

“The labor export policy has brought about deaths of OFWs,” Martinez said, “Even if we die abroad, they would not speak to protect our rights for fear of losing billions of dollars in remittances.”

The unidentified OFW was arrested for trying to smuggle in 1.495 kilos of heroin at the Guilin International Airport in China. Last November 28, the Philippine Consulate General in Guangzhou received a confirmation that the Supreme People’s Court has affirmed the lower court’s decision imposing the death sentence on the OFW. On Nov. 30, the DFA announced that the OFW would be executed.

The DFA stressed that the Filipino was not an overseas Filipino worker but entered China as a tourist. Consequently, on Dec. 3, the Philippine Drug Enforcement Agency said the Filipino was a “veteran drug mule,” receiving about $4,000 to $6,000 every operation.

As part of the last ditch efforts to save the life of the OFW, Department of Foreign Affairs spokesperson Raul Hernandez said President Benigno S. Aquino III wrote a letter to Chinese President Hu Jintao. He requested for the commutation of the death sentence to life imprisonment. The DFA, however, said on December 3 that China was unable to accommodate Vice President Jejomar Binay’s visit to Beijing to personally hand over the letter.

Binay had instead delivered the letter to the Chinese Embassy in Manila.

Two siblings and two cousins went to China on Dec. 6 to visit the Filipino before the execution. They met the unidentified OFW at around 8:30 a.m. of Dec. 8. The family, through the DFA, requested the media to respect their privacy.

The Filipino, despite protests of Amnesty International and migrants’ rights group, was executed by lethal injection at around 12:30 p.m. of December 8 in Liuzhou.

Aquino, through presidential spokesperson Edwin Lacierda, extended condolences to the family of the unidentified OFW.

Gabriela, the country’s largest women group, said the blood is now on the hands of the Aquino administration, criticizing the government for its late response to assist OFWs in distress. “There were many instances that Aquino met China President Hu Jintao when he visited the country recently. But he sent Binay to appeal for the life of the Filipino on the last minute. No wonder that they were not able to do anything,” Nere Guerrero, a member of Gabriela’s National Council, said in a statement. 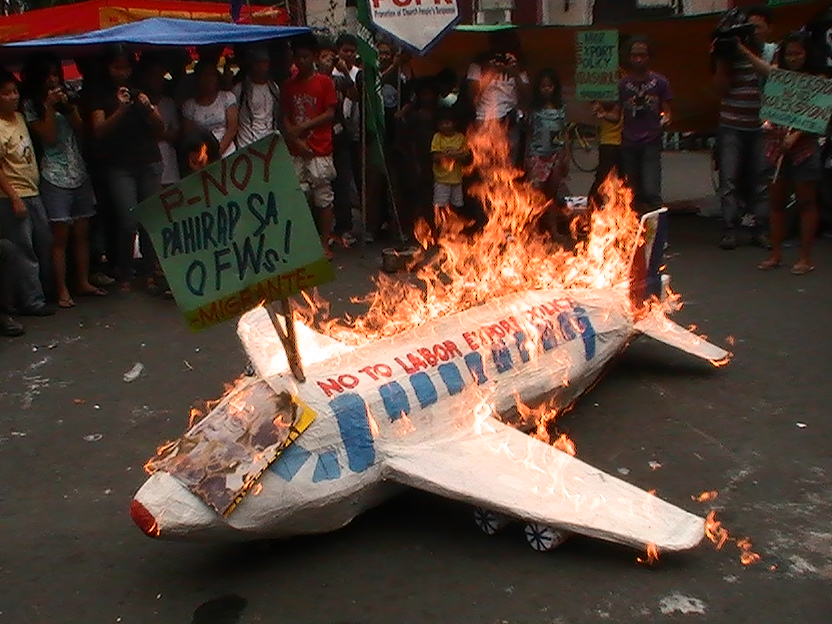 Martinez said OFWs and their families are tired of the same problems brought about by the labor export policy. “Sawang-sawa,” he stressed.

In an interview with Bulatlat.com, Martinez said that during the time of the execution of Sally Ordinario-Villanueva, Ramon Credo and Elizabeth Batain on March 30, the Philippine government already know that there are existing and pending cases of Filipinos sentenced to die for drug trafficking.

“They said that there are two cases of Filipinos sentenced to die that were commuted. But it is difficult to prove that due to our lack of resources, there is no way to confirm it,” Martinez said.

While PDEA promised to go after the recruiter of the unidentified OFW, Ordinario, mother of Sally, told Bulatlat.com in an earlier interview that no significant progress has been made to go after Tita Cacayan, Sally’s recruiter. The last time she heard about Cacayan, Ordinario said, she was supposedly under the custody of the National Bureau of Investigation serving as a cook.

Their family also did not receive any livelihood program, as promised to them during the height of media coverage of Ordinario’s execution.

“I am very angry that another OFW has suffered this fate,” Ordinario said.

With another execution of a fellow Filipino, Migrante International called on Filipinos abroad to support their call for a Zero Remittance Day on Dec. 18, the International Migrants Day.

Martinez said the zero remittance day would serve as a warning to the Aquino administration on the “present predicament of OFWs and families that have gone from bad to worse. The Aquino government’s actions and overall economic and political programs continue to view our OFWs as cheap commodities for export and means to earn remittances while offering them nothing in return, especially in times of need.”

Migrante International and its chapters abroad, especially in the Middle East, have long criticized the government for its slow response in assisting OFWs in distress. For one, many OFWs languishing in jail in the Middle East were not given legal assistance during their court hearings.

Martinez reminded the Aquino administration that the main reason why Filipinos work abroad is the widespread poverty ad unemployment.

“No Filipino goes out of the country with a death wish. Our 12 million overseas Filipino workers were compelled to leave the country to seek so-called greener pastures abroad in the absence of jobs, livelihood and decent living conditions in the Philippines,” Martinez said, “Unfortunately, the crisis of forced migration continues to be aggravated by the Aquino government’s promotion and advancement of a labor export policy that has become more systematic and sophisticated over the decades.”

“Our remittances serve as the only crucial weapon that OFWs have against the government,” Martinez told members of the press in an interview.