Palparan ordered by court to surrender

“If he is not guilty, why does he hide? He has to have the courage to face the truth.” – Mrs. Concepcion Empeño

MALOLOS, Bulacan – As long as retired Maj. Gen. Jovito Palparan Jr. remains at large, he could not seek relief from the court.

This was the decision of Judge Teodora Gonzales of the Bulacan Regional Trial Court Branch 14 in today’s hearing on the charges filed against Palparan and three other personnel of the Philippine Army in connection with the disappearance of two University of the Philippines (UP) students Karen Empeño and Sherlyn Cadapan.

Palparan, through his lawyer Narzal Mallares , filed an omnibus motion for preliminary investigation to quash the warrant of arrest and hold departure order issued against him for kidnapping and illegal detention charges.

“He has to surrender. The motion he filed cannot be acted upon,” Gonzales said during today’s hearing.

Members of the National Union of Peoples’ Lawyers (NUPL) who are serving as private prosecutors in the case welcomed the judge’s ruling. “He [Palparan] cannot have his cake and eat it too while trifling with the judicial and legal process,” the NUPL said in a text message.

Speaking to members of the media shortly after the hearing, Mrs. Erlinda Cadapan, mother of Sherlyn, said she was aghast that Palparan has not come out. 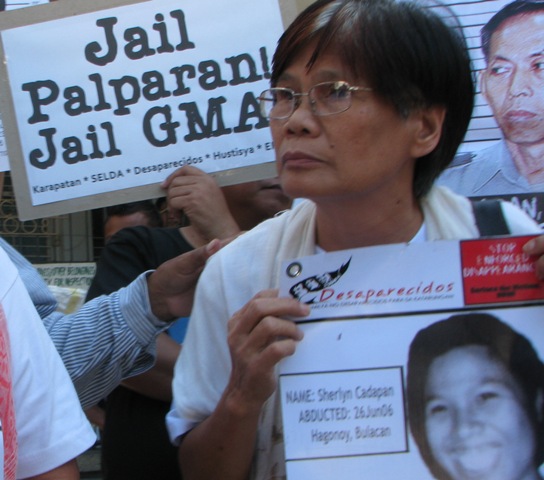 Top: Mrs. Erlinda Cadapan and Mrs. Concepcion Empeño call on retired Army Maj. Gen. Jovito Palparan Jr. to face them in court. The two mothers have been searching for their daughters for more than five years.(Photos by Ronalyn V. Olea / bulatlat.com)

“I was expecting to see him [in court] today to face the crimes he did but it’s the same, he continues to hide,” Mrs. Cadapan said.

Mrs. Cadapan and Mrs. Concepcion Empeño, mother of Karen, have been searching for their daughters since the two were abducted, along with farmer Manuel Merino, on June 26, 2006 in Hagonoy, Bulacan.

Mrs. Empeño reiterated the call for Palparan to come out. “If he is not guilty, why does he hide? He has to have the courage to face the truth.”

Asked about the whereabouts of Palparan, Mallares said he has not communicated with his client the past few days. “We discussed the advantages and disadvantages of coming out. He has the final decision. The general feels he is being attacked personally,” Mallares said.

Mallares also slammed public statements against Palparan. “If the case is already in court, they should stop issuing statements that are not true. He is still presumed innocent until proven guilty.”

“He [Palparan] remains confident that he would obtain justice. We must see the good things he did for the country as a courageous soldier. He only served the country. Accusations against him are mere speculations and without any basis,” Mallares said.

In their motion, Palparan, co-accused M/Sgt. Rizal Hilario, who is also still at large and S/Sgt. Edgardo Osorio said that their constitutional rights to due process of law were violated. They said that the offenses were not among the charges for which a preliminary investigation was conducted by the Department of Justice (DOJ) panel of prosecutors.

In a comment-opposition, the DOJ panel argued that the motion should be denied for lack of merit. The public prosecutors said they are not bound by the designation of the offense given by the complainants, the mothers of the victims.

“The truth of the matter is, accused Palparan, Hilario and Osorio responded to the acts being imputed to them, among other things those of abducting and detaining the victims. Their defense is basically one of denial,” the DOJ prosecutors said in their motion.

In its ex-parte urgent manifestation and motion, the Philippine Army cites executive order 106 issued by the late president Manuel L. Quezon and then Interior Sec. Elpidio Quirino in 1937 as legal basis for the transfer. The order stated that active military personnel facing court martial proceedings are held in such facilities.

In a motion for reconsideration, the DOJ panel said the Philippine Army has not shown how an ancient 1937 executive order superseded Rule 113 of the Revised Rules on Criminal Procedure. According to the rules, it shall be the duty of the arresting officer executing the warrant of arrest of the accused to deliver him to the nearest police station or jail without unnecessary delay.

Navera said the court and the prosecutors should have access to the place of detention of the accused. In their motion, the DOJ panel said the Philippine National Police (PNP) Custodial Center at Camp Crame is a civilian detention facility accessible to the court and “can more than adequately secure the accused.”

The mothers also demanded the immediate transfer of the two accused to a civilian facility.

“I remember when we were searching for Sherlyn, we were denied access [to Fort Bonifacio]. We, civilians, cannot enter that facility and they keep the two soldiers there. .. We were denied access then so how could we monitor if the two are indeed detained there or they are just happy staying there?” Mrs. Cadapan said.

Anotado and Osorio were present during the hearing, guarded by heavily armed soldiers.

“My body trembled due to anger upon the sight of the two soldiers. I was reminded how our daughters suffered in their hands, based on the testimonies of witnesses. I cannot forgive them,” Mrs. Cadapan said.

Meanwhile, the private prosecutors said of the transfer, “It is essentially thumbing the nose against basic sense of fairness and decency.”