The Rev. Marie-Claud Manga, pastor at Saint-Jean-sur-Richeliu, told the Philippine press in Manila that they would engage the general council of the United Church of Christ in Canada to bring these mining-related human rights violations to the Canadian Parliament.

MANILA – “It is clear to us, people are afraid— with a good cause – of mining,” Rev. Dir. Bill Phipps, former head of UCCP Canada, said at a press conference last week. A retired minister and “lawyer in previous life,” he and his team of UCCP church members had just concluded a 10-day mission, dubbed as Beaconsfield Initiative, to the mining areas and mining-affected communities of the Cordillera. During their visit, they lived with, observed closely and talked to people from “all levels of society.”

The Cordillera region is one of the most heavily mined and deforested sites in the Philippines. Despite numerous reported occurrences of land subsidence and erosion that could be traced to years of digging and mining, a bigger chunk of the region has been covered by mining and exploration permits under the renewed push for mining liberalization by the Aquino government.

Rev. Phipps lives in Calgary, the so-called energy center of Canada. He has seen for himself the effects of extractive mining to communities, especially to indigenous peoples. He joined the UCCP’s Beaconsfield Initiative to the Philippines that also looked into how Canadian mining companies, which often claim they are “going green,” are truly operating. When they return to Canada, he promised to disseminate their findings to their church members and fellow citizens of Canada and to push for changes in the way the Canadian mining companies do business and treat the mining-affected communities.

Canada is a mining country, noted Phipps. He estimated that as much as 75-percent of mining companies operating abroad have Canadian stakes. Though mining is touted to help economic development, he said, “We need to do it in a way that respects human rights, the environment, the livelihood, culture and the future of the people” living in the areas to be mined. 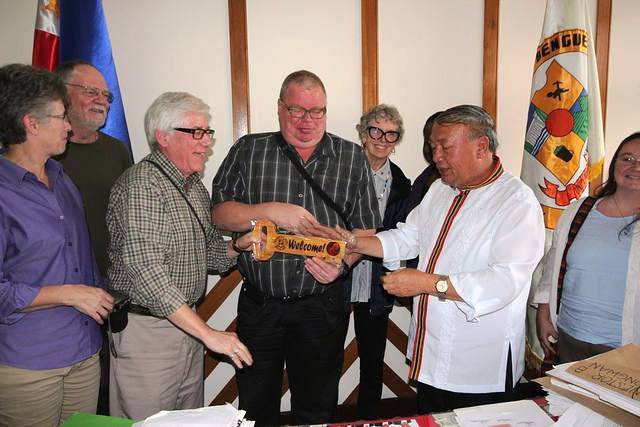 Beaconsfield Initiative meet with the governor of Benguet. (Photo by JR Guerrero/ bulatlat.com)

Their findings from their 10-day mission in the Cordillera revealed some serious violations of human rights traceable to the operations of mining companies. Though the members of the Beaconsfield Initiative admitted that they might have gotten only a small part of the picture, compared to the whole impact of mining to the Filipino people, they sounded confident that the data and information they gathered from Cordillera are clear, focused and detailed after the days they spent listening, observing, and “trying to understand” the issues of mining and its repercussions, as experienced by “all levels of society,” in the mining-affected areas of the Cordillera.

On their own, communities including the indigenous peoples of the Cordillera are living freely and healthy in their ancestral domains, the members of the Beaconsfield Initiative reported. “They have their own sources of livelihood from indigenous farming, for example. The children live and laugh and play freely,” noted Rev. Phipps. But all these are threatened by large-scale mining, he said.

“Mining will destroy land, natural resources, the people’s way of life. It devastates communities…. Why destroy healthy communities just to send profits abroad?” Rev. Phipps asked. He said the same destruction of indigenous peoples’ land has happened in the areas affected by mining in Canada. “People have rights to be afraid for their future,” he said.

But in response to the peoples’ fears and their resulting opposition to mining, the Philippine government has been deploying battalions of military into the mining-affected communities.

“Many people we’ve talked to reported the increased presence of military. The troops have embedded themselves in communities, in daycare centers, schools, village halls. They are sowing fear in the community,” reported Connie Sorio, a Filipino resident of Canada who is also a member of the Beaconsfield Initiative from Kairos-Canada.

The recent approval of President Benigno “Noynoy” Aquino III of the military’s proposal to let the mining companies hire paramilitary groups to protect their operation has reportedly compounded the people’s problems with militarization of their communities. In a talk with a military colonel during the mission, the Canadian UCCP members and their Filipino counterparts learned that the military has welcomed the presidential approval that would allow them to provide arms and trainings to paramilitary groups.

Sorio noted that the increased deployment of armed groups in mining-affected communities can only worsen the already “fragile issue in the Philippines of human rights violations.”

One of the impacts of this militarization for mining has been the sowing of terror in communities and vilification of peoples’ organizations and community leaders who resist mining, Sorio of Kairos reported.

During their mission, the Beaconsfield Initiative encountered a case of two citizens detained since September last year up to now without charges, “in total disrespect of the principle of the constitutionally-mandated right not to be detained without charges,” they said in a letter addressed to President Aquino and Justice Secretary Leila de Lima.

“We are concerned about Mr Edward “Kiwet” Galao, 30, a farmer and resident of Concepcion village in Cervantes, Ilocos Sur, and Mr Hilario Bantew, 42, resident of Mankayan, Benguet.” Both came from the indigenous peoples group.

“It appears that they have both been illegally arrested by soldiers from the 50th Infantry Battalion of the Armed Forces of the Philippines, under PSI Simplicio Rabago,” the Beaconsfield Initiative said. They found out that even if the AFP had filed a complaint of illegal possession of firearms against the two farmers, accusing them also of being members of the communist armed group New People’s Army, the prosecutor has not acted on any of these and no formal charges have been filed.

The illegal detention of the said two members of the indigenous peoples in Cordillera is a “concrete example of how military and paramilitary action and the police infringe on the rights of ordinary citizens,” said Rev. Patricia Lisson, a member of the Beaconsfield Initiative and director of St. Columba House in Montreal Presbytery.

Rev. Lisson asked why cases of illegal detention such as what they saw for themselves are still happening, when funds for the training of the Philippine military on respect of human rights had been given to the Philippine government. “We wonder if the money is being used for such training and, if they had been trained to respect human rights, we wonder if that’s happening,” said Lisson.

Protesting as a matter of responsibility, obligation

Some elders in the mining-affected communities of the Cordillera have impressed the members of the Beaconsfield Initiative when they told the Canadian church members’ mission that “for the sake of the young generation, protesting (against the destruction of large-scale mining) is our responsibility.”

“Resisting large-scale mining is like the elders’ obligation,” Sorio found out during their mission. “Mining is not bringing them development. On the contrary it is destroying their livelihood and food security,” Sorio said.

Although the mining companies pay taxes to the local government, such as the P1.4 million ($32.5 thousand) received by the town of Mankayan in Benguet in the past quarter, what the community is left with in exchange for that is far more costly. It includes the dangerous land subsidence and imbalanced ecosystem, said Sorio.

For members of the Beaconsfield Initiative, it is their “obligation” to bring back to Canada the findings of their mission. The Rev. Marie-Claud Manga, pastor at Saint-Jean-sur-Richeliu, told the Philippine press in Manila that they would engage the general council of the United Church of Christ in Canada, which happens to be the largest Protestant Church in Canada, to bring these mining-related human rights violations to the Canadian Parliament.

“With increased awareness of the impact of mining, particularly that of Canadian mining companies, the public can push their governments and the mining companies to be accountable and to ensure that mining is not aggravating the worsening human rights and environmental situation” said Sorio.

“This is a beautiful country,” Rev Phipps said about the Philippines. “It is a land of beautiful people. We’ve been welcomed with fabulous hospitality, generosity. We hope this land will be preserved for the future generation,” he added.

A few days after wrapping up their Cordillera field mission, Sorio and other members of the Beaconsfield Initiative are set to proceed to Mindanao.

“We are concerned about the (Canadian mining company) TVI’s stance in response to people’s clamor against their mining operations in the area – which TVI directly and blatantly ignores,” Sorio said.