“After a year and a half in office, President Aquino should be delivering on his promise to end impunity for rights abuses.” – Human Rights Watch
“I think that the Philippine government knows what to do [but] we don’t see the will to stop the culture of impunity.” – Amnesty International

MANILA – International human rights watchdogs expressed dissatisfaction with the Aquino administration’s actions, or lack of it, in addressing impunity.

In its 2012 report on the Philippines, New York-based Human Rights Watch said “extrajudicial killings of leftist activists and petty criminals continue, with the government failing to acknowledge and address involvement by the security forces and local officials.”

Human Rights Watch said that since Aquino took office in June 2010, it has documented at least seven cases of extrajudicial killings and three enforced disappearances for which there is strong evidence of military involvement.

“After a year and a half in office, President Aquino should be delivering on his promise to end impunity for rights abuses,” said Elaine Pearson, deputy Asia director at Human Rights Watch. “His administration will ultimately be measured by what it achieves, not by his stated intentions.”

In a related development, Gary King of the Amnesty International Minneapolis, speaking in a press conference in Quezon City, said that “nothing much has changed” in the human rights situation in the country.

Citing the Amnesty International’s report on the first year of the Aquino administration, King said that other than the signing of the Rome Statute of the International Criminal Court, Aquino has done nothing. 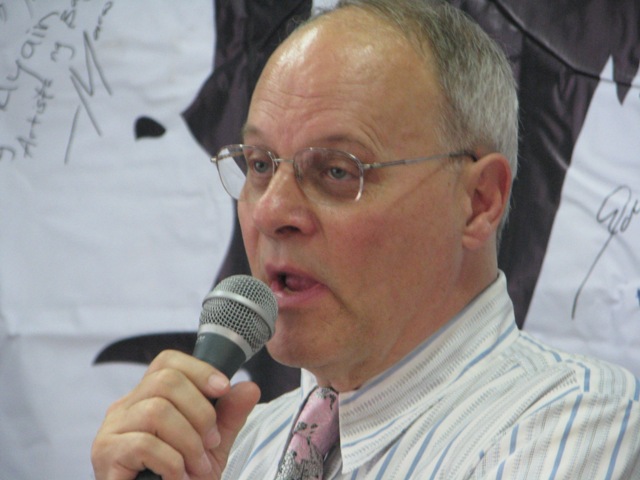 In a press conference in Quezon City, Jan. 23, Gary King of the Amnesty International says the Aquino administration is not doing enough to address impunity.(Photo by Ronalyn V. Olea / bulatlat.com)

“After a couple of years, we don’t see any progress,” King said. “I think that the Philippine government knows what to do [but] we don’t see the will to stop the culture of impunity.”

Human Rights Watch noted that the Aquino administration has not brought cases against military officers implicated in the disappearance of four activists Sherlyn Cadapan, Karen Empeño, Manuel Merino, and Jonas Burgos despite decisions of the Supreme Court and reports from the Commission on Human Rights (CHR) implicating state security forces.

The group said the families themselves have filed cases against the officers.

In May last year, the mothers of Sherlyn and Karen filed charges against retired Gen. Jovito Palparan Jr. and several of his men. After more than a month since the local court in Bulacan issued a warrant of arrest against Palparan, the retired general remains at large.

While the Justice and Interior departments have formed a “tracker team” to hunt down the fugitive general, Aquino should order the police and military to do more to arrest him, Human Rights Watch said.

The group noted that Palparan is the highest-ranking military officer to be charged for human rights abuses since the ouster of dictator Ferdinand Marcos in 1986. “Despite this unprecedented development, unlawful killings continue and the government should do more to hold those responsible to account,” Human Rights Watch said.

The group said only seven cases of extrajudicial killings have been successfully prosecuted in the past decade, none of which were in 2011.

“The arrest and prosecution of Palparan would be the most significant move against impunity for military abuses in the last decade,” Pearson said. “But the government should be more proactive in investigating killings and torture, arresting suspects, and vigorously prosecuting them.”

King of Amnesty International said that while a handful has been charged for extrajudicial killings and enforced disappearances, thousands have been victims of such abuses in the last ten years.

Human Rights Watch noted that while Aquino campaigned on promises to dismantle the “private armies” of politicians and wealthy landowners, he repeatedly defended the use of “poorly trained and abusive paramilitary forces to fight communist insurgents and Islamist armed groups in 2011.”

Aquino has not revoked Executive Order 546, which local officials cite to justify arming their personal forces. In October, in the aftermath of attacks by the New People’s Army against mining companies in Surigao, Aquino announced the deployment of additional paramilitary personnel to provide security to mining companies.

“It beggars belief why two years after the Maguindanao massacre, Aquino still has not dismantled the country’s paramilitary forces,” Pearson said. “Both government forces and armed rebels should ensure compliance with the laws of war and protect ordinary civilians, who bear the brunt of the conflict.”

The massacre on November 23, 2009 claimed the lives of 58 individuals, including more than 30 journalists. Members of the powerful Ampatuan clan, military, police, and paramilitary personnel are facing charges.

The group said that while Interior Secretary Jesse Robredo has claimed the Aquino administration has dismantled almost half of the private armies in the southern island of Mindanao, he has not presented any evidence.

“When you unleash private armies who have no training, you’re asking for trouble,” King said.

King said he hopes that with the international pressure, the Philippine government will do more to address the problem of impunity.