“No amount of political manipulation or attempt to project himself as a protagonist in the quest for justice against Arroyo could dispel the truth that he (President Aquino) continues the latter’s legacy of state terror through Oplan Bayanihan.” – Roneo Clamor, secretary general of Karapatan

MANILA – On the 63rd commemoration of the Universal Declaration of Human Rights, members of human rights group Karapatan and other organizations vowed to continue fighting counterinsurgency program Oplan Bayanihan of the administration of President Benigno S. Aquino III.

On Dec. 10, thousands of protesters, including youth and students who concluded their fifth day of their Occupy Mendiola campout marched from Blumentritt in Manila to Chino Roces Bridge (formerly Mendiola bridge). Despite the heavy downpour, the protesters continued marching and set foot on Chino Roces Bridge. 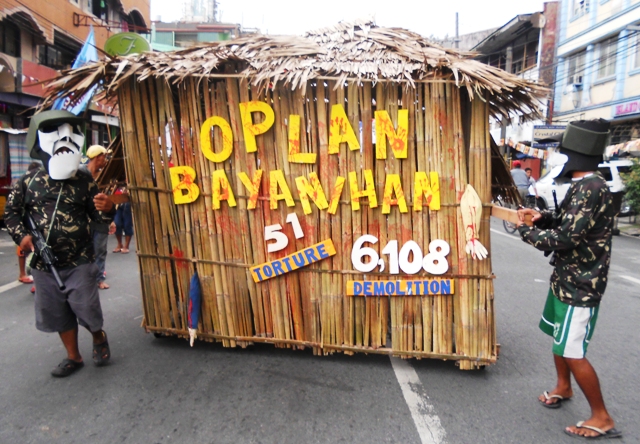 According to Karapatan, on the average, there is one extrajudicial killing per week.(Photo Anne Marxze D. Umil / Bulatlat.com)

Palabay noted that, on the average, there is one extrajudicial killing per week. According to Karapatan’s year-end report, more than 50 percent of the victims are from Bicol and Southern Tagalog. Six are women and 37 are activists or human rights defenders. More than 40 percent are peasants.

Karapatan said that while Oplan Bayanihan speaks of “peace and development,” it employs terror directed on the people through gross rights violations and intensified militarization of rural and urban communities.

“Peace and development of Oplan Bayanihan is nothing but a slogan. It is, in essence, the same Civilian Military Operation (CMO) that is implemented alongside intelligence and combat operations. The so-called development is nothing but palliatives and dole out projects. The deceptive tactics comes straight from the 2009 Counterinsurgency guide of the US,” the Karapatan year-end report stated.

From July 2010 to October 2011, Karapatan also documented 343 illegal arrests, 51 detainees tortured, 4,376 victims of forced evacuation and 6,108 went homeless through demolitions of urban poor communities. The group also documented 27 cases of frustrated killings, 135 illegal arrests and detention, 11,593 cases of threat/harassment/intimidation, 5,052 cases of indiscriminate firing and 10,577 cases of use of schools, medical, religious and other public places for military purpose, among others. 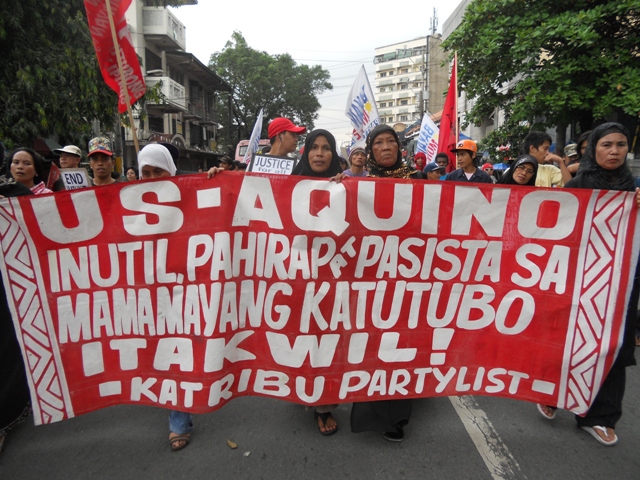 Speaking at the rally, Kakay Tolentino of Katribu said indigenous peoples are not spared from this counterinsurgency plan. “There are 151 indigenous people who are victims of extrajudicial killings under Arroyo and there are 13 more under the present administration,” Tolentino said. She said the massive militarization in the countryside protects mining companies and resulted to the increasing number of victims of human rights violations among indigenous peoples.

All over the country, Karapatan said, military operations victimize men and women among the workers, peasants, indigenous peoples, Moro people and those who assert their right to land and ancestral domain, and fight to protect the country’s natural resources from extractive industries such as mining.
Meanwhile, Roneo Clamor, secretary general of Karapatan, said, “Aquino conveniently uses President Gloria Macapagal-Arroyo as a shield by endlessly harping on her crimes and wrongdoings as a subterfuge to evade taking responsibility for human rights violations committed by his administration and its inability to solve any of the country’s basic problems.”

“No amount of political manipulation or attempt to project himself as a protagonist in the quest for justice against Arroyo can dispel the truth that he continues the latter’s legacy of state terror through Oplan Bayanihan,” Clamor said.

Arroyo is under hospital arrest at the Veterans Memorial Medical Center for charges of electoral sabotage.
The groups criticized the Aquino administration for not prosecuting Arroyo for its bloody human rights record.

“They said they would make Arroyo accountable? But how come she sleeps on a soft bed in an airconditioned room?” Palabay said in her speech. 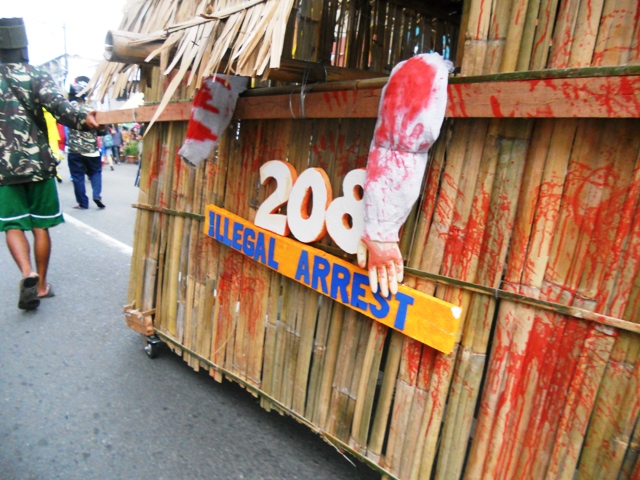 Lana Linaban, secretary general of Gabriela, said “Aquino, through its counterinsurgency program Oplan Bayanihan, and his economic policies that have pushed more and more Filipino families into poverty, has become a serial violator of the rights of the people.

“Everywhere in the country, women and their families are standing up for the right to fight poverty, landlessness and injustice because they have been denied their right to live free from poverty and indignity. But as they stand up for their rights, so does the government brandish its sword of rights violations and injustice. Aquino should do better than make an utter mockery of the people’s right to dissent,” Linaban added.

“The justness of our struggle is being proven by the viciousness of the attacks of the state,” Rey Casambre of the Philippine Peace Center said.

Casambre cited cases of political prisoners, especially the 13 National Democratic Front of the Philippines (NDFP) consultants who are languishing in jail with trumped-up charges.

“Despite the Joint Agreement on Safety and Immunity Guarantees (JASIG), the government still violates this agreement by arresting, abducting consultants of the peace panel. This only shows that the government is not sincere in peace negotiations,” Casambre said.

“As the old saying goes, “No matter how shrewd the monkey is, it could still be fooled. The peoples struggle will still prevail and this was proven when thousands of supporters marched to bury Fr. Tentorio. This was also witnessed in the tenacity in struggle of the youth and students who battled the suppression by the police who prohibited their campout protest here in Mendiola. The people’s movement continues to gain strength,” Palabay said.