“If it is false, it’s an insensitive and irresponsible claim designed to confuse and raise false hopes. It could be a cheap shot to incorrectly undermine the charges. But if true, which is good, it raises even more questions though.” – Edre Olalia, private prosecutor

MALOLOS CITY, Bulacan – After five years and a half of searching for her daughter, Erlinda Cadapan would have been overjoyed after being told that her dearest Sherlyn and companion Karen Empeño, the two missing University of the Philippines (UP) students, are still alive.

But the news came from one of the purported lawyers of retired Gen. Jovito Palparan Jr., the main suspect in the abduction of the two UP students.

Judge Teodora Gonzales said Santos’s statement is mere information not supported by facts. Santos replied, “If this information would be right, it’s the end [of the case].”

Surprised, one of the private prosecutors Edre Olalia stood up and said, “If the bare allegation is true, charges of kidnapping and serious illegal detention still hold…Assuming it is true, it would not in any way affect the case.”

Judge Gonzales told Santos, “Unless the victims are produced, the statement would not hold water.”

“It is difficult to take their words. What I want is the truth. If they know where Sherlyn is, why did they not surface her earlier? I have been searching for more than five years. They have been lying to us for so long. If it is true, why did they not bring my daughter and Karen to court?” Mrs. Cadapan said in an interview after the hearing.

Mrs. Cadapan noted that Santos did not provide the source of information and any details regarding the whereabouts of Karen and Sherlyn. 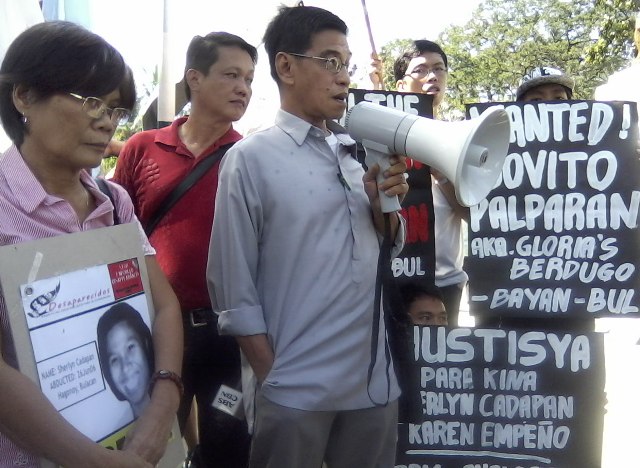 Laywer Julian Oliva Jr (on the megaphone) explains to supporters what transpired during the hearing. Mrs. Erlinda Cadapan, mother of missing UP student Sherlyn, listens.(Photo by Ronalyn V. Olea / bulatlat.com)

In his speech before a crowd of supporters, Julian Oliva Jr. of the National Union of Peoples’ Lawyers (NUPL), one of the private prosecutors said:,“If true [that the two are alive], it would be additional evidence [against Palparan]. If not, it is a blow against the families [of the disappeared].

In the same vein, Olalia said in a text message shortly after the hearing, “The bare and belated allegation of his purported co-counsel that the victims are still alive raised mixed feelings. If false, it’s an insensitive and irresponsible claim designed to confuse and raise false hopes. It could be a cheap shot to incorrectly undermine the charges. But if true, which is good, it raises even more questions though.”

State Prosecutor Juan Pedro Navera, head of the Department of Justice (DOJ) panel on the case, said, “We’d like to believe it is true but we have no basis.”

The Jesus Santos Law Office filed the motion for reconsideration on the court’s ruling that petitions filed by Palparan could not be acted upon until the court assumes jurisdiction over the suspect.

Palparan and another accused, Master Sgt. Rizal Hilario, remain at large 40 days after the issuance of warrants of arrest against them.

Oliva pointed out that there is no showing that the law office has been authorized by the accused to represent him.

Mallares, who appeared as counsel of Palaparan during the preliminary investigation hearings at the DOJ, said that Santos was duly authorized by the retired general. “Palparan told me over the phone, he contacted my phone, that he allows Santos,” Mallares told the court. 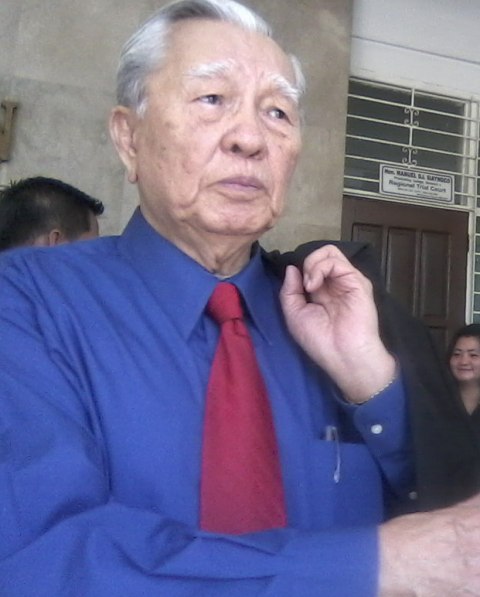 Santos said the general cannot be located and that they will submit an authoritization signed by the wife. To this, Navera reacted, “The family is not party to the case. Mallares could not authorize Santos.” He said that a written conformity must come from the retired general himself.

Navera also said that Mallares’s statement is self-serving. “We could not know whether it is true or not. He is treading the path of coddling a fugitive client or be charged with obstruction of justice,” Navera said.

Navera said the motion filed in behalf of Palparan should not be entertained by the court for lack of authority on the part of the lawyers.

In their comment-opposition to the motion filed by Palparan’s purported lawyers, state prosecutors and NUPL lawyers said that both the omnibus motion to quash the warrant of arrest and the hold departure order and the motion for reconsideration on the court’s recent ruling contain no undertaking from the counsel and more importantly from the accused whether they will surrender or submit to the court.

“To recall the warrants of arrest and the hold departure order, even as the accused continues to hide, is to ironically reward them for their unexplained and unjustified fugitiveness,” the prosecutors said.

Mrs. Cadapan called on the government to double its efforts in hunting down Palparan. “Other criminals are easily arrested. Palparan is known by the military and the police, why has he not been found after 40 days? Please hurry up,” Mrs. Cadapan said.

In her heart, Mrs. Cadapan believes her daughter is still alive. “Wherever they have been hiding you, please hold on. Stand by your principles that we are for the masses,” she said, hoping her message would reach her dearest Sherlyn.