Fugitive retired Gen. Jovito Palparan Jr. continues to evade public hearing on one of his crimes, even as he seeks sympathy by speaking via his topnotch lawyer.

Palparan is charged with kidnapping and serious illegal detention in relation to the disappearance of two students of the University of the Philippines Karen Empeno and Sherlyn Cadapan. The students, along with farmer Manuel Merino, were abducted in Hagonoy, Bulacan, on June 26, 2006.

After today’s hearing, Palparan’s lawyer, Jesus I. Santos, distributed to the media copies of Palparan’s statement. Santos’ representation of Palparan is under question by the prosecutors and the DOJ because when he turned up to lawyer for the fugitive Palparan, his authorization was signed not by Palparan himself but only by his wife. Santos also represented former First Gentleman Mike Arroyo.

Palparan and another accused, M/Sgt. Rizal Hilario, remain at large while two other accused, Col. Felipe Anotado and Staff Sgt. Edgardo Osorio, have been put under military custody.

“I am not a fugitive. The warrant that was issued for my arrest is illegal since it is a by-product of an improper preliminary investigation. This is a gross violation of the due process clause of the Constitution,” read Palparan’s statement which did not bear his signature.

The parents of the disappeared, Erlinda Cadapan, Concepcion Empeño and Oscar Empeño, all got furious after reading Palparan’s statement.

“Not a fugitive? Why doesn’t he come out, then?” Mrs. Cadapan asked. 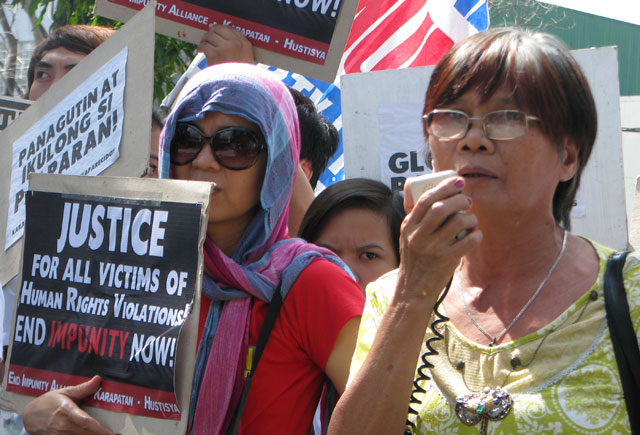 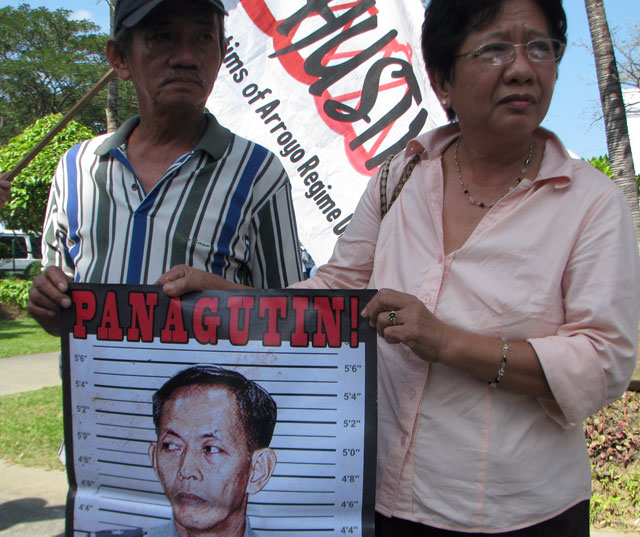 “What preliminary investigation? He denied this right to those he ordered arrested whom he suspected of being members of the NPA [New People’s Army]?” said Mr. Empeno.

Palparan claimed that all of the eight offenses filed against him had been dismissed. “However, the government clearly intends to pin me down…What I am pleading for is a chance for my side to be heard in the preliminary investigation to show that I am an innocent man, the same way I am innocent of the numerous charges imputed to me,” the statement read.

Mrs. Cadapan scoffed at Palparan’s claim of innocence. “Our witness is a victim himself (of Palparan). Palparan knows the truth,” Mrs. Cadapan said, referring to their important witness, Raymond Manalo, who testified in court that the two UP students were tortured inside military camps and safe houses.

“I have spent almost half of my life in service of our country. I have risked the future of my family defending the rights of our people who were harassed, maimed and killed by the enemies of the state. My entire service as a soldier was never tainted even by a hint of corruption or dishonesty…Do I deserve this kind of persecution,” Palparan asked in his statement.

Palparan’s lawyer Narzall Mallares has earlier filed an omnibus motion for preliminary investigation and seeking to quash the warrant of arrest and hold departure order.

During the first hearing on January 3, Judge Teodora Gonzales of the Bulacan Regional Trial Court Branch 14 said Palparan could not seek any relief from the court unless he surrenders.

Edre Olalia, secretary general of the National Union of Peoples’ Lawyers (NUPL) and one of the private prosecutors, said of Palparan’s statement, “He lives in a different world. He refuses to accept the reality. He portrays himself as the victim of injustice when in fact he has committed a lot of injustice to many victims [of human rights violations].”

Olalia belied Palparan’s claim that all the charges filed against him had all been dismissed, saying that Palparan is also facing administrative and criminal charges before the Ombudsman. Olalia also cited the United Nations Human Rights Committee resolution on the murder of Eden Marcellana and Eddie Gumanoy stating that the Philippine government, particularly Palparan, is guilty of violating the right to life, right to liberty and security of persons and the rights of violated persons to effective remedies of the victims.

Marcellana and Gumanoy were found dead on April 22, 2003 after they, along with two others, were taken by armed men clad in bonnet. At the time, Palparan was the commanding officer of the 204th Infantry Battalion. Before the incident, Palparan had repeatedly tagged Marcellana in public as a member of the New People’s Army (NPA).

Mr. Empeño said the retired generals themselves have issued a statement supporting Palparan and the other charged military officers.

The two other accused — Anotado and Osorio — appeared in court today, wearing their Philippine Army uniforms. Heavily-armed soldiers escorted them.

Mrs. Empeño said, “It is as if they are proud of what they did— after the violence they inflicted on our daughters, they still remain as soldiers.”

“Why is the AFP protecting those sinful soldiers? We, the victims, never got any protection in our almost six years of quest for justice. They should be renamed as Hukbo ni Satanas (Army of Satan), for they protect the evil ones,” Mrs. Cadapan said in a speech after the hearing.

In their motion for reconsideration to the local court’s order that granted the transfer of Anotado and Osorio to military custody, the prosecutors argued that the two accused must be held in a civilian detention facility nearest to the court where their cases are being heard.

The inspection is scheduled on Feb. 10, Friday. After which, all motions are deemed for resolution.

In a related development, various organizations of foreign lawyers issued statements calling on the Aquino administration to intensify efforts in hunting down Palparan.

“There are prevalent doubts from the victims and their families whether the Aquino administration itself has in fact made any serious, systematic and concrete effort to initiate the effective and genuine investigation and prosecution of human rights violators of the past and the present. We hope several other victims will, on their own, persist to throw the book at Gen. Palparan and his kind for the most horrific rights violations,” said Liz Davies, chairwoman of the Haldane Society based in Great Britain.

In a letter addressed to Aquino, David Gespass, president of the US-based National Lawyers Guild, wrote, “We remind you that the international community is watching closely and demand that prosecution and punishment replace inaction. It is past the time for you to end the culture of impunity in the Philippines and place your administration on the right place in history.”