“I know that the government is spending so much on the impeachment case. But the government should not forget that there are also other people, mostly poor, who are in need.” – Zenaida Espiritu, vendor

MANILA — While Zenaida Espiritu, 49, was tending to the plastic bags she sells for a living along the busy stretch of Carriedo, she stops for a while to check on what was happening near the LRT station. A member of the women’s group Gabriela approaches her and, soon, she found herself signing a petition paper.

“I can hardly provide a decent meal to my children because of the continuing price hikes,” Espritu said, when asked why she decided to sign the petition paper.She has five children. Two are already married and one has stopped going to school. The two youngest are still studying, one in second year high school and the other in Grade 4.

Espiritu has been a vendor in Carriedo since she was 16 years old. She said her life became harder each passing year. Her capital for the products she is selling has increased through the years. “When I started selling these bags, I bought them for only $0.37. But now it increased to $0.46,” she said, “Then, people would ask for discounts.”

She goes home with only $2.79 after a day of hard work from 9:00 a.m. to 8:00 p.m. Her husband does not have a steady income as a construction worker. Their meager income, amid the increasing prices of staple goods and services, is not enough for her children. “That is why I signed the petition paper. I hope that my signature could reach our government and heed our call.”

Gabriela, the country’s largest women’s group, has launched Altrapresyo(n): Alerto sa Pagtaas ng Presyo Network, a consumers campaign network that aims to secure one million signature to repeal the oil deregulation law and the E-VAT on oil products and basic goods and services. The group aims to submit the petition before the House of Representatives to oblige the lawmakers to listen to their demands. 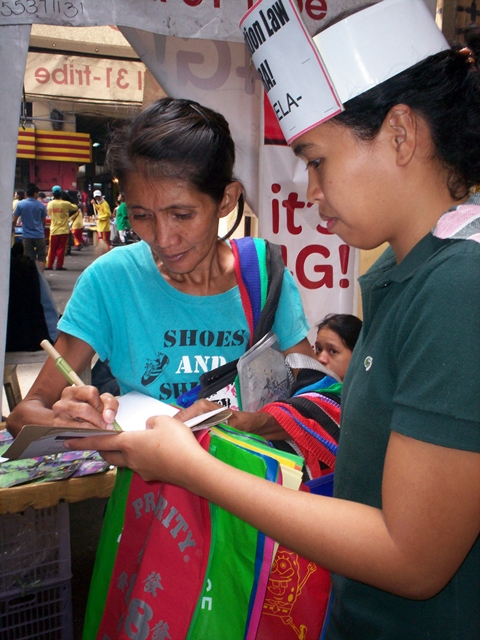 “If the Aquino government cannot do anything to address the consumers’ problems regarding the increasing prices of basic goods, women would do all possible means from protesting in the streets to the Congress,” Lana Linaban, secretary general of Gabriela, said, “We would call the attention of the Aquino government because our impoverished conditions and hunger would never be acceptable.”

Along with the petition signing, Gabriela also conducted a free blood pressure reading. It goes well with their campaign Altapresyon, which literally means high blood pressure.

Espritu said she often has high blood pressure whenever the increasing prices of staple food never seems to stop. “My children’s school supply, gas, sugar and rice,” she added, “Before I only spend $0.58 for a kilo of rice. But now I spend $0.88.”

Like Espritu, Teresa Conchas, 39, often has high blood pressure whenever she would notice an increase in prices. Conchas’s income as a vendor of a popular fermented milk drink is not enough to sustain her family’s needs. Her husband, too, has a meager income as a vendor.

Their family has recently migrated to Manila from the province of Nueva Ecija, hoping to find a better life for their family. But they hardly found what they were looking for. They were confronted with no decent work and impoverished living conditions. “What I just want is to provide my children a brighter future,” Espiritu said.

During the protest action and petition signing of Gabriela, Conchas had her blood pressure checked. “They said it is normal,” she told Bulatlat.com. The last time her blood pressure seemed to have increased was when she recently bought LPG.

“Before it was only around $6.98. Now it is already more expensive than our budget for food,” Conchas said. She added that, at times, her family is forced to use wood or coal for cooking.

The price of LPG has increased last week by a whopping P6.50 per kilo. According to news reports, the price has increased dramatically because, unlike the gasoline, its price does not increase often. But progressive groups like Gabriela protested against the increase.

Among the throng of women were a few men who were also lining up to sign the petition paper. Steve Freeman, 26, said the increasing prices of fuel and oil products continue to raise his blood pressure.

“Whenever the big oil corporations announce their increases, it is as if the government could not do anything about it,” Freeman said, “In most instances, there is hardly sufficient time to prepare the public for such increases.”

He said gasoline worth $3.49 was already enough to get to his office. But now he is spending some $6.98. Their income is sufficient for the needs of his family. But as his four children continue their schooling, he said, he is no longer sure whether they could still provide them with a good future.

“Right now my wife is entertaining the idea of working abroad, hoping that it could augment our income in the near future,” Freeman said.

According to Linaban, secretary general of Gabriela, the government should act on the continuing increases in prices of oil and staple food. She said in a statement that the government, through the Department of Energy, mostly acts as spokesperson for the oil companies.

“In any given time, Malacañang should have prioritized the repealing of the oil deregulation law. Instead, it simply allows oil companies to take home superprofits at the expense of the welfare of the people,” Linaban said.