“The public deserves to know what actually transpired during the deliberations of Arroyo’s petition for TRO. The Senate should oppose this grand cover up by the SC. It is frustrating that the Senate through its rulings has further narrowed the avenues for seeking the truth on Corona’s misdeeds.”

Meanwhile, lead public prosecutor for Article VII, Bayan Muna Rep. Neri Colmenares said the Feb.14 SC resolution is a “self serving tool to impunity and to hide the truth.”

In a statement Colmenares said, “The SC Valentine resolution is an affront to the power and duties of the impeachment court. It castrates the power of the impeachment court to look into the vital information, including confidential, material and relevant to crimes and impeachable offenses committed by the CJ or other impeachable members of the SC. The Impeachment Court should not allow an “internal rule” of the Supreme Court to cripple its constitutional power of impeachment.

He added that the resolution also goes against the principle of transparency and accountability which is violative of the right of the people to information based on Section 7 of the Bill of Rights which is enshrined in the Constitution.

“While we are all searching for the truth, the Supreme Court now under Chief Justice Renato Corona is doing all it can to bury it, especially the facts and circumstances where he showed partiality so that Arroyo can escape accountability for her crimes against the Filipino people. If the truth does not come out in the impeachment trial against Corona we have no one to blame but Corona Supreme Court. This is no different from Arroyo’s executive confidentiality to prevent the witnesses and evidences be presented in the congressional investigation of NBN ZTE deal and Hello Garci scandal,” added the progressive solon. 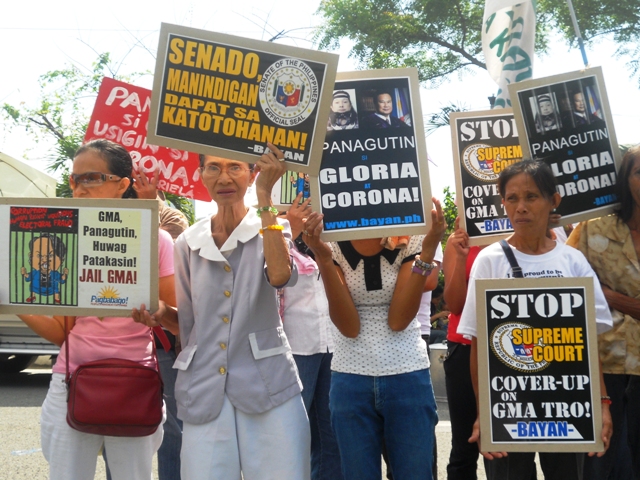 Dizon called on to the Senator judges not to use the impeachment hearing for grandstanding for the 2013 or 2016 elections. Dizon stressed that Corona has betrayed public trust and therefore, he is no longer fit to be chief of the highest court in the land.

He stressed that Arroyo appointed Corona to be her protector against the possible cases she would face after her presidency.

“It is clear as day that Corona was appointed by Arroyo so the SC can be her gatekeeper when the time comes that people will make her accountable. I appeal to the Senator judges to remove Corona from the SC. The only way to bring back the trust of the people in the SC is to remove Corona.”

Meanwhile, Bayan said, the Corona’s impeachment and Arroyo’s arraignment remind the people that much still need to be done to hold Arroyo truly accountable for all her crimes.

“It was the SC TRO that precipitated the filing of a criminal case against Arroyo, in an effort to render the SC TRO moot and keep Arroyo in the country. We reiterate our position that Arroyo should be jailed for the criminal case she faces before the Pasay RTC. Her continued hospital detention smacks of special treatment and double standard. Her accountability should not be limited to the 2007 elections but should cover gross human rights violations, plunder and wholesale election fraud 2004”

The groups also criticized President Aquino for being sluggish in holding Arroyo accountable. Bayan said the TRO was the result of the failure of Aquino to prosecute Arroyo during his first year and a half in office. “Arroyo’s attempt to escape justice was helped by no small means by the inability of the Aquino government to file cases in court against the former president. And were it not for Arroyo’s attempt to flee, though the TRO, the Comelec would have not immediately filed the case of election sabotage at the Pasay RTC.”

Gabriela Women’s Party Rep. Liz Ilagan also said DOJ Secretary Leila De Lima’s testimony brings to mind how the Aquino administration almost bungled the case against Arroyo with delays in the filing of cases against the former president. “Several other cases have been filed against Arroyo, all of which are moving at a pace so much slower than a snail’s. Have they not learned their lessons? Justice delayed is justice denied,” said Ilagan.

“The lethargy and indolence with which the Aquino administration continues to direct the prosecution of the plunder and human rights cases against Mrs. Arroyo casts doubt on President Aquino’s determination and sincerity in pursuing accountability. This remains a cause for outrage and unrest,” she added.

Paulo Quiza, spokesman of Bayan-National Capital Region also said Aquino has done nothing to ensure that Arroyo and her cohorts will be prosecuted for their numerous human rights violations cases, election fraud, corruption among others “If Aquino is really serious in prosecuting the former president, then his government could have filed cases in various courts against Arroyo. What’s more disappointing is that, to date, no serious case against Arroyo has been filed directly by the Aquino administration,” Quiza added.

Bayan said that while Corona’s removal from the SC will, to some extent, help in the prosecution of Arroyo, the people should be reminded that it is still the Executive branch which has the ultimate responsibility in ensuring that GMA is held accountable.