CORAZON DE JESUS, San Juan City — Whenever Susana Ybona, 47, wakes up every morning and sees the galvanized iron sheet in front of her home, she quivers at the thought of an impending demolition.

“We have been living here for almost 25 years already. We lived here even before my eldest child, who is now 23 years old, was born. And now the (local government) wants us out,” Ybona told Bulatlat.com in an interview.

“Pocket demolitions” in Corazon de Jesus started several years ago to give way to San Juan City’s government center. The local government for the past year, however, has intensified its efforts to drive away poor families for the construction of its new city hall, reportedly patterned after the United States’ White House.

Ybona and her family are among the residents of Corazon de Jesus in San Juan City who lost their homes because of a violent demolition on January 25, 2011. They were among the families who stood up against the demolition team. Instead of accepting the relocation site in Rodriguez, Rizal, which they deem is far from their source of livelihood, her family decided to move to another vacant lot within their community. 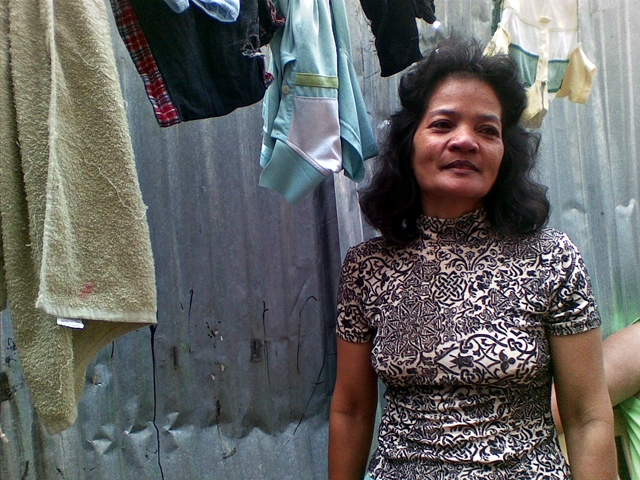 They were trying to start with their lives all over again when on January 11, 2012, another demolition in Corazon de Jesus took place. Another 123 families lost their homes despite the fight and the barricade that the people have put up. While Ybona’s house was not affected, their family helped in protecting the community.

They heard rumors that the recent demolition would be the end of the local government’s efforts to clear the community, possibly, she said, to confuse the residents whether to help their neighbors or not. But for Ybona, for as long as the galvanized iron sheet in front of her home, which separates the “cleared” land from the community, remains, so do the threats of demolition.

Ybona, like most families whose homes were demolished in 2011 demolition, said they did not accept the relocation site offered to them because it would bring them far from their means of livelihood. Her husband is a tricycle driver, who would be considered lucky if he is able to bring home around $9.30 for a day’s work.

Given their meager income, Ybona shoulders the responsibility of making sure that her husband’s income would be able to cover their daily needs.

She used to have a variety store in their former house, which was open 24 hours a day. But she lost it because of the demolition. “I was not able to save anything from my house. Not even a single strand of our electric wires,” Ybona said, “We are just about to start with out lives.”

Ybona said she still cries to this day whenever she thinks of the sufferings they endured in the past few years. Her children used to study in private schools because she believes that quality education is the key to a brighter future. But her eldest child was recently forced to stop going to school. She was a semester away from finishing her college degree. She now works as a crew for a photo studio.

Even if their new home has not yet been demolished, her family still supported the fight of their neighbors, knowing that they too would soon face another fight for their own home. Ybona said her husband was not able to go out and work for a week in preparation for the people’s barricade before the January 11, 2012 demolition.

“We would not allow another demolition to take place in our community. We are ready to fight for our rights to remain here,” she said.

Ybona belied accusations that poor families in Corazon de Jesus deserve to leave their homes because they do not pay their taxes. “We religiously pay our taxes even if we do not have a regular income. I pay the city government whenever I need to renew the franchise of our tricycle. Our electric and water bills, and all the basic goods and services that we are consuming have taxes in it.”

Ybona said her family would never leave Corazon de Jesus despite the continuing threats of demolition. “Our lives would all the more become difficult if we leave here. We will be far from our sources of livelihood.”

A few days after the 2012 demolition, at around 8:00 a.m., Ybona said soldiers were seen near their community.

“They were stationed near the school. The soldiers were looking at the people who were passing by,” she added, “I think they are trying to scare away those who remain in the area. But if your are well aware of your rights and principles, one would not be scared even if they send a battalion of soldiers.”

Conditional cash transfer is of no help

“They are already spending so much for the CCT. If they really want to help then they should prioritize a housing program,” she said.

Ybona is a recipient of the conditional cash transfer. The funds for said project was sourced through a loan from the Asian Development Bank. It gives out money to families who comply with the conditions, such as availing of pre and post-natal care, check-ups and vaccinations for children. The maximum amount is P300 ($6.97) per child, with a maximum of three children per family, for their education. A family with three qualified children may receive a total of P1,400 ($32.55) a month or P15,000 ($348) annually for a maximum of five years.

But in reality, Ybona said, the cash they are receiving is always delayed. Last January 30, 2012, she was able to receive the allotment for the months of November and December.

“Nothing has changed in the our lives since we became a recipient of the conditional cash transfer. A mere $0.23 a day for my children is not enough.”

In this year’s Ulat Lila, an annual assessment of the women’s situation in the country prepared by the Center for Women’s Resources, it said, women and children are most vulnerable to the effects of the continuing demolition and eviction of the so-called informal settlers in Metro Manila.

“Most of demolition that took place turned violent. The urban poor who are merely fighting for their rights and homes are placed behind bars. An example would be what happened in Corazon de Jesus in San Juan and in Sta. Lucia in Pasig City,” Ulat Lila read.

The report described the relocation sites offered to the urban poor as “not conducive for humans because it hardly has access to electricity and water supply, sources of livelihood and school for the children.” It added that relocation sites, which relocatees have managed to improve over the years are facing yet another threat of demolition to give way to government projects such as in Tondo, Manila.

“If only there is sufficient salary and work available for the urban poor, they would be able to pay for decent housing,” the report read, “If only there are opportunities in rural areas, they would not have migrated to urban areas to look for work.”

More demolitions are expected as Aquino pushes for his public-private partnership program. Among these projects are the Quezon City Central Business District, Aqueduct Improvement Project and the National Government Center in Quezon City, Northbay District Project in Navotas, Laguna Lake Dike, New Bilibid Prison in Muntinlupa City, and the Port Area in Manila, among others.

Ybona added, “We will remain vigilant. We continue to consolidate our strengths against any threat of demolition.”