Coming from a peasant family and orphaned at a young age, Nanay Pining never thought that she would become part of Gabriela, singing in front of thousands of people, and doing her share in the struggle of women and the Filipino people.

MANILA — After a protest action at Chino Roces Bridge, Crispina Arellano Tolentino, more known to her family and comrades as Nanay Pining, approached Gabriela secretary general Lana Linaban, saying that she felt like crying. When asked why, Nanay Pining said she is sad because of the country’s worsening conditions.

“Still, you should be happy that you are still alive. We have comrades who are no longer alive to join us in our struggle. Maybe I would die before you do,” Linaban told Nanay Pining, “You should celebrate. You are a hero.”

To this, Nanay Pining answered in jest, “I am no hero. Heroes are already dead.”

On stage, during protest actions, Nanay Pining is best described as a typical member of Gabriela — a strong-willed Filipino woman. She sings progressive songs with all her heart. Her chanting resonates during rallies, as she joins hands with other progressive activists in calling for genuine change. 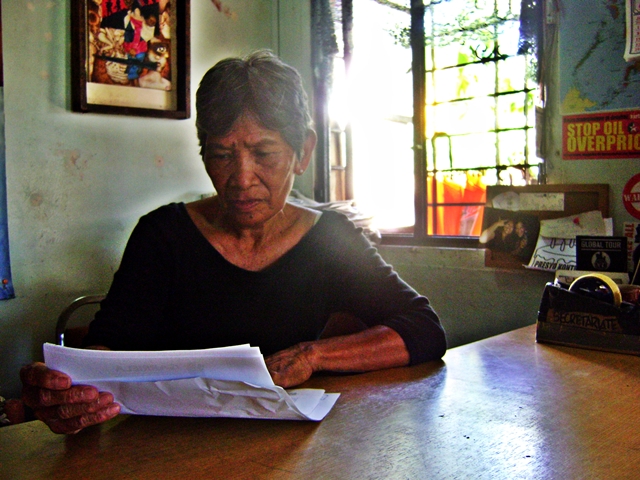 But on ordinary days, if there is such a thing for full time activists, Nanay Pining is often quietly working, focused on doing her assignments and running errands for Gabriela, the largest women’s group in the country. Nanay Pining, 75, has been part of the women’s movement for almost two decades now.

“My own experience as a woman is enough to convince me that Filipino women are suffering from the rotting system in this country. Every song I sing mirrors what I went through and what thousands of other women, whom I do not even know, are also experiencing,” Nanay Pining told Bulatlat.com.

From a peasant family

When asked how her childhood days were, Nanay Pining’s eyes welled up. “It was very difficult,” she said.

Nanay Pining was born in Samal in Davao, a province south of the Philippines. She is the youngest among nine siblings. Her parents died – his father first and then, months later, her mother – when she was only two years old. She could no longer recall how or why her parents died. But what was vivid to her were the hardships that they went through after their parents’ death. Her eldest brother tried to fill in the shoes of their parents at a very young age.

“We worked under the scorching heat of the sun. At age 7, I already did various tasks to help my siblings in the farm work. My main task is to feed the pigs,” Nanay Pining said. But on top of their already poor living conditions, she added, they do not own the land that they were tilling.

Nanay Pining dreamt of becoming a teacher, which she knew she would never be able to fulfill given their impoverished conditions. But she still managed to finish seventh grade in a free night school offered by Harvardian College. “I studied with other poor peasant children, who, like me, wanted to learn,” she said, “If not for such an opportunity, I might not have been able to go to school at all. I could not go to a regular school because I had to work at daytime.”

But more opportunities came to Nanay Pining’s life. Sometime in 1957, Nanay Pining and her sister decided to buy a cheap boat ticket to Manila. Their cousin, who lived in Makati, needed someone trustworthy to take care ofher baby. Months later, Nanay Pining found a job as a sewer in a barong factory, near Quiapo, Manila.

“We were paid 10 centavos per barong. And I was able to sew two to three barongs per day. The transportation costed only about 10 centavos from Makati to Quiapo, so it somehow covered our expenses,” she said.

Nanay Pining married Leonardo Tolentino in 1966. She stopped working as soon as she gave birth to her first child. Her husband is a mechanic who receives the minimum wage.

After giving birth to their fourth child, Nanay Pining felt the need to help her husband in earning a decent income for their growing family. She then washed clothes of families and received meager income to augment their daily needs. On Thursdays, she washed clothes for the family of Petite Peredo-Calaguas, then secretary general of Gabriela.

She became close to Calaguas. One day, Calaguas asked Nanay Pining if she wanted to work for Gabriela as a property custodian. “At first, I did not want to. I knew that all those working in Gabriela have college degrees. I do not have one.”

Nanay Pining said it was Emmi de Jesus, now a Representative of Gabriela Women’s Party, who managed to convinced her.

Sometime in August 1989, Nanay Pining went to Gabriela’s office for her first day of work. “I was assigned to answer phone calls and make sure that visitors would sign in our logbook.”

“Members of Gabriela kidded me because I was very strict. It was my work to make sure that all the visitors would sign their name. So I made them do it. I did not know that I asked leaders of Gabriela to sign their names too,” Nanay Pining said, laughing as she recalled her first day of work at the women’s rights group.

At first, she considered it as just her employment. She received a humble salary for the service she is rendering for Gabriela. Eventually, she attended talks and seminars on the Filipino people’s struggle, which she enjoyed very much. A few weeks later, she was invited to attend a protest action, where she saw a man, on a wheelchair, actively participating in the rally.

“I said to myself, that man was so determined to join the protest action despite his disabilities when here I am, whole and very much capable,” she related. Since then, Nanay Pining took her role in Gabriela much more than just work but as a service to her fellow Filipinos.