A witness and participant in the Filipino people’s struggle

According to Nanay Pining, one of her most rewarding experiences in Gabriela was when she became a member of Sining Lila, their cultural group, in 1990. “I volunteered. I was a former member of the choir in our parish,” she said, “I am not a good singer but I want to contribute my talent.”

“I believe that you can reach out to more women, more people through songs. Our songs speak of the hardships that all of us are going through,” she said.

During her first performance on stage, Nanay Pining said she was shaking. “I am a peasant from the province. Now, all of a sudden, I was in front of so many people to sing songs that describe our situation. Who was I deserve all of these?”

Among her favorite songs that Sining Lila composed are “Babae” (Woman) and “Awit ng Isang Ina” (A song of a mother). The “Awit ng isang ina”, she said, reflected her own experiences as a mother to her children during those difficult years. “Women offer their blood and sweat in giving birth to her child,” she quoted from the song, “Every time I hear or sing that song, my heart feels like it is being crushed.”

Being a member Sining Lila has brought Nanay Pining to places or events she never imagined she would be able to go to. “Women should not be confined within the four walls of a house. They, too, like me should go out and explore what is out there,” Nanay Pining said.

Aside from being a member of Sining Lila, Nanay Pining remained active in joining protest actions calling for genuine change that would benefit more Filipinos. One of the most memorable events, said Nanay Pining, was when she joined a rally at the height of the NBN-ZTE broadband deal scandal under former president Gloria Macapagal Arroyo, where they held a solidarity action for whistleblower Rodolfo “Jun” Lozada, Jr.

“We were at EDSA shrine when the police aimed their cannons at the protesters. I ran really fast. I was afraid of being trampled by the stampede,” she said.

Nanay Pining also experienced being brought to the police station in United Nations avenue after they were apprehended posting progressive posters. “Of course I was very nervous. But I knew that my comrades would take care of us,” she said, “My children saw me on television.”

She also joined several medical and fact-finding missions in highly militarized provinces. Under Arroyo, Nanay Pining said she joined a medical mission in Mindoro where she met former Armed Forces of the Philippines Major General Jovito Palparan, known among activists as “The Butcher,” for implementing the bloody counterinsurgency program, Oplan Bantay Laya.

“He is tall and thin. He was wearing his military uniform at that time,” Nanay Pining recalled, “He asked why I went with the team, saying that it was a very dangerous mission and should the New People’s Army (referring to the armed wing of the Communist Party of the Philippines) decide to attack us, the military would have no choice but to ‘defend’ us.”

Nanay Pining said she sensed the sarcasm that Palparan was trying to imply. Oplan Bantay Laya, of which Palparan is the main implementor, did not distinguish between legal activists and armed revolutionary groups.

Her experience in Mindoro did not deter Nanay Pining from joining other fact finding missions. In the Cordillera region, where there is open pit mining, she confronted a soldier. “Grandma, you should not be here. Don’t you have anything else to do?” Nanay Pining said, quoting the soldier. To this she replied, “Why? I have every right to be here.” 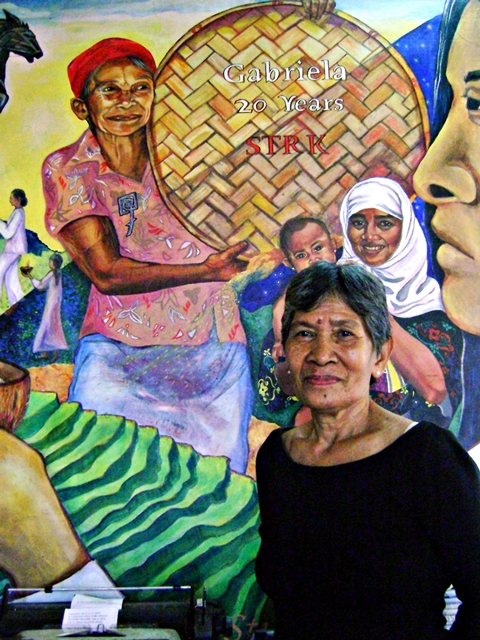 “I want to experience and see for myself what my fellow Filipinos are facing. And, indeed, they are in too much poverty,” Nanay Pining said.

Among the cases that Gabriela handled, Nanay Pining said, she would never forget “Nicole,” a Filipino woman raped by a American soldier Lance Cpl. Daniel Smith. She attended pickets and protest actions launched by various progressive women’s organizations to demand justice for Nicole.

“I still believe that the Filipino people won that fight,” she said. “It was the the government’s failure to protect and pursue justice for her that made her retract her statement.”

When asked who among the women progressive leaders she looks up to, Nanay Pining said that it is former Gabriela Rep. Liza Maza. “She is definitely my idol. She knows how to get along with other people,” Nanay Pining said proudly, “She is a good leader and very efficient in explaining issues that Filipino people are confronting.

“Emmi (de Jesus) is also a good leader,” she added, “During the Flor Contemplacion days, (referring to an overseas Filipino worker who was sentenced to die in 1995) I felt Emmi’s passion to serve and also her frustration over those who were in power but did not lift a finger to save Flor Contemplacion.”

In more than two decades that Nanay Pining has served the Filipino people through Gabriela, she said, she has learned a lot of lessons along the way. She was recognized and honored by Gabriela during its 25th founding anniversary as one of the 25 women who showed the mettle, creativity and bright future of the women’s alliance. She was praised for being one of the women who have given their fellow women inspiration and contributed much to Gabriela’s strengthening, de Jesus said.

Nanay Pining believes that while the continuing and worsening poverty remains a burden to most Filipino women,some things have changed over the years.

She said women now are more aware of their rights. More and more women, she added, are coming out to voice their experiences such as victims of violence against women and children, which has long been treated as a mere domestic affair.

On March 8, Nanay Pining said Filipinos should unite in struggling against the country’s poor economic conditions. “I saw how women have become creative in augmenting the family’s meager income, such as selling afternoon snacks or food,” she said, “At the same time, they are also one of the most affected sectors whenever there is an increase in prices of basic goods and services.”

While Nanay Pining was not able to fulfill her dream of becoming a teacher, she feels that she has become somehow, a teacher to the thousands of people she has met and performed in front of during protest actions. She may be 75 years old now but Nanay Pining remains young and vigilant at heart. “I still want to learn many things so I could give back to our country even more than what I am doing right now.”

For Nanay Pining, there is no need to label a person as a hero. “It is more than enough that you offer your talents and abilities to our country. Even the smallest effort could contribute to the victory of the Filipino people.”