Related story: Human Rights Defenders, In the Line of Fire

In a paper presented to the Conference on Defending Human Rights Defenders, February 24 at the Amnesty International UK Human Rights Action Centre in London, Edre Olalia, secretary general of the National Union of Peoples’ Lawyers (NUPL) and Cristina Palabay, spokeswoman of Karapatan, revealed that there are 37 human rights defenders slain under the Aquino administration.

“Even with a new government that promised to pursue reforms in governance, the killings, disappearances and violations continue. Being a human rights defender still means putting one’s life on the line,” they said in a paper entitled “From Defenders to Victims: The Plight of Human Rights Defenders in the Philippines Amidst Continuing Impunity.”

Karapatan has documented 67 victims of extrajudicial killings in the one and a half years of the Aquino’s presidency. There is approximately one killing per week. Three out of nine victims of enforced disappearances are human rights defenders. Most of them are farmers, indigenous peoples, workers and the urban poor who are defending their right to land, ancestral domain, livelihood, decent housing, jobs and other basic rights.

Under the United Nations Declaration on the Right and Responsibility of Individuals, Groups and Organs of Society to Promote and Protect Universally Recognized Human Rights and Fundamental Freedoms, human rights defender is anyone working for the promotion and protection of human rights. This broad definition encompasses professional as well as non-professional human rights workers, volunteers, journalists, lawyers and anyone else carrying out, even on an occasional basis, a human rights activity.

Olalia and Palabay cited the extrajudicial killing of Italian missionary Fr. Fausto Tentorio who was a vocal critic of intense military operations in Lumad communities in Mindanao. They also mentioned that ten journalists have already been killed under the present administration.

The conference was organized by the London-based Haldane Society of Socialist Lawyers, Amnesty International (UK) and the 19-country member European Lawyers for Democracy and Human Rights (ELDHR).

In direct line of fire

Members of Karapatan, in particular, have been victims of human rights violations. During the reign of former president Gloria Macapagal-Arroyo, 34 human rights workers were killed in the line of duty. The most prominent cases were those of Eden Marcellana and Eddie Gumanoy, Benjaline Hernandez and lawyer Juvy Magsino.

Regional and provincial offices of Karapatan were raided, lobbed with explosives or burned to sow terror, the paper stated. Members were subjected to surveillance; some stalked and harassed.

Like other people’s organizations, Karapatan has been subjected to vilification campaigns, often labelled as a communist front to justify the attacks on its members.

Both the NUPL and Karapatan criticized the continuing criminalization of human rights advocacy. Karapatan volunteers have been slapped with fabricated criminal charges such as those in Southern Tagalog, Cebu, Southern Mindanao Region and Negros.

Palabay said further attacks against human rights defenders are looming with the counter-insurgency program Oplan Bayanihan which, she said, is no different from Arroyo’s Oplan Bantay Laya.

Palabay cited the threat against 72 leaders of people’s organizations and institutions, including leaders of Karapatan in Southern Tagalog. “The case of the Southern Tagalog 72 and the threat that warrants of arrests may be issued against them despite the dismissal of the same charges previously is illustrative of the situation of human rights in the Philippines – threatened, vilified, heaped upon with fabricated charges, imprisoned, silenced,” Palabay said.

Olalia said human rights lawyers are not insulated, citing the case of labor lawyer for progressive unions Remigio Saladero, one of the so-called Southern Tagalog 72. Saladero was imprisoned by the past government but the charges were eventually dismissed. “The charges have been revived under the present government, and the issuance of totally groundless arrest warrants anytime remain a Damocles’ sword,” Olalia said.

“There remains a marked passivity and even nonchalance on the part of the current government as a whole as it largely fails to measure up to its own rhetoric to run after human rights violators, let alone the most remorseless ones. It leaves the herculean tasks to the victims themselves or their relatives and human rights groups to search for justice. Worse, these perpetrators remain in the security forces, ever ready to pounce on new hapless victims,” the paper read. 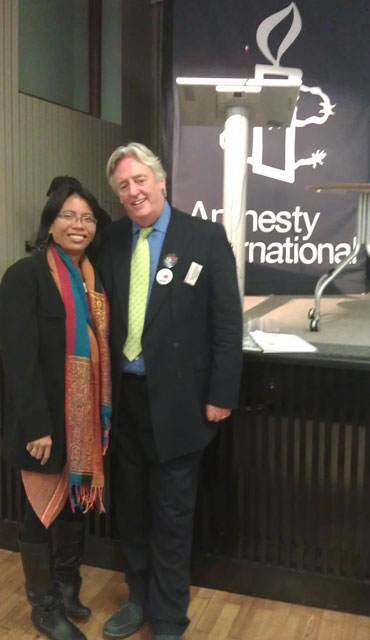 Cristina Palabay, spokeswoman of Karapatan, with Michael Mansfield of Queen’s Council and president of the Haldane Society of Socialist Lawyers (Contributed photo / bulatlat.com)

Olalia informed the delegates from several European rights organizations, unions and prominent lawyers like Michael Mansfield and Gareth Pierce and lawyers’ groups, British media as well as key Members of Parliament of the House of Lords about the fugitive Gen. Jovito Palparan Jr.

Palparan, favorite general of Arroyo, is charged with kidnapping and serious illegal detention in relation to the enforced disappearance of University of the Philippines (UP) students Karen Empeño and Sherlyn Cadapan. A warrant of arrest has been issued against him in December last year. He remains at large.

Olalia asked for support to call on the government to step up its efforts to arrest him and to be on the look out for him should they find him somehow somewhere. He said that not a few delegates likened the case of Palparan to the case of Chilean dictator Augusto Pinochet who had evaded arrest and punishment for the longest time.

“Impunity persists because Aquino, despite all his rhetoric on human rights, has been passive in making former Pres. Arroyo and her top generals accountable for rights violations, perhaps because his administration promotes the same brand of terror and violence on the ground,” Palabay said.